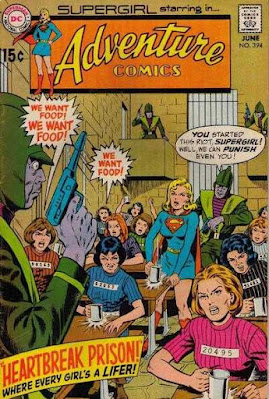 It has been a while since I reviewed a back issue from Supergirl's history here. Recently my mind has been thinking about Adventure Comics #394.

When I was reviewing the Black Orchid stories here recently, I noted that in one story the Orchid implied she had been in prison in the past. Was it referencing this?  Why not take a closer look at this story?

Now I have to say that this is one crazy story. Written by Robert Kanigher, it takes one insane plot leap after another. This is a classic Silver Age story where an insane amount of things happen in a mere 13 pages. It even ends with a bit of a mystery! So settle in and be ready for a roller coaster as Supergirl tries to save the universe from a doomsday weapon from within an interstellar prison.

The art is by Kurt Schaffenberger and it is just gorgeous. In this story, with all the wild turns, we get to see the breadth of Schaffenberger's skill, from action to angst to drama to campus silliness. Over the years, I have come to really love his artwork. This is a shining example.

On to the book. 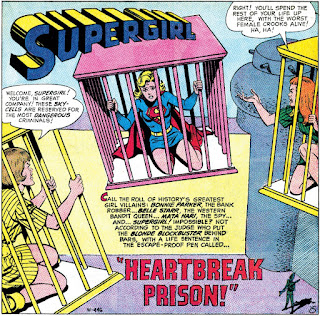 'Heartbreak Prison!' opens with a shot of Supergirl in a 'sky cell' surrounded by some angry looking prisoners. The opening paragraph compares Supergirl to some of the worst 'girl villains' out there - Bonnie Parker, Bell Star, and Mata Hari!

But such a great panel by Schaffenberger as you get the sense of how distraught Supergirl is just with her body language and expression. 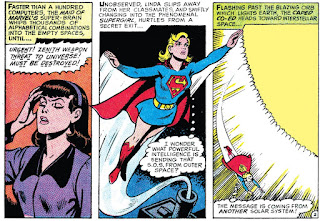 The story opens at Stanhope College where Linda Danvers is listening to some groovy music with her friends. But in the middle of this musicfest, she receives a garbled message, only certain letters and sounds being transmitted.

Using her super-intelligence, Supergirl fills in the blanks and speeds off to find the Zenith Weapon, a universal thread.

Again, solid panels by Schaffenberger. I love that middle one braking the panel gutters.

And this might be the first time I have heard Supergirl called the 'Caped Co-Ed'. 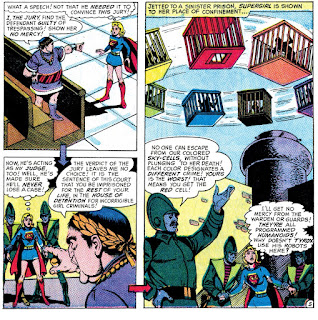 Following the mysterious SOS. Supergirl approaches a planet surrounded with warning signs that it is the home of the Zenith Weapon.

Rather than batter an endless swarm of robot sentries, Supergirl allows herself to be brought the Tyrox, the planet's leader. Even Supergirl finds it interesting that the robots don't follow her into the court.

There Tyrox, dressed like a Caesar, acts as judge and jury, sentencing Supergirl to the house of detention for defying his will and disregarding the warnings.

In the prison, Supergirl is pushed into a 'sky cell'. 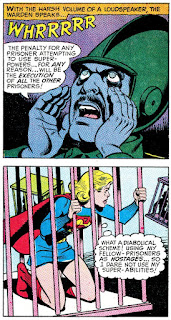 Once inside the cell, Supergirl is warned that the use of super powers will result in the execution of all the other prisoners.

And Supergirl gets an earful from her fellow prisoners. Each one harkens from a different planet all paying tribute to Tyrox. Each did something rebellious from vandalizing a Tyrox statue to blowing up a rocketship. 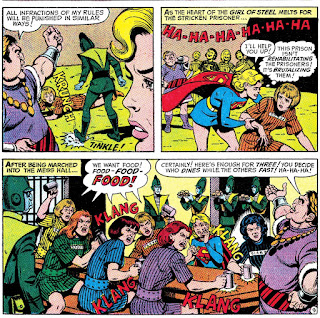 The prison is hardly an easy road. Tyrox puts the girls through some horrible tasks. He makes them blow up balloons which seem to poison all the other girls except Supergirl. When one of them collapse, the guard crushes her glasses under his foot. (Is it me or does this girl who lost her glasses look like Velma from Scooby Doo? Jinkies!)

He starves them, sending out only enough food for a couple of them and having them fight amongst themselves for scraps.

Once again, within the skirmish, one of the guards destroys a personal object of one of the prisoners, this time a watch.

All right, so far, this has been playing out like a women's prison film from the 40's. But wait, things are about to get wonky.

Back in her cell, Supergirl is thrilled when a bird flies in and settles down. We'll call that lucky event #1. 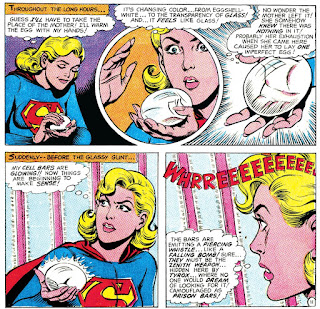 The bird lays two eggs within the cell.

One of the eggs hatches almost immediately. The mother bird and the baby bird immediately fly off. That's one of those crazy things in the Silver Age that we have to roll with.

But then, the second egg seems to turn into glass. The mother bird's exhaustion must have led her to lay this empty egg.

Even more incredibly, the presence of the glass egg makes the bars of Supergirl's cell start to vibrate. Supergirl's prison cell IS the Zenith Weapon, hidden in plain sight.

So if the bird hadn't landed there just when it needed to lay an egg only to lay a barren egg which just happens to turn to glass than Supergirl would never have found out about the Zenith Weapon.

That is a lot of lucky coincidences.

And putting an insanely powerful weapon in the middle of place like a prison seems a bit risky. 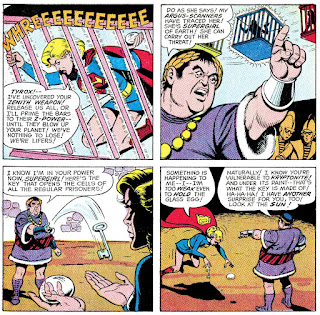 Now knowing about the weapon, Supergirl has an advantage. She threatens to set off the Zenith Weapon, destroying the planet. Why not? She's a 'lifer'.

Supergirl is released and given a key to release the rest of the prisoners.

But wait! The key is Kryptonite! And not only that, Tyrox turns the planet's sun red to depower Kara.

Another twist! Tyrox had some green K in his arsenal, formed into a key, for just such an emergency! And he had a red sun device! He was prepped for a Kryptonian foe I guess! 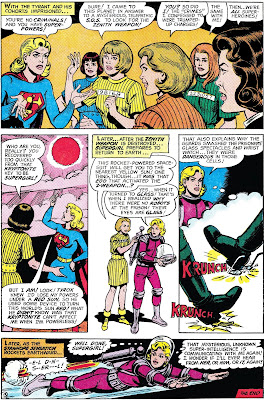 But then one last twist.

The rest of the prisoners break out of their cells and overrun Tyrox and his troops! Turns out they are all super-heroes on their worlds. They each got the same cryptic warning on their worlds and faked their crimes to try and get closer to the Zenith Weapon. When Supergirl discovered where it was, they jumped into action. It's a whole squad of super girls teaming up with Supergirl.

This being Silver Age continuity, Green K only effects super-powered Kryptonians. So under the red sun, it doesn't hurt Kara.

Moreover, she figured out one of the mysteries. Why were those specific devices and mementos destroyed? Because glass (like the glass egg) could trigger the Zenith Weapon. And the watch and he spectacles and even the robots' eyes had glass!

With the Zenith Weapon destroyed, Supergirl is free to go home. But who even sent the mysterious SOS? Will we ever find out?

Okay, don't ask me to explain almost any of what happened in the back half of this story. Perhaps Kanigher was under the influence of something? But there is no denying Supergirl's smart and bravery here. And she looks so dang good by Schaffenberger. So I'll give this a pretty high mark, just for the insanity.


If you are interested in the other story in this issue, you can check out my review here.