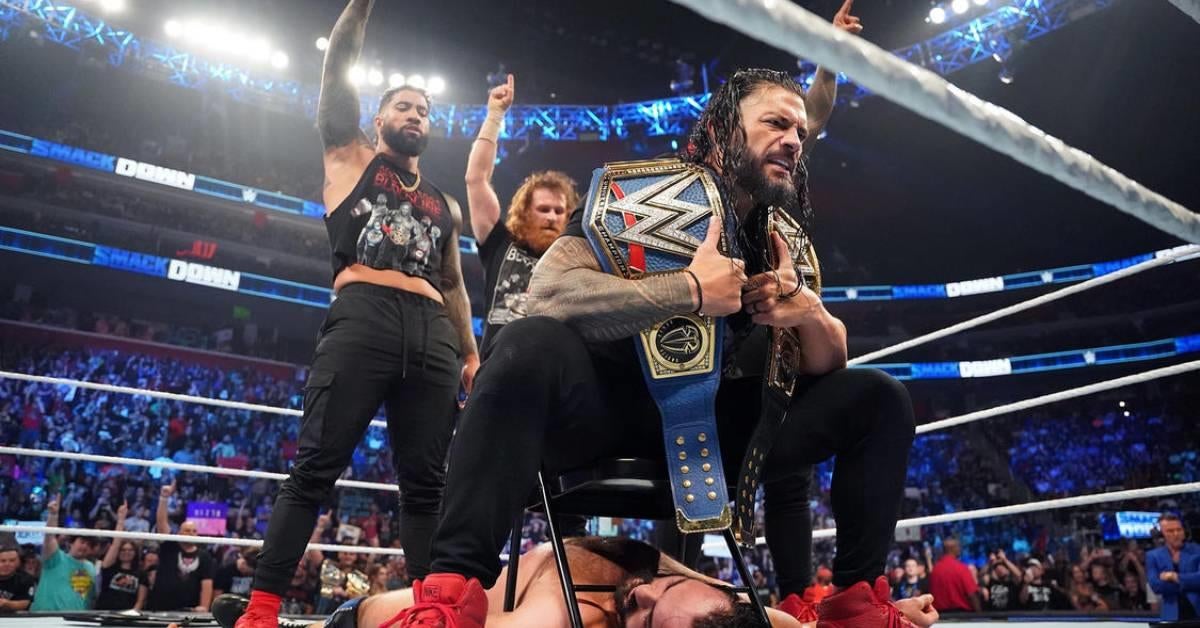 Roman Reigns is currently the Undisputed WWE Universal Champion, having unified the WWE and Universal titles at WrestleMania 38 back in April. And while "The Tribal Chief's" reign has reached historic heights since first becoming Universal Champion back in 2020, there have been plenty of criticisms about his reign ever since WrestleMania. His new WWE contract gives him a much lighter schedule, but it has left Monday Night Raw without a world champion for the past five months and the company is gearing up for its fourth pay-per-view of the year to not have at least one world title match on the card.

The Wrestling Observer's Dave Meltzer reported last week that WWE is looking to push Reigns as "the legend of this generation," which is why they booked him to beat Drew McIntyre at Clash at the Castle despite the UK crowd being entirely behind "The Scottish Warrior." WrestlingNews.co then reported there were no plans to have Reigns lose for the rest of the year and that the plan was always for him to face The Rock at WrestleMania as Champion.

There are, however, some issues with that plan. WrestleVotes tweeted on Tuesday that the situation has grown "complex" as WWE officials don't want Reigns to lose at any point between now and WrestleMania, but still want separate world champions on both brands. There have also been recent reports of the USA Network wanting a world champion back on the Red Brand as well. It's also still up in the air whether or not Dwayne Johnson will be able to compete at WrestleMania.

The situation w/ the world titles & Roman Reigns is "complex" according to a source. They would like to go into "Mania season" & WrestleMania itself with 2 champions, but they also don't want Reigns losing AT ALL prior. I'm told HHH & co are open to all things creatively here.

Triple H talked about the possibility of Rock vs. Reigns happening at WrestleMania during a recent interview with Ariel Helwani -- "I do know this, because I've had this conversation with him. At no time when Rock is making a movie in Hollywood, does he stand in a position, pull off his elbow pads, and goosebumps fill his entire body because of the electricity that 100,000 people or whatever it is are giving him in that moment, and he passionately feels that like no one else. There is nothing else on the planet that gives you that rush that WWE gives you when you're standing in the center of that ring. And I know he knows that. So I know somewhere deep inside of him is that burning thing to go, 'Oh, I gotta feel that one more time. I've got to get in there one more time.'

"Because that clock is ticking on, 'Can he?' Because he looks like a million bucks but believe me, you look as good as you are, you hit that canvas, stuff starts falling off that isn't supposed to fall off you, you know? It's a tough business, the clock is ticking. So if there is a time, it is becoming now. And I know that there's a burning desire for him to take advantage of that time," he added. "It's just a matter of, 'Can he harness all the other things to focus on that long enough for us to get it done?' It's up to him. The platform is certainly there. WrestleMania. L.A. Two nights, we've already got 90,000-plus I believe, sold... the Tribal Chief is is sitting there waiting for him, or anybody else that he wants to, right? It's magic. Magic, magic, magic of the highest levels in in the in the city that he has become in some manner king of, right? And to have that experience one more time, I know that's got to be burning a hole in him. I know that's got to be a desire. It's just, what else what other things does he need to put aside, and can he to make this all work? Because he's juggling a lot. So hopefully the answer is yes, I would love to see nothing more. But we'll see. So to quote you again, 'I'm saying there's a chance.'"