Valkyrie Elysium: your primer to the RPG series ahead of this week’s launch

In many respects, the Valkyrie series is synonymous with PlayStation. The acclaimed first two games – Valkyrie Profile and Valkyrie Profile 2: Silmeria – appeared on the PS1 and PS2 respectively. Now, after a 16 year absence from consoles, the series is back with Valkyrie Elysium.

The new action RPG features an evocative world inspired by Norse mythology, thrillingly fast-paced combat, stunning audio-visual presentation, and a dark, thought-provoking narrative. It’s a fantastic RPG that has its own very distinct vibe, and we can’t wait for you to play it.

While long-term Valkyrie fans are probably already exploring the mysteries of the game’s beautiful world via the recent demo, some of you may be wondering: what’s all the fuss about? Why’s this series so beloved?

With that in mind, and to celebrate the series’ return to its ancestral home on PlayStation, we thought it would be interesting to take you through the history of this revered franchise.

Just before the turn of the millennium, a new bold, new RPG was released in Japan: Valkyrie Profile.

By this point in the PlayStation’s life, the console had made a name for itself as a haven for RPGs, with multiple series, including Final Fantasy, having achieved new heights of popularity on this burgeoning platform.

Valkyrie Profile immediately stood out from the crowd. Developed by tri-Ace (the Star Ocean series), this was a game that dared to be different. It offered a distinctly original take on the genre, combining a stylish setting inspired by Norse mythology, innovative battle system and a narrative structure that rewarded players for their initiative and curiosity.

You took control of Lenneth – a recently awakened Valkyrie, who serves Odin and the pantheon of gods known as the ‘Aesir’. Lenneth is sent out to collect the souls of fallen warriors – known as Einherjar – to aid the gods in their war against the Vanir.

Over the course of her mission, she encounters many warriors – some worthy of joining the gods, others who fight by her side, and starts to piece together the mystery of the force that threatens the gods, and her life before rising as a Valkyrie.

Although it was just the first game, many of the elements that would come to define the Valkyrie series started right here including fast-paced, combo-based combat systems, the recruitable Einherjar, themes of life, death and identity and a richly melancholy tone.

Audiences responded positively to these elements, both in Japan and in North America where the game was released in 2000, and the game sold well. It’s often cited as one of the greats of the RPG genre – something that even more people would discover in 2006…

Fans had to wait a few years for more Valkyrie adventures, but in 2006 the original game made a return for the PSP as Valkyrie Profile: Lenneth.

The original PlayStation version had only been released in Japan and North America, but this perfectly portable port came out in Europe and Australasia too, making it the first time players in these regions could experience the game.

And fun fact: it’s back again! A PSP port of Valkyrie Profile: Lenneth will release later this year for PS4 and PS5, available as either a bonus for owners of the Digital Deluxe Edition of Valkyrie Elysium or a standalone purchase.

Despite that prominent number in the name, the game’s actually set hundreds of years before the original game, and in an alternate timeline. It features many new characters and a new protagonist to control… or should that be two new protagonists?

The story focuses on the Valkyrie Silmeria and the Princess of Dipan, Alicia – two women trapped in the same body. Pursued by the Valkyrie Hrist, the two must work together to prevent a catastrophic war between their two realms.

The game built on many of the elements introduced in Valkyrie Profile, including new Einherjar, updated side-scrolling exploration, and strategic battles that combined the combo-based battle system with new movement options.

The game was a critical success, with reviewers praising its richly detailed world, super-fun combat system and stellar soundtrack by Motoi Sakuraba.

The series returned to handheld devices for its next two entries: Valkyrie Profile: Covenant of the Plume (released in Japan in 2008, North America and Europe in 2009) and Valkyrie Anatomia, released on mobile in 2016. The former featured a dark, mature story of a young man named Wylfred, and his quest to destroy the Valkyrie Lenneth, who he blames for the loss of his father and his family’s subsequent misfortune. The latter is set in an alternate world to the original game. It follows a similar setup, with Lenneth charged with recruiting einherjar to fight for the gods. 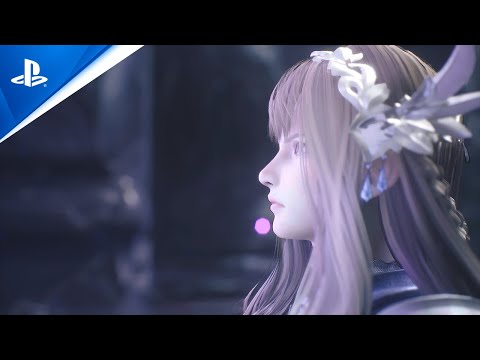 …all of which brings us to now – and the long-awaited return of the Valkyrie Series to PS5 and PS4.

Valkyrie Elysium presents a completely original story, set in a world that teeters on the brink of destruction. Ragnarok – the end of all things – looms on the horizon. With the last of his strength, the All-Father Odin creates a Valkyrie to become an emissary of redemption. Her task: save this doomed world. Descending to the land below, this brave warrior encounters many challenges as she starts to discover the truth behind its impending demise. What will she think of this world… and what end will she choose for it?

The game presents a fresh take on the series that combines many of the series’ defining elements with exciting new ideas. For example, the combat system fuses series stables like finishing moves and combos, with brand new real-time action combat. Recruitable Einherjar are also present and correct and it’s all scored with a remarkable soundtrack by long-time series composer Motoi Sakuraba.

And that ends this very quick run through of the Valkyrie series. Of course, you don’t need to have played any of the other games to enjoy Valkyrie Elysium – it’s a completely standalone title that draws on the rich legacy of the series to create a new adventure that anyone can enjoy.

Valkyrie Elysium launches this Thursday, September 29 , and is available physically and digitally for PS5 and PS4.