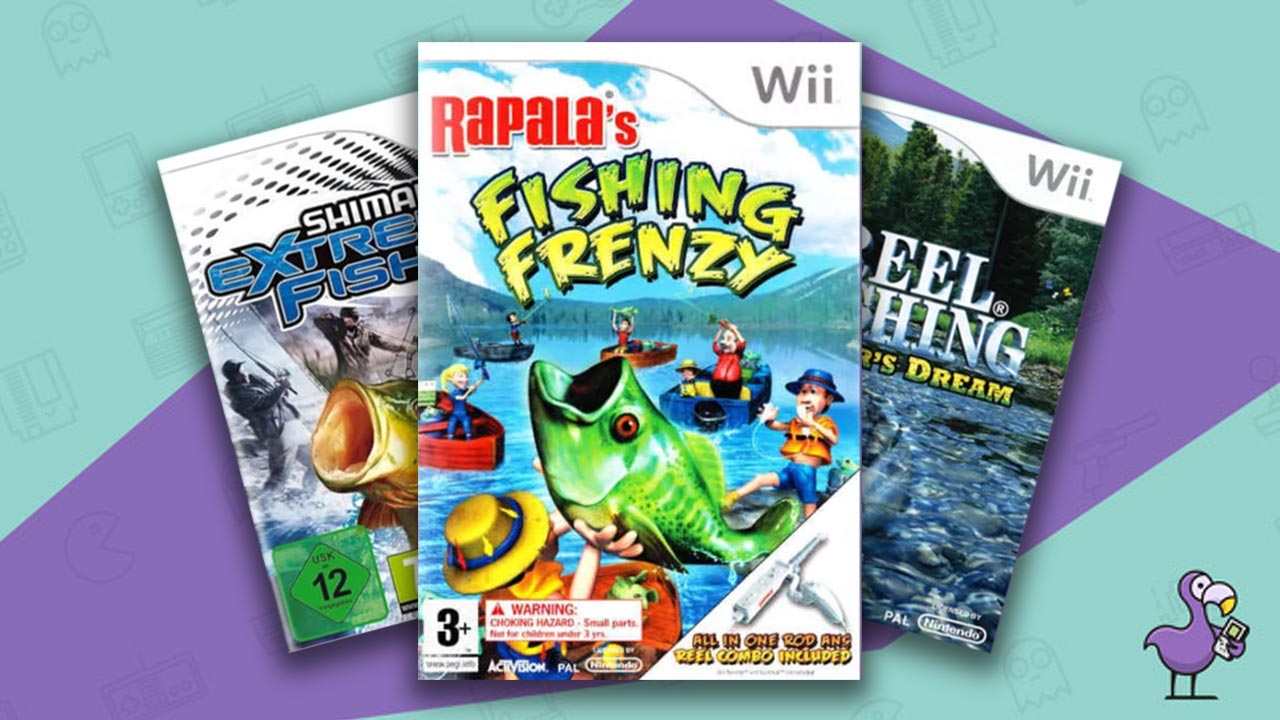 It’s time to grab some bait and head down to the water as we check out the best Wii fishing games!

As Wii Sports showed so successfully, the Wii Remote was a versatile controller that could be used to simulate a wide range of different pastimes.

Developers often tied themselves in knots when trying to shoehorn motion controls into games where they weren’t needed, or didn’t make sense.

But, there were a few genres where waggling the Wii Remote like a person possessed was the only logical plan.

Fishing is definitely one of those genres; casting the line and then reeling in a fish had rarely felt as immersive as it had prior to the invention of the Wii Remote…

Though of course, peripherals for specific games such as the Dreamcast Fishing Controller did a great job of replicating the pastime.

Consequently, there were a huge number of fishing games on the Wii. Even compilation title Wii Play from our list of the best Nintendo Wii games featured a Fishing mini-game.

Some strove for simulation, while others were less interested in replicating real fishing and went a bit crazy.

Which were the best ones though?

Let’s find out, as we check out the best Wii fishing games! 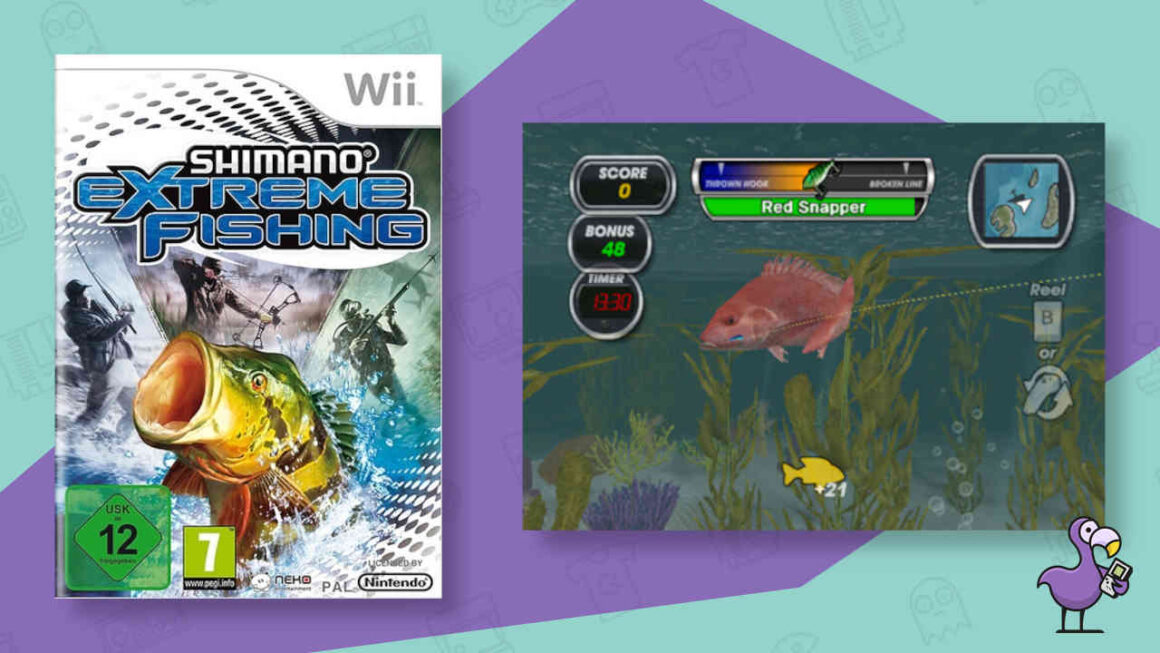 Kicking off our list with one of those titles that’s a bit crazy, Shimano Extreme Fishing goes beyond the fishing rod to offer some unconventional methods of catching aquatic life.

That includes using a bow and even a spear; with the latter, Shimano Extreme Fishing even lets you go diving too.

Excitingly, this can also lead to you being chased by sharks!

Shimano Extreme Fishing offers up to four player multiplayer, and it does have a bit more variety than many other games on this list.

It’s just a shame that the gameplay is a bit lacking, with awkward controls that really hamper the experience.

However, that slightly leftfield focus – on more than just standard fishing – definitely earns it a place on the best Wii fishing games list! 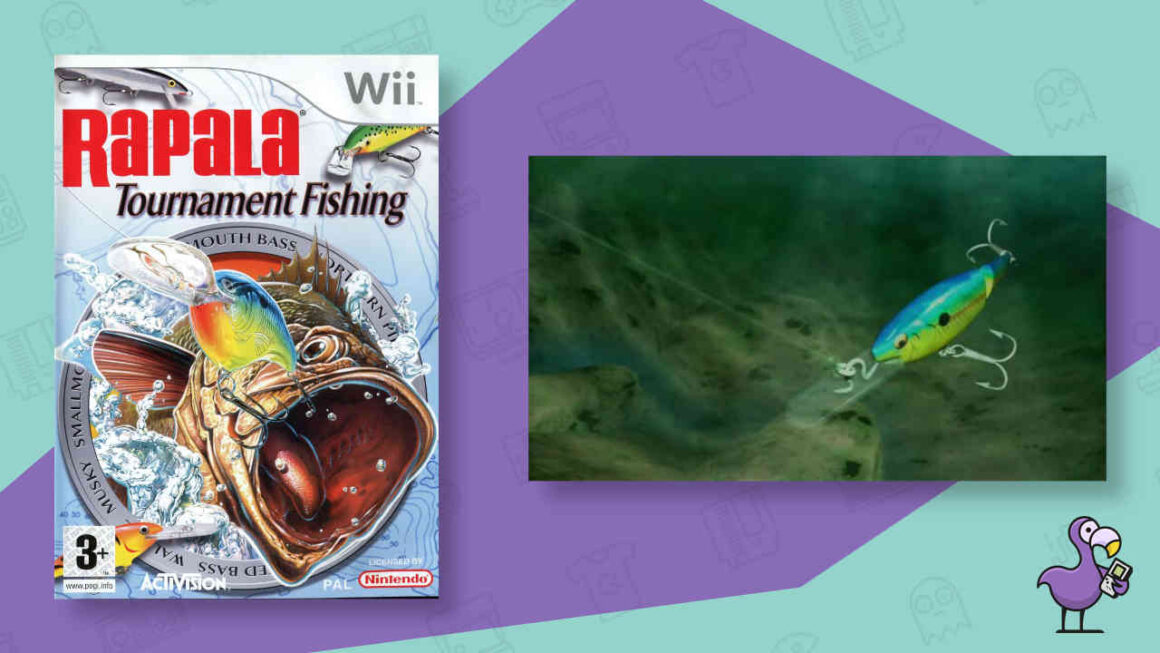 Just as Shimano is a real world brand and therefore allows you to use genuine equipment in its game, so too is Rapala.

And they have numerous games featured on this list.

Rapala Tournament Fishing was the first fishing game to arrive on the Wii. Sadly, despite its huge scope, with 20 tournaments to take part in across 500,000 acres of water, it’s a bit lacking in the gameplay department.

It also has unresponsive controls that really hamper the experience.

The selection of fish is also pretty small, with just over 20 types of fish available to catch in-game.

It’s a genuine shame, because there’s so much to explore here. It’s a good first effort for a Wii fishing game, but there was so much better to come! 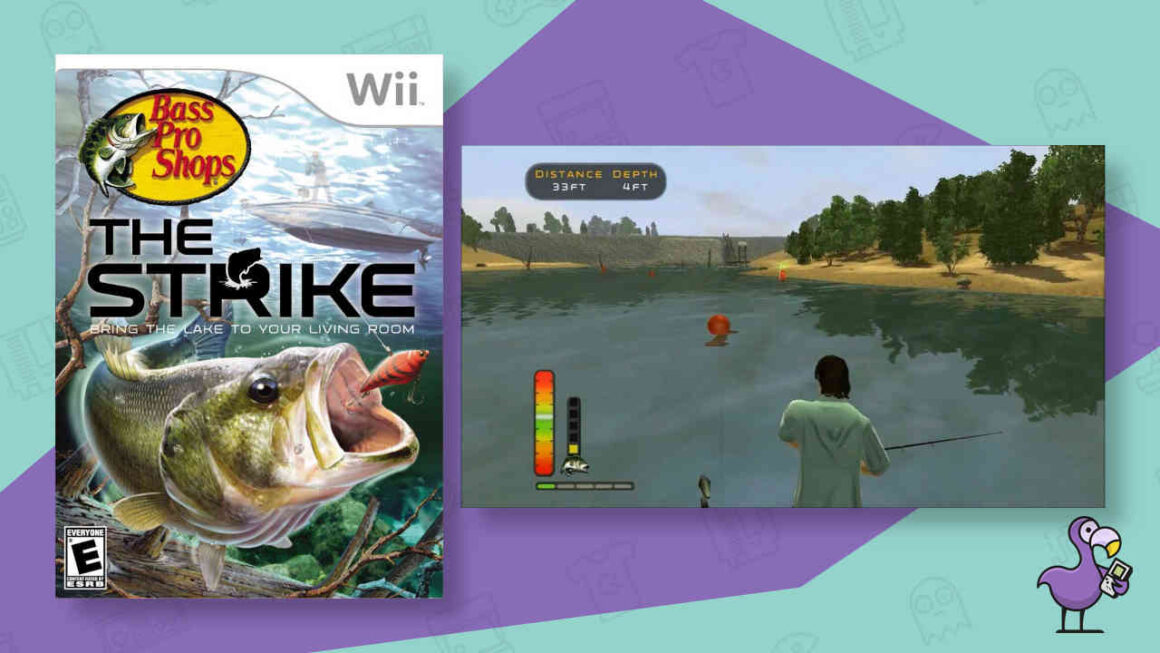 With a custom rod and reel controller, Bass Pro Shops: The Strike (yet another fishing game with licensed in-game gear), certainly seems to make all the right moves before you start playing.

It’s a shame that the visuals are awful and the game’s structure is a little frustrating. But gameplay-wise, the actual fishing action is very satisfying.

Especially if you use the controller that originally came with the game!

Naturally, in a game carrying the name of an actual fishing equipment retailer, the range of different accessories you can collect and use is really impressive too.

It’s not quite enough to push Bass Pro Shops: The Strike further towards the top of the best Wii fishing games list though. The competition is certainly fierce on Nintendo’s classic console!

Interestingly, Bass Pro Shops: The Strike – Championship Edition carries on the series on the Switch. You can take a look at that title on our list of the best hunting games for Nintendo Switch! 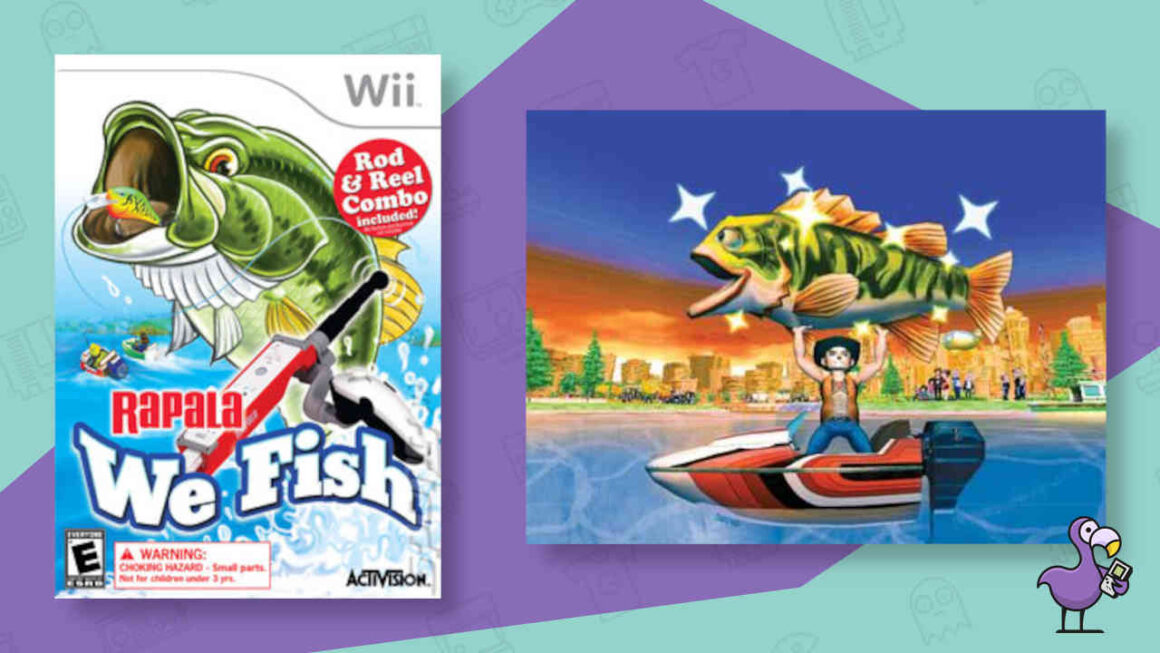 The three games we’ve seen so far have all been based on realism and have also been licensed affairs with genuine fishing equipment prominently featured throughout.

Despite being branded as a Rapala game – and initially being packaged with a Rapala rod and reel controller attachment – Rapala: We Fish forgets all about realism and aims for cartoony, colourful and caricatured action throughout.

It’s a breath of fresh air; the murky, muddy visuals that often plague Wii fishing titles are nowhere to be seen. Instead, there’s a charmingly exaggerated look to just about everything in the game.

Players can use their custom Miis as in-game characters, which don’t look out of place with the game’s general aesthetic. There’s even the option for four player simultaneous multiplayer too.

There’s even kart-style minigames to take part in, complete with power ups. I guess that’s in case fishing, with over 50 nicely designed aquatic creatures to catch, gets a little dull.

The usual issues with awkward controls can rear their head at times, but this is an excellent title – particularly for younger gamers or those players who don’t mind a bit of fun being injected into their digital angling action. 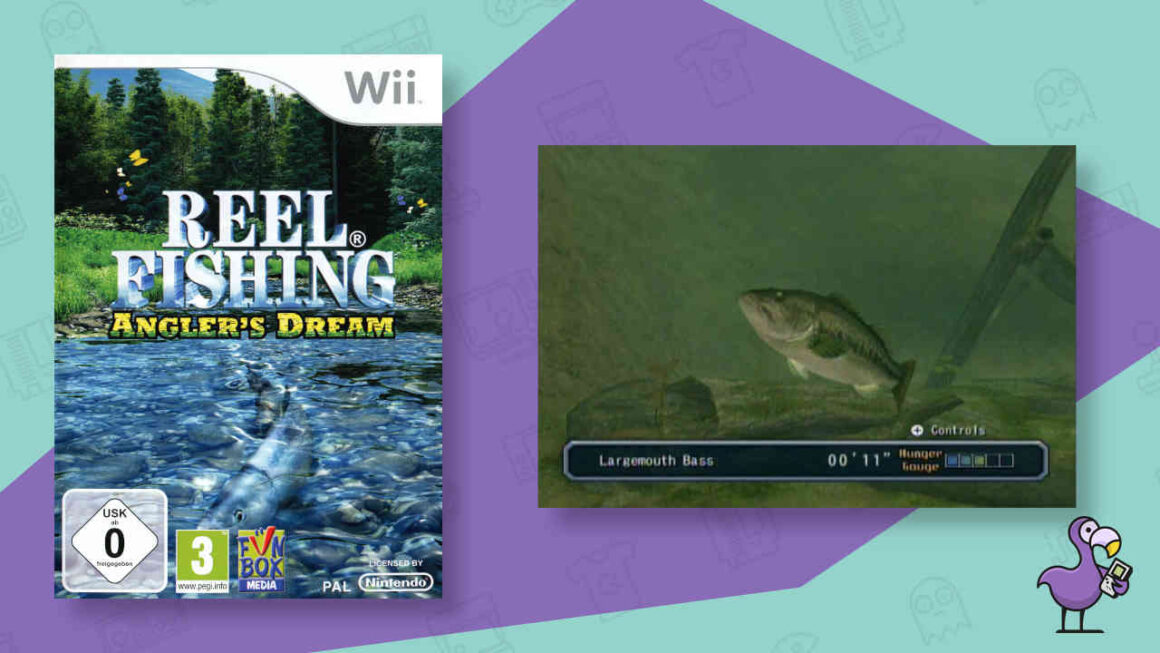 What’s this? A Wii fishing game with no licensed, branded equipment?

Which is to be expected, as the Reel Fishing series have a ‘reely’ long history.

Starting in 1996 on the PS1, the titles have even survived to the present day. The most recent entry in the Reel Fishing series is Reel Fishing: Road Trip Adventure, which appeared on the Switch in 2019!

Reel Fishing: Angler’s Dream really is a great example of these games though, making top use of the Wii’s motion controls.

Not only does it allow players to catch a large variety of fish in plenty of different environments (with catching the Legendary Fish being your ultimate goal!), it also gives players the opportunity to raise fish in their very own aquariums. 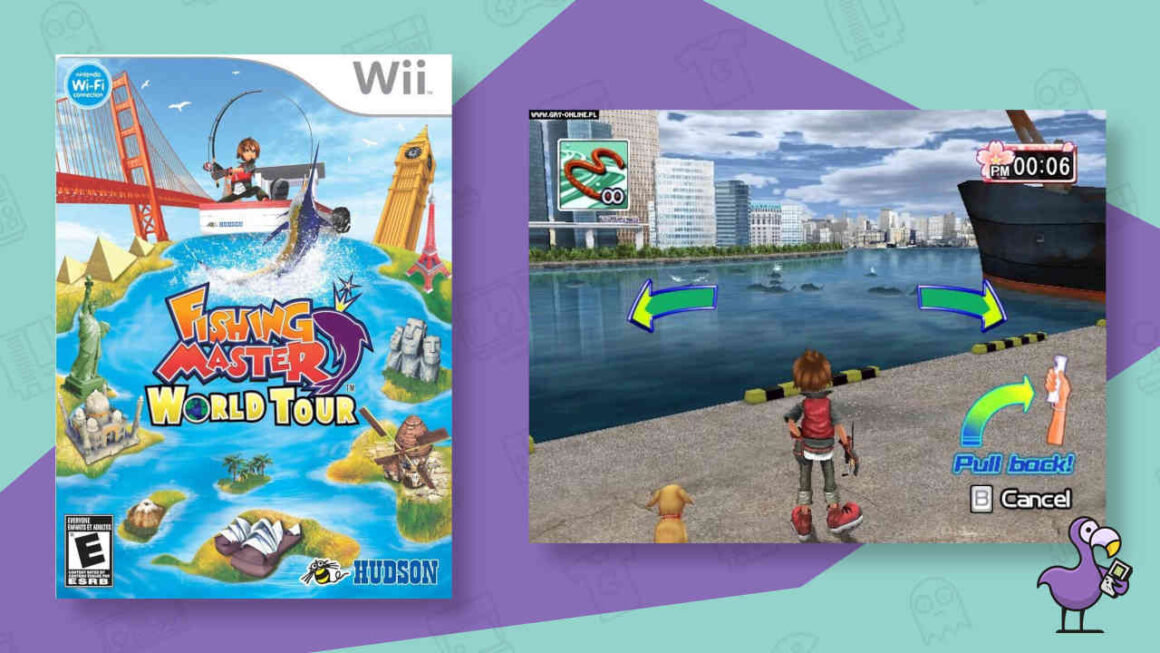 Hudson Soft have a long history of excellent video games – Bomberman and Adventure Island being just a few examples of their oldest and most well known titles. So, it’s perhaps no surprise to see one of their games on the best Wii fishing games list.

It’s another arcade-style game that’s designed for accessibility and fun, rather than simulation. Packed full of quests, the game boasts lots of fish to catch and even boss battles against particularly tough aquatic creatures!

The controls are easy to grasp and nicely implemented. Plus, the visuals are appealing and colourful too.

You can even choose an animal companion – a dog or cat – to accompany you on your fishing trips.

It even has a somewhat educational element despite the cartoony aesthetic; when you catch a fish, real world facts on it are added to the in-game journal.

Fishing Master World Tour definitely has that Hudson Soft magic and more than deserves its spot on the best Wii fishing games list! 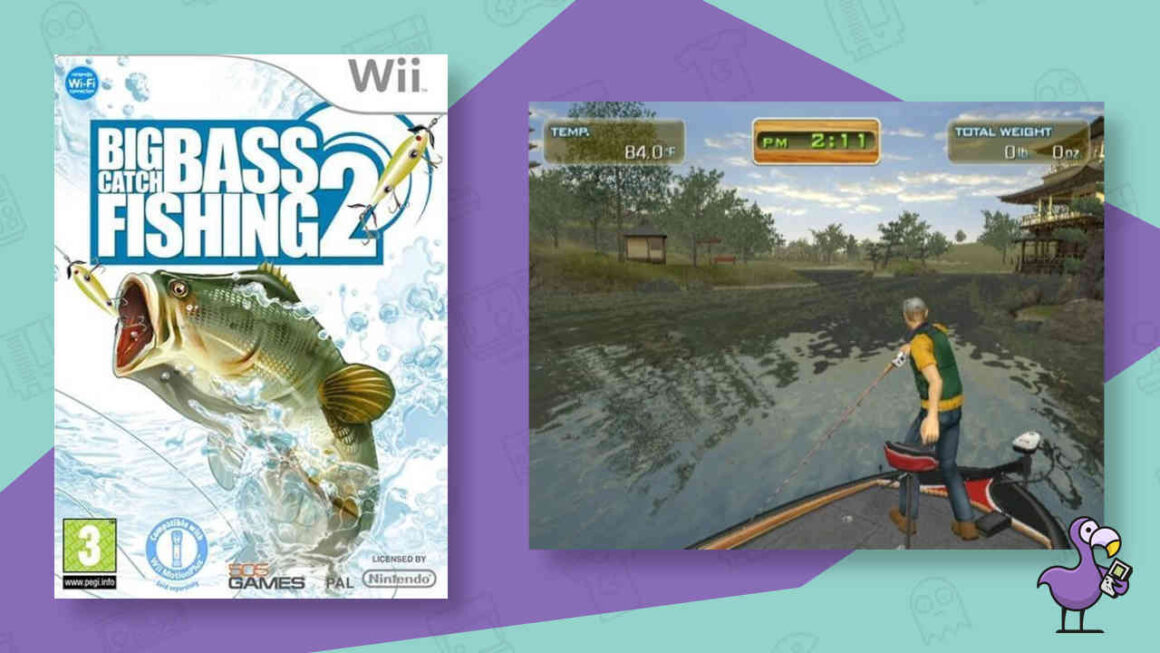 Also known as ‘Hooked! Again: Real Motion Fishing’, Big Catch Bass Fishing 2 is almost the only full fishing game on Wii to make use of Motion Plus.

This is surprising, because Wii Motion Plus added 1:1 movement to the Wii Remote, giving a huge degree of accuracy with the controller. So using it in fishing games seems like a no-brainer.

For whatever reason, it was incredibly rarely utilised, however.

Big Catch Bass Fishing 2 is another fishing game that leans towards simulation, which you’d probably expect given its Motion Plus support.

It was also another game which could be purchased with a fishing rod and reel attachment, in case the Motion Plus improvements to the game’s controls just weren’t quite real enough for you! 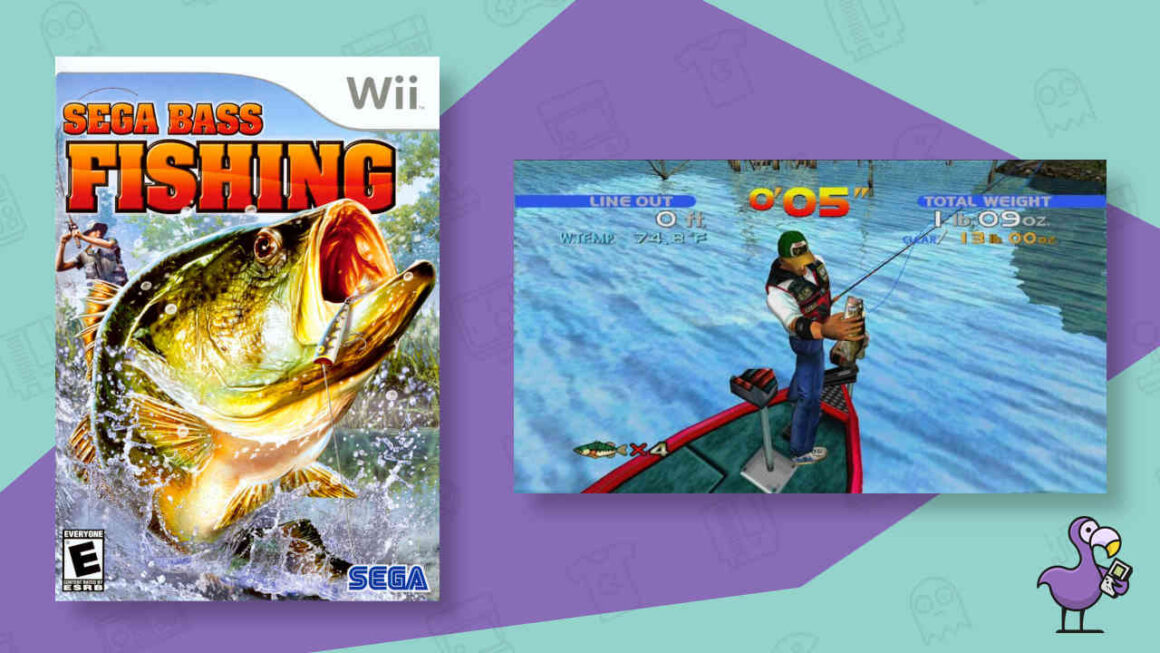 Originally an arcade game released in 1997, Sega Bass Fishing was first ported to Sega’s ill-fated but much-loved Dreamcast console back in 1999.

Sometimes known as Get Bass, it was accompanied by the brilliant Dreamcast Fishing Controller. It’s a fondly remembered, unique experience to this day.

This Wii version expands upon the original and includes content created specifically for this port, with four modes of play and seven entirely new stages.

Though it looks to be more of a simulation in a visual sense, the arcade heritage of Sega Bass Fishing is apparent in its accessibility and generally faster paced nature in comparison to other fishing titles.

It’s an excellent game and definitely deserves its spot in the top three of the best Wii fishing games! 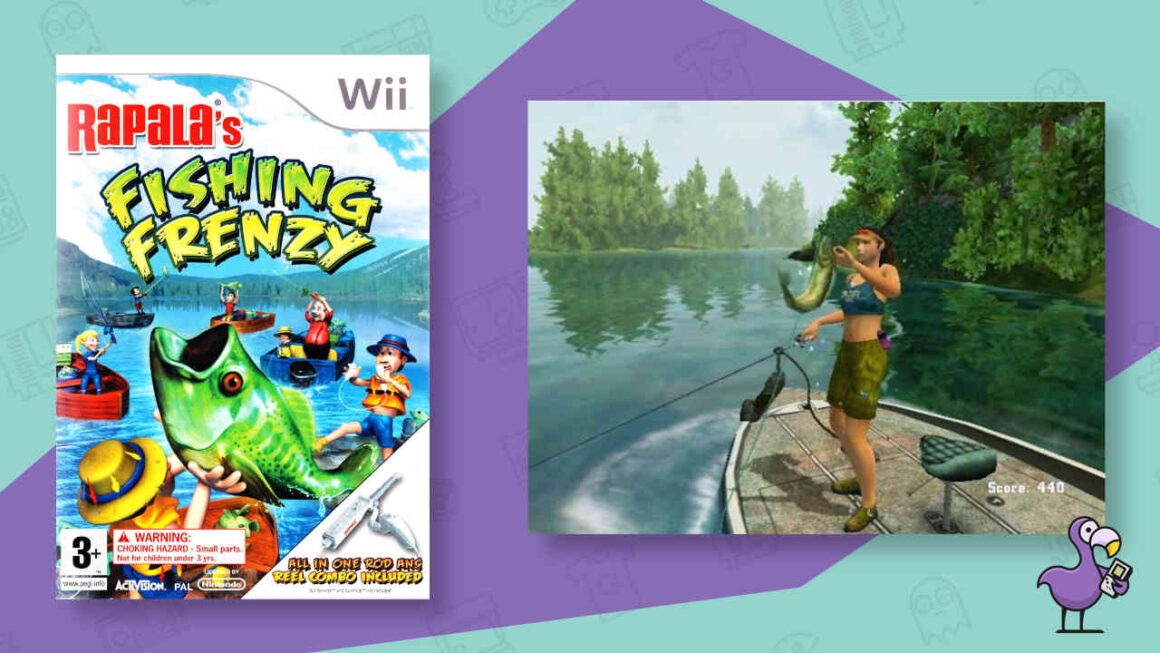 The third Rapala-branded game on the list (though there’s several more that didn’t quite make this top 10 – and you’ll even find one on our best PS4 fishing games list!) is also our choice for the best of the bunch – and very nearly the best Wii fishing game overall.

Though the controls have a bit of a steep learning curve in Rapala’s Fishing Frenzy, it’s worth persevering with.

That’s because the Wii remote controls are absolutely on point here. Though they take some getting used to due to their subtlety and complexity, they’re absolutely one of the strongest points of the game and genuinely make Rapala’s Fishing Frenzy one of the very best fishing games on the Wii.

Visually, however, it’s nothing to write home about. And it’s odd that the cartoony style on the box is completely different to the more serious and grounded in-game visuals.

But when the gameplay works so well, it’s something we here at Retro Dodo won’t penalise a game for.

In case you needed another fishing rod and reel attachment for your Wiimote and nunchuck, Rapala’s Fishing Frenzy would have had you covered in that respect too as it came bundled with one. 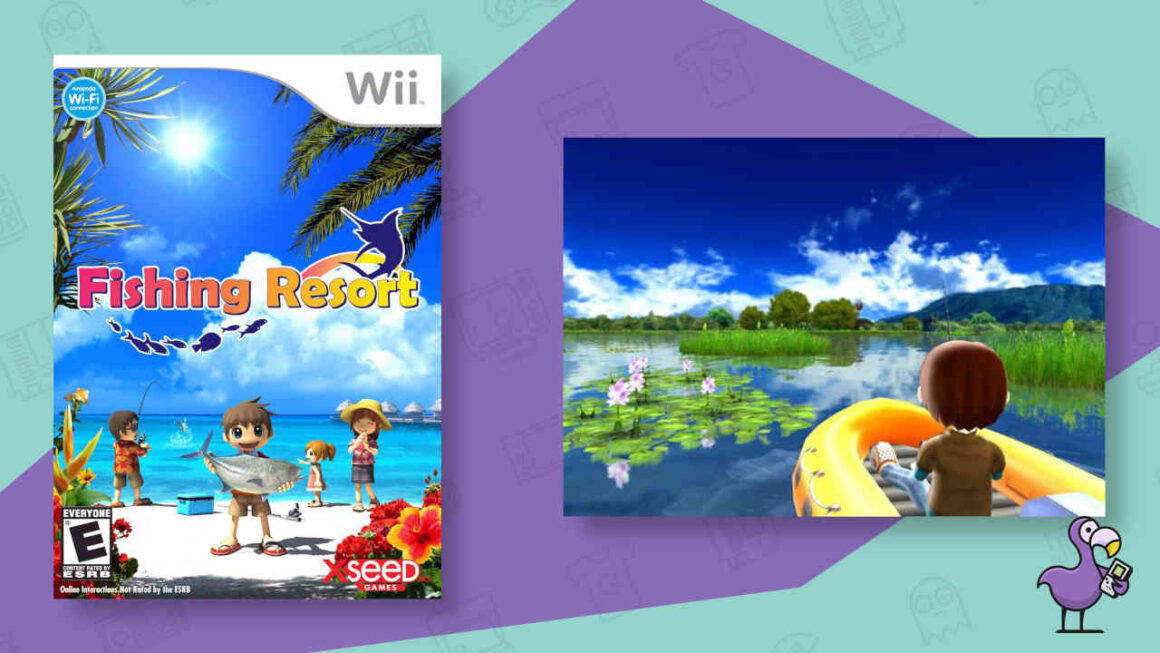 Developed by a team headed up by none other than Sonic the Hedgehog creator Yuji Naka, Fishing Resort sadly never saw a release in PAL regions.

Which is a crying shame, because this Motion Plus title (the only other fishing game that supports the improved Wii Remote) is genuinely excellent.

Fishing Resort sees players arrive at an idyllic island on their vacation, and they’re free to fish from wherever they choose.

This means that they can explore the mountains and go ice fishing or seek out tropical fish in the ocean around the island amongst many other locations that are available.

There’s an amazing 200+ fish to collect and more than 20 mini-games – for up to four players – to compete in.

Though it’s somewhat difficult to get hold of these days, Fishing Resort is well worth tracking down if you have an NTSC-capable Wii console.