If you want to race karts instead or raising invoices, then check out the best GBA emulators for PC right here!

Let’s face it; we can’t exactly be pulling a Gameboy Advance out in the office without attracting some suspicion now, can we?

And just how much is a Gameboy Advance worth these days anyway? It’s not like we’re in the middle of a cost of living crisis or anything!

Once again, Retro Dodo has you covered.

Play all your favourite GBA titles on the big screen at home, on the train, or at work while Debbie is chatting on about last years figures for the fourth day running.

Do us a favour, Debbie, take a break and play some Minish Cap!

So, get ready to check out the best GBA emulators for PC on the internet, and say goodbye to those Monday morning blues!

I’m just going to go ahead and say it; RetroArch is my all-time favourite emulator. It’s just one of the most easy-to-use programs out there and one of the smartest emulators available.

Ok, as I’m primarily a Mac user, I also love OpenEmu, but we’re talking about Windows today, so I’ll keep that to myself.

Retro Dodo readers will know all too well that RetroArch crops in every one of these lists. It’s just so versatile and does that crazy Hogwarts wizardry with the cores.

That’s right; RetroArch uses cores to emulate multiple different consoles. You can pretty much play any console that has ever been through this emulator so long as you have a reliable core.

Essentially, it’s an emulator of emulators.

Which makes RetroArch the champion of champions!

If you want to play GBA games on PC (which is why you’re here), then the GBSP and mGBA cores are the best for RetroArch. They provide stable gameplay and a large list of compatible games for you to get stuck into! 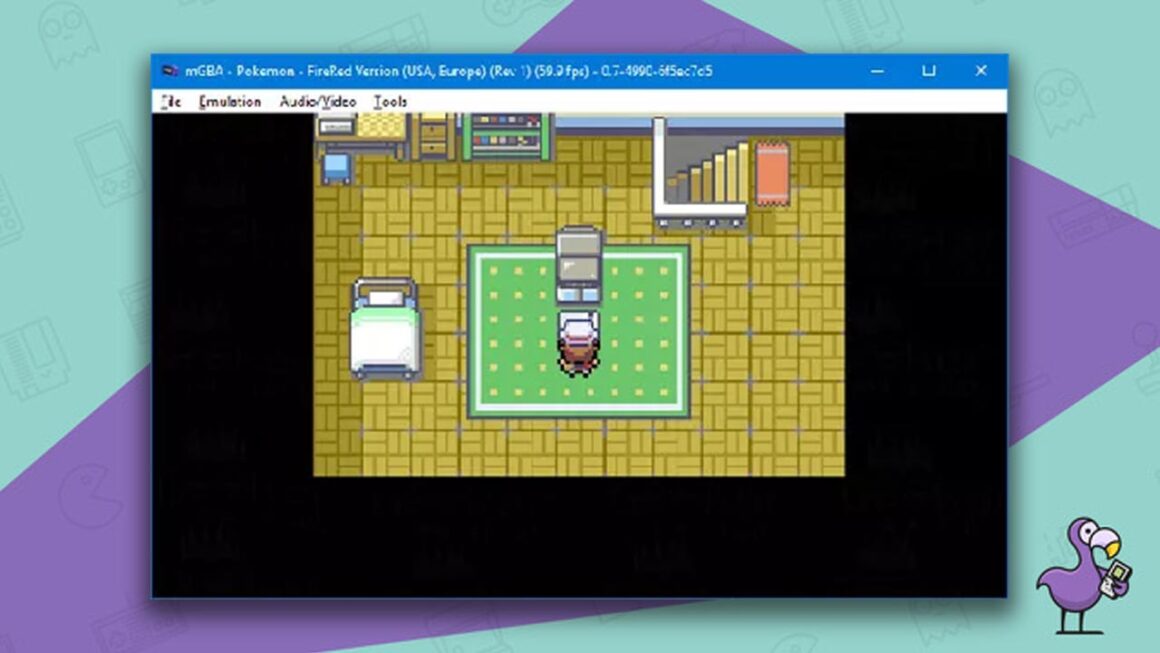 Remember mGBA from about 3 seconds ago? Well, the stand alone emulator takes the 2nd spot in this list of the best GBA emulators for PC!

mGBA works perfectly on windows, but it can also be found on Android smartphones and Macs too!

It’s definitely another stable emulation choice and one that you’ll also find on Windows-based handheld gaming consoles too.

With save states, the ability to add cheats to your favourite games, and an interface that is simple to navigate, it’s a solid choice for anyone solely wanting GBA emulation.

Unlike some emulators out there, mGBA receives regular entries on its website and has recently been updated (October 2022).

And, the source code is available if you want to have a play around and make your own emulator too!

Ah, VisualBoy Advance, one of the stalwart emulators that we’ve turned to time and time again over the years.

This is one of the oldest GBA emulators for PC, but with age comes experience and wisdom.

There are tonnes of games that work like a dream on this emulator. Whether loading up Pokemon FireRed or Kao the Kangaroo, there’s so many chances to play the best Gameboy Advance games on here that you certainly won’t find time to be bored.

VisualBoy Advance is written in C and C++ for any coding aficionados out there. It comes with external joystick compatibility, emulation for the Gameboy Printer, and the ability to record some of your best gaming moments!

No$GBA might sound like a company that is trying to sell you something from the spam folder of your inbox, but it’s actually the 4th entry in our list of the best GBA emulators for PC!

You know what, it’s actually one of the most highly regarded emulators on the internet today too. It boast a huge ROM compatibility list and lets anyone play fantastic titles from yesteryear.

It even has a bash at playing some of the best Nintendo DS games, though the compatibility list is much smaller than the GBA list, which is practically every Gameboy Advance title ever!

Play multiplayer with friends and save your progress as you play. There’s even scope to set up another controller so you can play with your favourite remote too.

As the name suggests, this emulator is there for people with zero funds, the ones with no cash available to buy old GBA games. That being said, it does have paid upgrades if you want to enhance your experience. 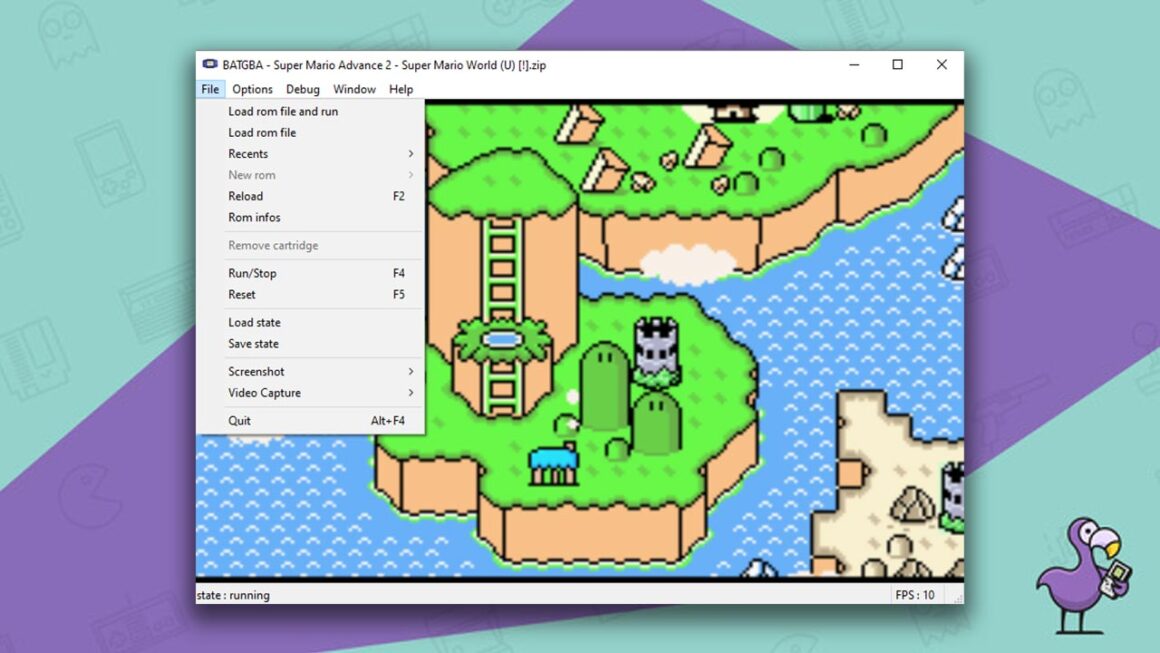 The final entry in our best GBA emulators for PC article is BatGBA, an old-school emulator that does exactly what it says on the tin.

Ok, there is no tin, but you know what I mean.

This is a very simple, stripped back emulator without any bells and whistles. It’ll run your GBA games perfectly as well as any DMG and GBC titles you have.

Still, it’s an old program and hasn’t been updated for many years.

That means that while it works smoothly and is simple to set up, it looks a little outdated. And, you’ll need the original BIOS files for your games too.

So, if all you want is an emulator without any special features and one that has a high compatibility rate, even though it looks a little ancient, then BatGBA will suit you just fine.

So many people ask us this question, which is why we tackled the question of ‘Are Emulators Legal‘ in a whole separate article! Take a look once you’ve finished here.

Why Should I Download The Best GBA Emulators For PC?

Downloading the best GBA emulators for PC lets you play Pokemon, Mario Kart Advance and many more titles from your computer when you should be doing work.

Hey, don’t blame me for helping you to procrastinate… that’s what I get paid to do!

Some emulators such as Visualboy Advance offer features such as screen recording that the GBA just never had too.

And, these emulators provide a chance to see your favourite games with updated graphics. That’s not a bad result, right?

What Are The Downsides To Emulating Games?

Nintendo aren’t too keen on the downloading and sharing of ROM Files.

Ok, when I say ‘not too keen’, they’d rather send Bowser round to your house with Kamek to mess you up good and proper.

Some emulators are pretty nasty too and don’t do a good job of emulating your favourite titles. That’s why this list only has 5 of the best instead of showing 15 mediocre programs.

Use the ones we’ve suggested to avoid nasty lag and save state loss issues.

Heck, if PCs can successfully run the best Nintendo Switch emulator programs in 2022, then they should be able to cope with GBA games just fine!

Hang on… who’s that walking up the garden path. Oh no, it’s Bowser. He’s flattening the begonias, and Kamek is trying to get in through the window.

It’s been fun, guys, but I think my time is up. MAMMA MIA!

The post 5 Best GBA Emulators For PC Of 2022 appeared first on Retro Dodo.