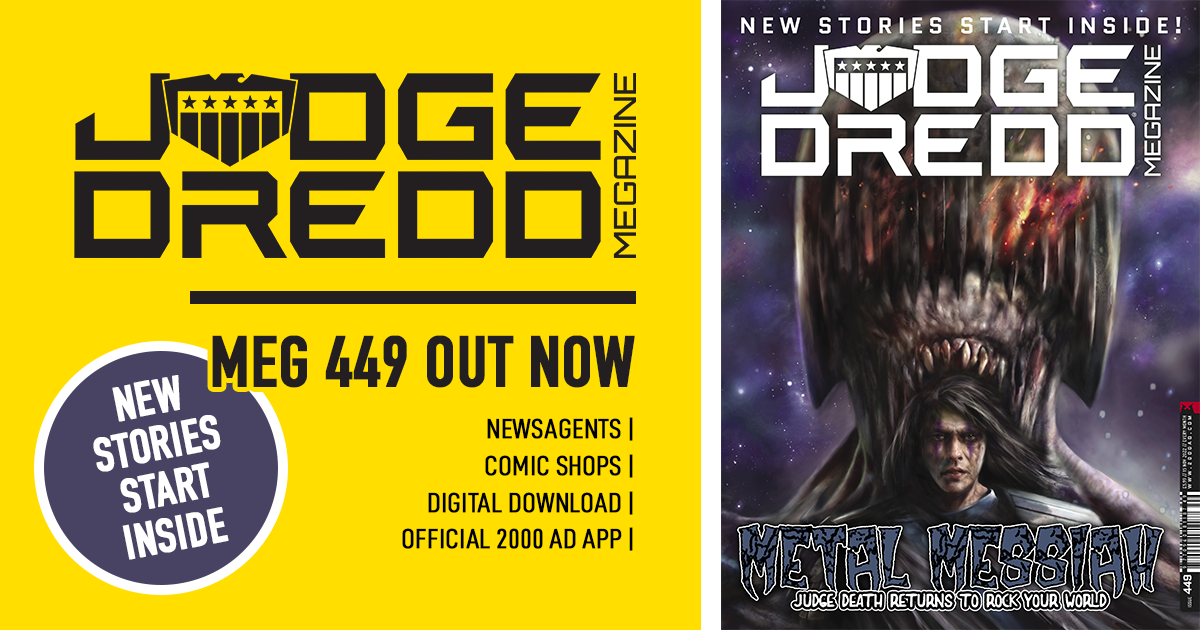 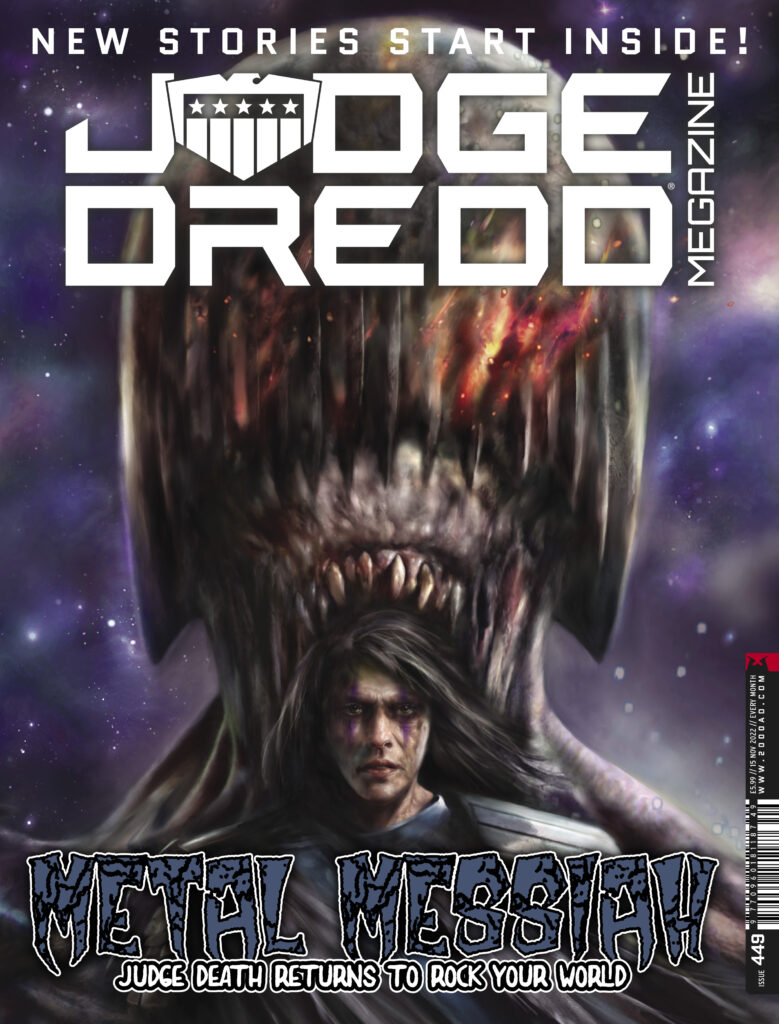 Judge Dredd Megazine #449 is OUT NOW, with a brand new line-up of stories that’s an ideal place to start reading!

We’ve got a stunning roster of strips commencing this issue – original undead menace and cover star Judge Death is back in Death Metal Planet by David Hine and Nick Percival; John Wagner and Colin MacNeil take to the skies once more in the second series of Surfer; Devlin Waugh is back, courtesy of Aleš Kot and Rob Richardson, picking up from the end of last year’s The Reckoning; and Judge Dredd tackles anti-xeno activists in the Cursed Earth in Babel by Ian Edginton and D’Israeli.

Add to that chats with artist Chris Burnham, director Ben Wheatley and artist Joe Currie about their new graphic novel Kosmik Musik, Si Spurrier and Charlie Adlard on new horror title Damn Them All, and the creators behind DC’s Legends of the Law, the short-lived Dredd title from 1995 that’s recently got a trade collection, and it’s another packed Megazine. Enjoy, citizens!

Judge Dredd Megazine #449 is out now from all good newsagents and comic book stores, plus digitally from our webshop and apps! Don’t forget that if you buy an issue of the Megazine in the first month of its release then postage in the UK is free! 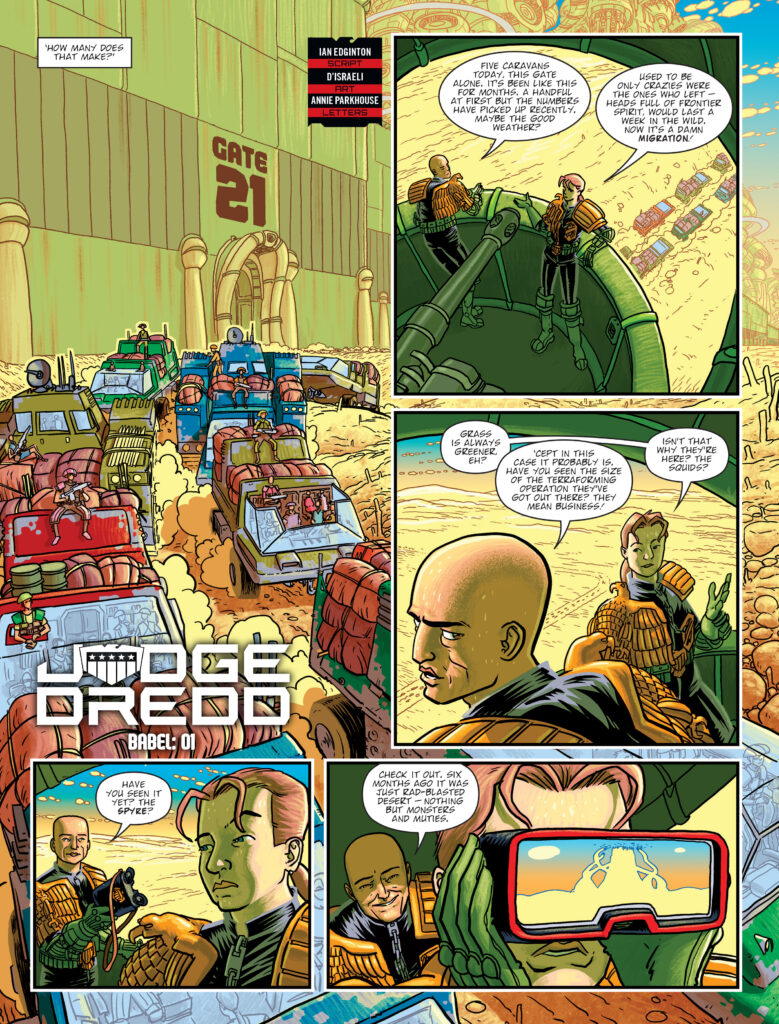 Mega-City One, 2144 AD. This vast urban hell on the east coast of post-apocalyptic North America is home to over 180 million citizens. To the west is the irradiated Cursed Earth, to the east the toxic Black Atlantic. Unemployment in the metropolis is at ninety per cent, boredom is universal, and crime is rampant. Stemming the tide of chaos are the Judges, future law-enforcers empowered to dispense instant justice. Toughest of them all is Judge Dredd – he is the Law! 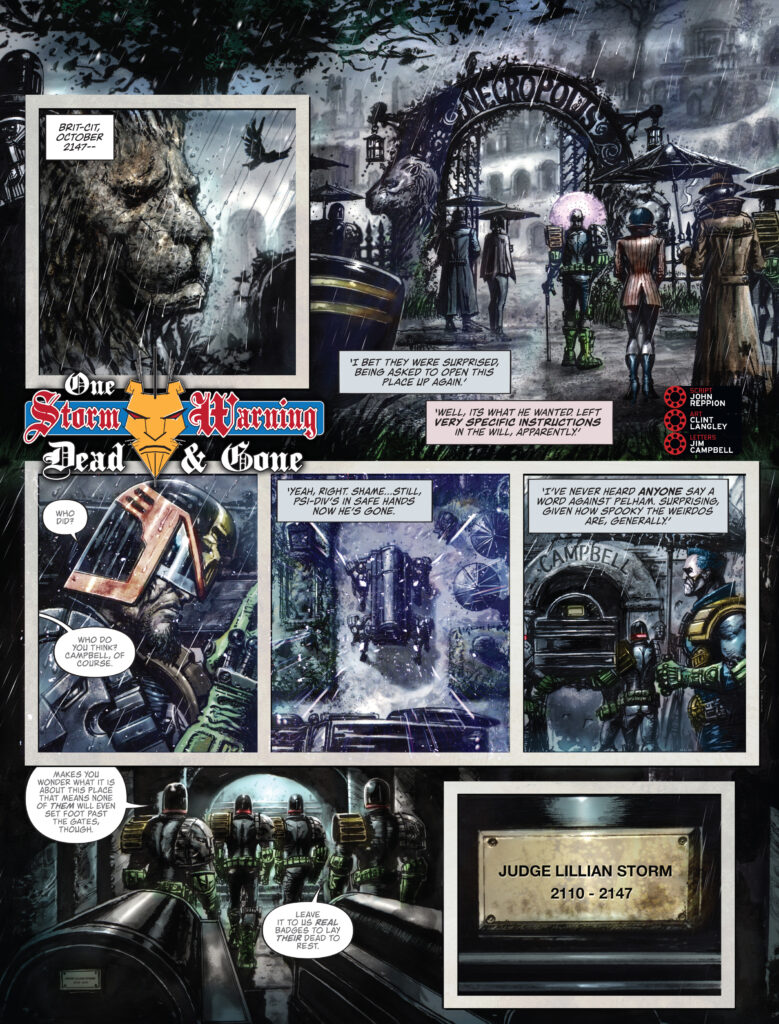 Brit-Cit, 2147 AD. Much like its Mega-City counterpart, Brit-Cit Justice Department has its various divisions, from Tek to plainclothes, Tactical to Psi, and one of its more prickly operatives in the latter is Lillian Storm, who has the ability to talk to the dead, and is always accompanied by her ghostly helpers, the spirits of children that have been with her since a demonic ritual… 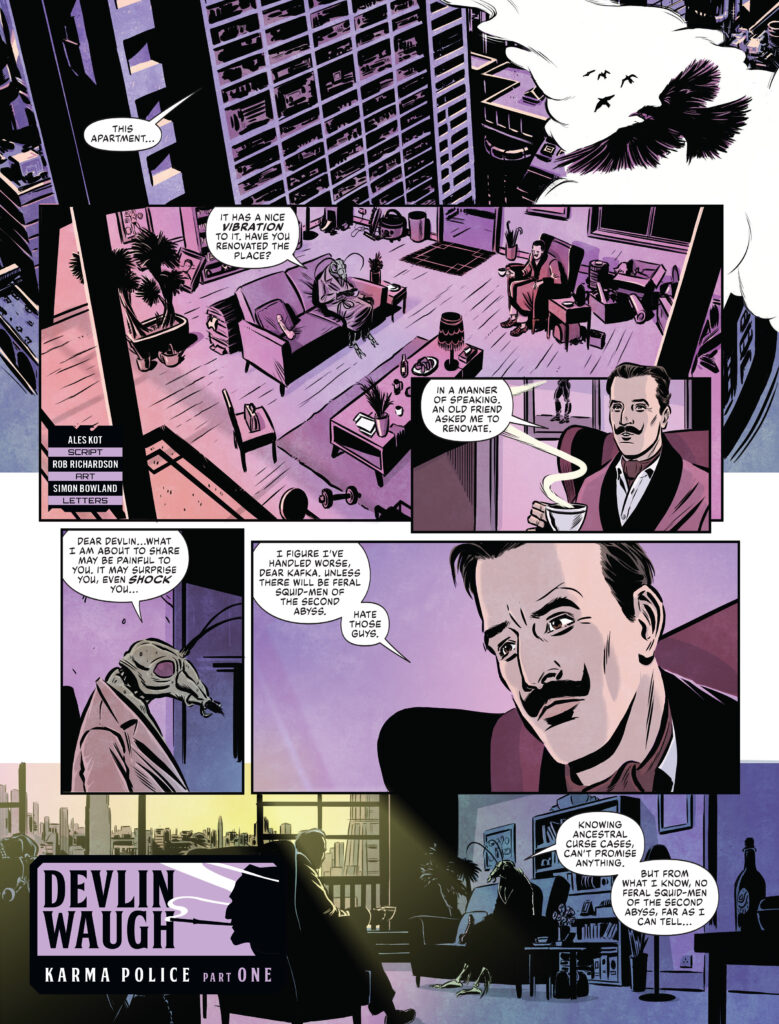 Brit-Cit, 2144 AD. A freelance paranormal troubleshooter and exorcist for the Vatican, Devlin Waugh is the world’s foremost supernatural investigator. Despite becoming a vampire after getting bitten tackling an outbreak in an underwater prison, Devlin continues to enjoy the finer things in life. Now, after a trip to Hell, he must investigate the curse on his bloodline… 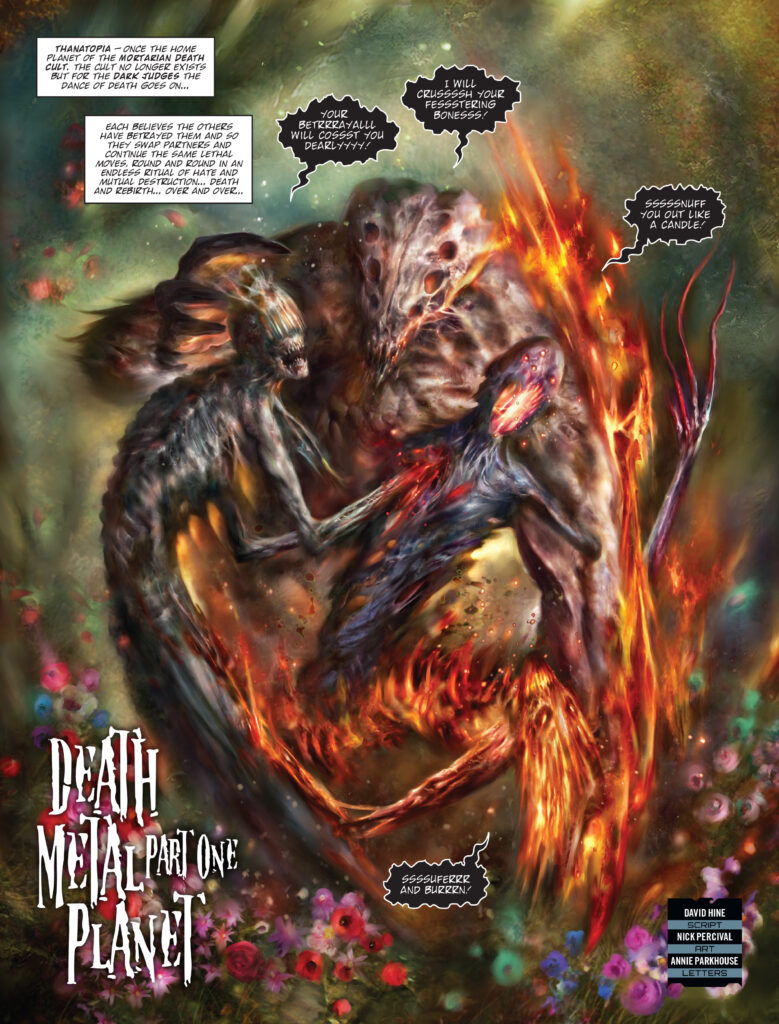 After the events on the Mayflower, in which the Dark Judges were ejected into space, they ended up on the colony world of Dominion, which they proceeded to decimate. When Mega- City marines were sent in, assisted by survivor Rosco, the planet was destroyed. Then they were taken to Thanatopia, home to death cult, where they were worshipped like gods… 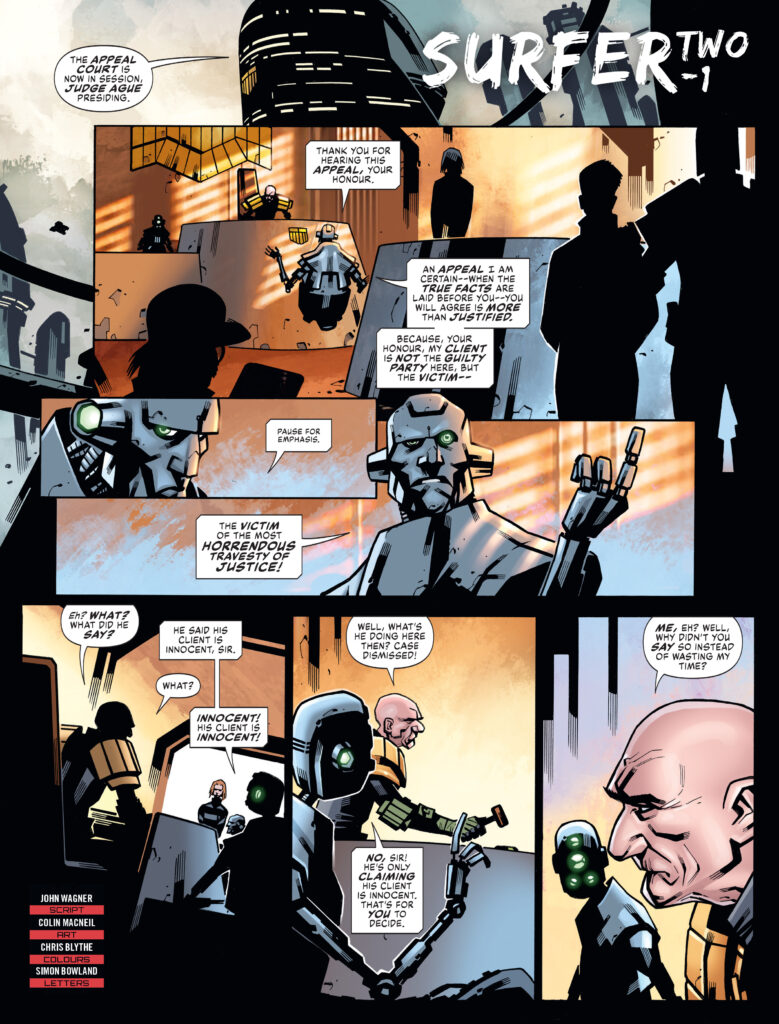 Mega-City One, 2144 AD. Skysurfing is one of the most popular pastimes in the twenty-second century metropolis, a sport that requires a great deal of skill and agility. Young Zane Perks is a particularly gifted surfer, and won a place to be in a movie recreating the famous Supersurf 7. But the film was a scam, and the surfers either died or were arrested. Zane is facing cube-time… 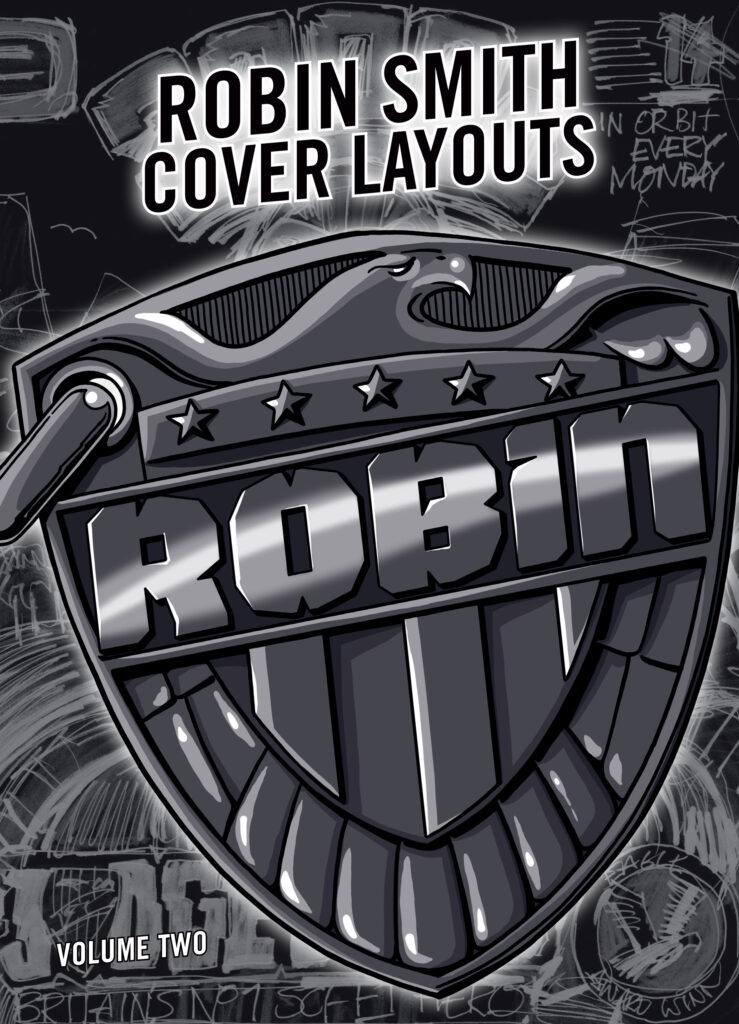