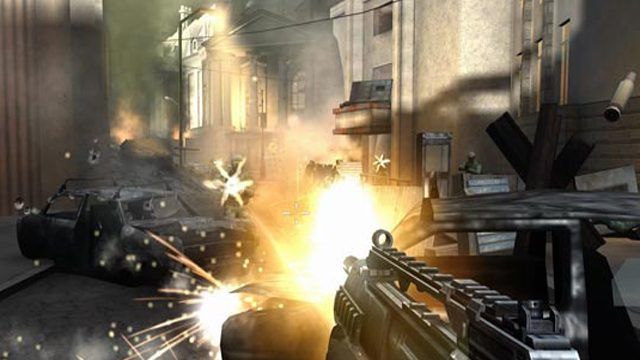 Criterion's Black is a product of its time: which is to say that, if you were there, it's simply one of the best shooter experiences there was. I say 'experience' because that's what Black felt like: a game that almost blew back the wallpaper as your ludicrously boombastic weapons chewed through enemies and scenery alike on the CRT. The studio, then and now known best for the Burnout series, had managed to pivot into the FPS genre and make an insta-classic.

Which is why it's a source of some disappointment, even now, that Black was it. Criterion never went on to make another shooter. Key talent involved in Black left Criterion: the lead programmer was some bloke called Sean Murray (yes that one), while co-creator Stuart Black (really) went on to Codemasters and the disappointing Bodycount. Perhaps more importantly, while some of Black's creators could see a future for the game (and it sold well enough to justify one), ultimately neither Criterion or EA did.

Several figures involved in Black recently spoke to ThatHitbox for a retrospective on the game, which is well worth a read (if, like me, you miss shotguns that sound like backfiring trucks). Criterion figures have in the past mentioned a mooted sequel to Black, but here we finally get a firmer idea of what it looked like, and where the team intended to take the series.

Richard Bunn, a senior game designer on Black, had moved on to what would become Burnout Paradise. "But I kept sneaking in to the Black office afterwards, " recalls Bunn. "I was still friends with Craig Sullivan [lead designer on Black 2]. There were a few things that they did. They wanted to continue to be influenced by movies. They employed a model builder to build miniatures of lifelike locations. They could then be used as reference material or as inspiration for design."

One of the sequel's big ideas was to move towards more 'realistic' scenarios, inspired by IO's Hitman concept of a player moving through populated levels to take out a target. A pre-visualisation scene was filmed outside Criterion's office where a developer wore a chest camera while wielding a replica gun in an imagined cafe scene, intended to showcase Sullivan's elevator pitch for a new type of aiming system: "eyes not head."

Bunn explains: "In most first person shooters, you use the stick to look around. Your gun and head are glued together. The idea was that you could look independently of your gun somehow. Criterion’s always looking for an angle. What words / terms can be used to describe it? What’s the hook?"

Then Bunn goes on to describe the only part of the unmade sequel that he ever got to play, and it's enough to make your innie Arnie weep. It's a scene set in Korea, presumably North Korea, on top of an ICBM launch silo.

"You’re trying to stop them from launching, but in a 'fail to do so' type scenario. You’re in a big open area, with great big concrete blocks as cover objects. There’s enemies coming in”.

“While you’re fighting, other vents start opening up and the whole area gets filled with smoke and gas from the rocket launch causing loss of visibility," says Bunn. "It’s getting closer and closer to launch, and the whole environment gradually reflected that. Eventually it opens and this great big missile launches out the middle. It was all about the evolution of the gameplay environment.”

Why did this not get made! Get me Larry Probst on the phone this instant!

Other aspects of the sequel mentioned by Bunn were the ambition for it to be co-op, including revive and 'dragging' mechanics for players to help each other. Black sound designer Ben Minto adds the detail that the game's proposed subtitle was going to be Rendition, as in the practice of extraordinary rendition.

"The idea centred on American troops going overseas, kidnapping people and bringing them back across borders," says Minto. "The subtitle 'Rendition' was sort of tying in to that. I’m not sure that there was a fully-fledged story mapped out though. For me, it was just weird that a car studio made a gun game, and then never made another one."

I know, right? Black was an extraordinary achievement for Criterion, and it's a bit of a tragedy for fans of virtual gunplay that its concepts only ever had the one airing. You see parts of the game in all sorts of modern shooters, but few have ever had the sheer bang-for-your-buck excess of this.