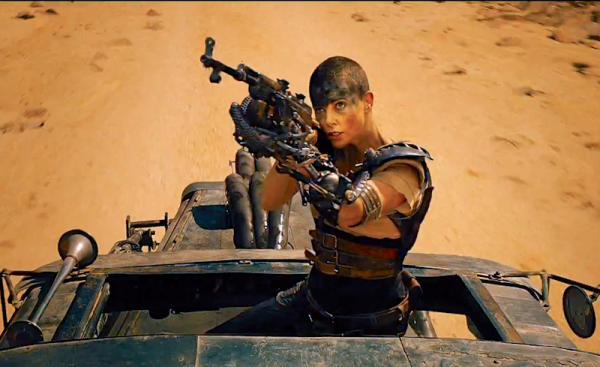 In a few years, we'll be treated to Mad Max: Furiosa, the long-awaited but unexpected follow-up to 2015's Mad Max: Fury Road. The prequel film will follow the origin story of Imperator Furiosa, who will be brought to life by The Queen's Gambit and The Menu's Anya Taylor-Joy. While we're still a long ways away from seeing Taylor-Joy in the role, the actress' work on the film has already made headlines -- and it looks like she's confirming one consistently-reported fact. During a recent appearance on The Graham Norton Show, Taylor-Joy was shown a clip she posted on her Instagram account during production on Furiosa, which shows her performing an impressive handbrake return. As Taylor-Joy confirmed, that was her first instance of actually driving a car, and she actually still does not have her driver's license.

"What's really crazy and slightly upsetting about that is that that's my first time in a car," Taylor-Joy said after Norton rolled the clip. "So I don't have a license, I can't parallel-park, I can't go on the highway. I still don't have one, but I can do that. At some point that will come in handy, I'm assuming."

What is Mad Max: Furiosa about?

In Mad Max: Furiosa, as the world fell, young Furiosa is snatched from the Green Place of Many Mothers and falls into the hands of a great Biker Horde led by the Warlord Dementus. Sweeping through the Wasteland they come across the Citadel presided over by The Immortan Joe. While the two Tyrants war for dominance, Furiosa must survive many trials as she puts together the means to find her way home.

The film will be written and directed by George Miller, and will also star Chris Hemsworth as Dementus.

Why is there a Mad Max prequel?

As Miller revealed in an interview earlier this summer, the very ethos of Furiosa came about while he was writing Fury Road, and began to realize that fans might take an interest in hearing the character's origin story.

"When we wrote Mad Max, the task was to tell a story that was always on the run and to see how much the audience could pick up in passing," Miller explained to The AV Club. "That was one of the tricks of Mad Max: Fury Road, that there would be references to things of where she's from, why they're doing things, but it was always on the run. There were very few moments of quiet. We never explained how she lost her arm. We never explain what the actual Green Place Of Many Mothers was. We never explained the workings of the Citadel. So we had the screenplay virtually complete before we shot Fury Road, and we did it because it arose out of wanting to explain to everybody who Furiosa was--to Charlize when she took on the role, and to all the actors and the designers and everybody else working on the Citadel and so on. The feeling was, gee, this is a pretty good screenplay, and then I kept saying to myself, 'if Fury Road works, I'd really like to tell this story.'"

"So it came about, I'm not going to say accidentally, but it came out of a need to explain [Fury Road's] world which, as I said, essentially happened over three days and two nights," Miller continued. "It's really trying to explain how that world came to be. We also wrote, not a screenplay, but almost in novel form, Nico Lathouris and I, what happened to Max in that year before, and that's something that we'll look at further down the track later. But in telling each other the story of Furiosa, everything in Fury Road had to be explained. In my mind, I have a back story of the Doof Warrior, who plays the guitar. How could a blind man who all he can do is play a guitar, how does he get to survive in a wasteland where everybody is in extremis? How did he come to be there? So we wrote little stories for every character when we made Fury Road."

Are you excited for Mad Max: Furiosa? Share your thoughts with us in the comments below!