The crossover between Project Zero II: Crimson Butterfly, the well-known survival horror video game, and Identity V, NetEase‘s first 1 vs. 4 asymmetric competitive mobile game are now available. A young girl enters the manor and faces another round of being pursued and escaping as the abandoned ancient hamlet resonates with the screaming shouts of the haunting ghosts.

The second installment of the Project Zero series, Project Zero II: Crimson Butterfly, is recognized as one of the most terrifying video games ever made. Mio and Mayu are twin sisters who by mistake entered Minakami Community, a vanished village. They strive to flee as they investigate the location amid various forms of spirituality and dread. They gradually learn about the catastrophes that have occurred there.

The twins Mio and Mayu Amakura will work with other survivors and hunters in the crossover event of Identity V and Project Zero II: Crimson Butterfly to address a new issue at the Oletus Manor. The terror is everywhere, and the night goes on forever.

The twins’ younger sister, Mio, is vivacious and upbeat. Because of her error, her older sister Mayu suffered an injury to her right foot. Mio thus pledged that they would remain together forever. Mio, worried about her older sister, follows Mayu as she chases a mysterious red butterfly deep into the woods. They soon find the mystery settlement.

One of the final twins to carry out the Crimson Sacrifice Ritual is Sae Kurosawa. She was caught while trying to flee with her sister after falling off a cliff. So she had to perform the ritual by herself out of spite for her older sister. She returned as a haunting ghost after the ritual went wrong, waiting to reunite with her sister and fulfill their wish to spend the rest of their lives together. 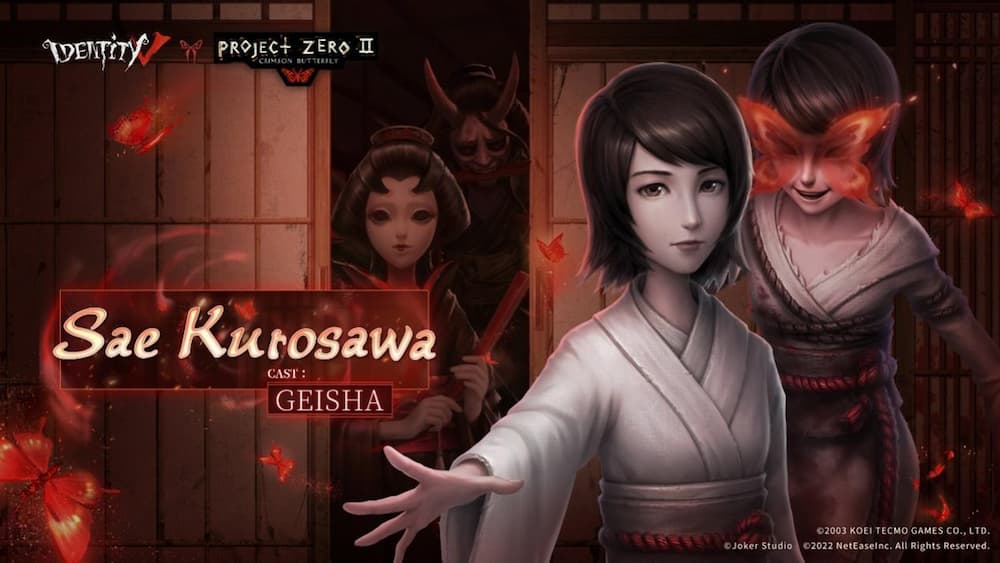 Players can check out the crossover between Identity V and Project Zero II: Crimson Butterfly from November 24 to December 23. For a brief period, the gift set [Mio Amakura] will be available in the store. It consists of [A-Costume] Perfumer—Mio Amakura; [A- Accessory] Perfumer – Memo allows you to reenact the girl who used a camera to look for the truth in the manor, and [A-Costume] Geisha – Sae Kurosawa will also be released to transport you back to those horrifying and heartwarming moments.

There will be activities that have a set time limit during the crossover. Players can obtain [Portrait] Mio Amakura, [Portrait] Sae Kurosaw, [Portrait Frame] Project Zero, and more by snapping pictures, logging in, and completing missions! Players can also access the handbook editing feature as the event goes on, allowing them to arrange their photos and go back in time.