But what does that mean exactly?

The basic concept: The Portal is both an Android gaming console and a whole VR package.

You need to see the video that shows it in action to really understand what is going on.

The easiest way to explain it is it would be the most advanced Android device that can be used in a VR headset.

And it has detachable Nintendo Switch style controllers that have their own attachments for VR mode or handheld game mode.

So… this thing is a true Transformer.

Pimax advertises the device as a true all-in-one and multipurpose package.

Whether you’re interested in playing it in handheld gaming mode, docked gaming mode on your TV, using it for cloud/stream gaming, or as a VR headset… this thing has it all covered.

If you wanna check it out for yourself, go to their Pimax Portal Kickstarter page!

So what’s this Metaverse stuff about?

Well, it just seems like that is Pimax hoping to catch some of the hype of the Metaverse in the hopes of bringing attention to their product.

You can’t blame them for trying.

But really, the Metaverse stuff should be a small note on the page, not the main headline.

Yes, you could technically use this setup for playing around in the Metaverse. But it’s not a device made specifically for that purpose alone.

They really should be talking more about the gaming capabilities, because that will likely be where this thing draws the most attention.

But hey, it’s not our company.

What’s inside the Pimax Portal?

In order to make this device work well as a handheld gaming console AND the screen used in VR mode, it has to have a good screen. And good screen it has!

They are packing an 5.5 inch 4K Qled inside this Android device.

And that screen runs at 144Hz to ensure maximum clarity.

It also has a Snapdragon Qualcomm XR2 in it, which should provide some substantial power for allyour gaming needs, as well as the VR stuff.

They say it’s an 8.8 inch device, so with controllers, it should be just a bit bigger than a Nintendo Switch Lite. 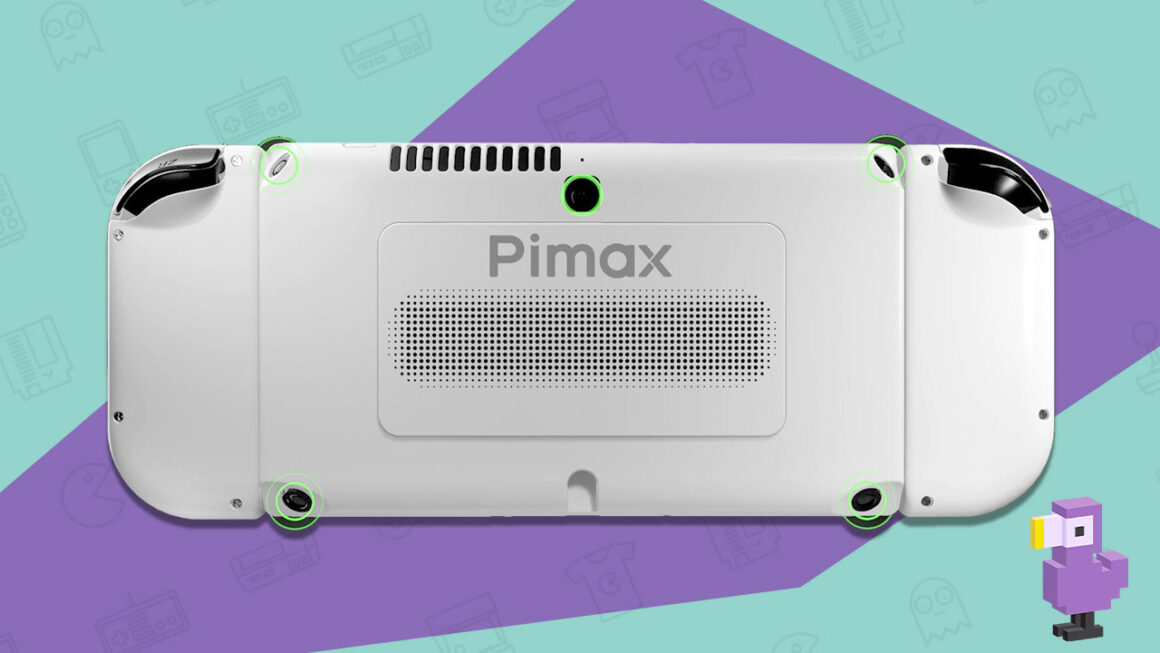 The makers of the Portal also advertise the most physical buttons on any mobile device, with the count at 32.

We can see 22 obvious ones at a quick glance. So I’m curious where they’ve managed to hide a bunch of ’em.

To fully appreciate the entirety of what the Pimax Portal is, you have to understand its many working parts.

This all gets a bit confusing, so strap yourself in! 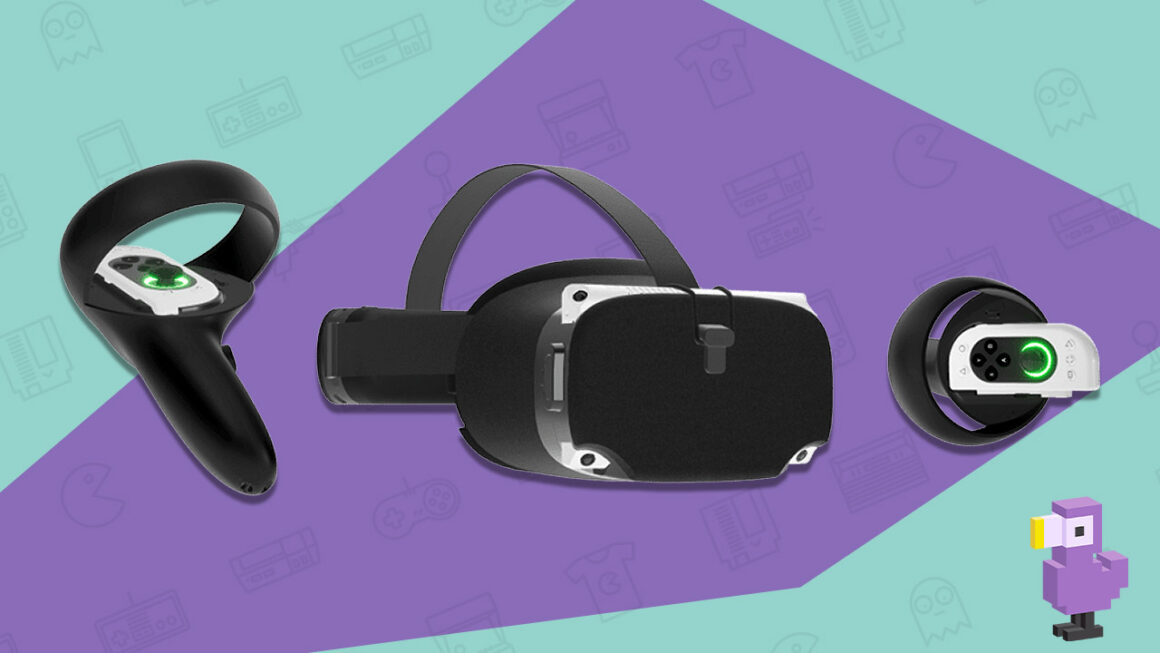 Like we said before, this thing is both a standalone gaming device as well as a full setup to make it a VR headset.

To hopefully make the whole setup as clear as possible, we will try to break it down:

This is the actual “Portal” device, which is an Android tablet with a Snapdragon Qualcomm XR2 and 5.5 inch screen.

This is your main gaming console when you attach the Switch style controllers and also is the main unit for VR that slides into the VR headset.

It has five built in cameras when using it for VR, and it can also track you when you have it docked in front of your television.

They advertise that you can use the device for virtual workouts using that option.

And you can also go handheld with the device and it can do augmented reality.

These are Nintendo Switch style detachable controllers that have a magnetic lock to keep them in place on the Android Device.

These double as your VR controllers as well. You remove them from the main device and put them inside the plastic hand accessories.

Presumably, they connect to the main device using bluetooth.

Yes, this device also comes with basically an external consolizer that helps boost its performance.

This station that they are calling an “offboard processor and operating system for Portal” is not the main OS for the device, it’s simply an external boost for streaming and additional processing when using the VR.

We may or may not be understanding that correctly.

This should be pretty self explanatory, but it’s a dock to connect the Portal to your television and use it as a gaming console on there.

The VR headset does not have any built in tech or screens. It is all based on sliding your main Portal console into the headset.

The VR headset comes with changeable lenses to modify the viewing angles.

These are simply plastic holders for the Nintendo Switch style controllers to slip into and they become your VR controllers. 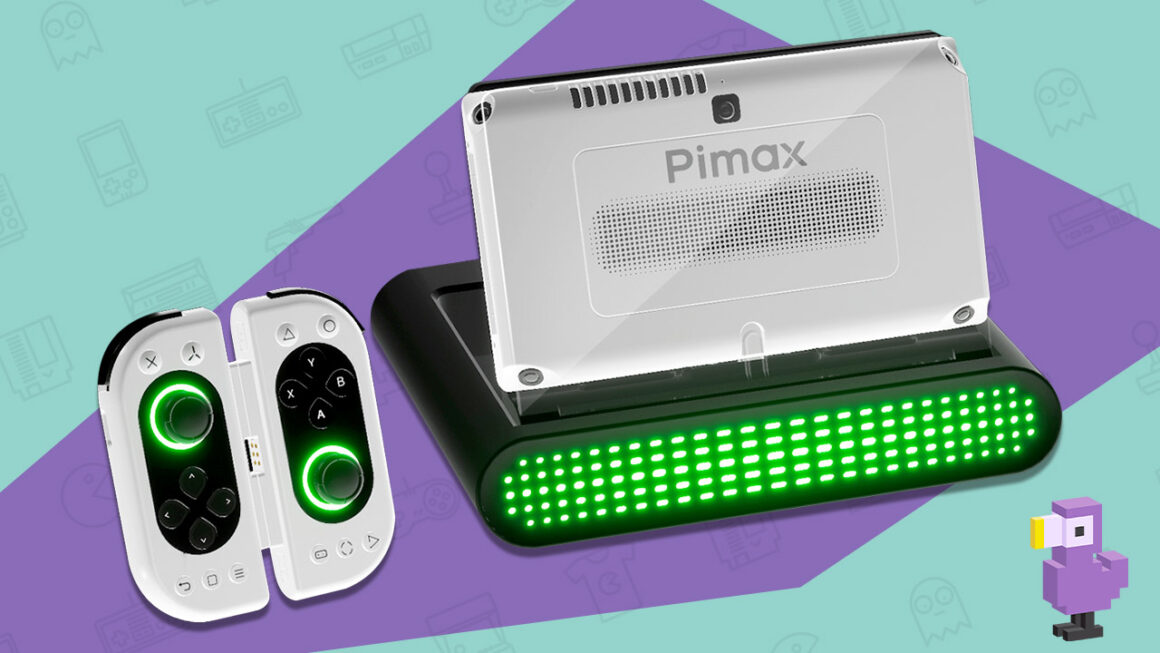 The specs of this device are a bit tricky to follow. But after a lot of digging around their Kickstarter page, this is what it is looking like:

You can get the base console by itself starting at $299. Which makes it relatively affordable in the Android gaming scene.

Keep in mind that this package does not come with the VR attachments.

The package that has all of the bits necessary to use this as a VR system starts at $449. Which also sounds quite affordable in the VR scene.

But keep in mind that this is not a legitimate VR system; it is an Android tablet that can be slipped into a custom VR headset.

Still the most premium version of that kind of setup, but also not a full dedicated VR headset.

These introductory packages also do not feature that QLED display they talk so much about.

For the package containing the QLED, you’re gonna have to back $549 for the console only version and $599 for the full VR setup.

Obviously, if you’re gonna back this thing, you might as well get the real deal: Go for the QLED and full VR suite.

That’s the whole point of it, right?

Overall, this is a pretty impressive looking package.

The Portal truly delivers a wild multipurpose setup that can be used in so many entertaining ways.

Handheld gaming, cloud gaming, docked gaming, VR. Plus you can just use it like a regular Android tablet.

It’s really got a little bit of everything.

It seems like a situation where we just have to trust in the process and know that we are getting a bunch of working pieces that we may not totally understand until we see it in action.

Which could be part of the fun of it.

Oh, and this ain’t even Pimax’s only VR package they are releasing.

They also have an ultra ultra premium Pimax Crystal that is coming in the future.

Needless to say, this will be something on our radar.

Hopefully Pimax can deliver on their promises of one of the most premium all-in-one gaming and VR setups money can buy.

Because if it’s all as they say… this could be something pretty incredible for the gaming scene!