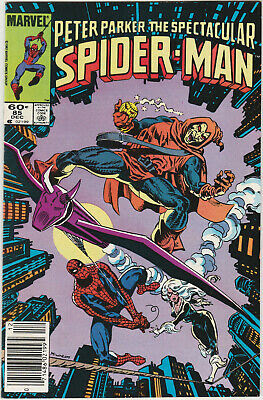 This was the B Spider-Man book at the time. Surprisingly enough, they really worked hard at making both books pretty much run concurrently. When The Black Cat was injured in Peter Parker, The Spectacular Spider-Man, Spider-Man visited her in the hospital in Spider-Man. And this issue picks up The Hobgoblin storyline from Spider-Man. You can tell this is the B book, though, because the writing and art aren't as good. Bill Mantlo wrote the issue with a plot assist by Roger Stern. Al Milgrom penciled it. We get a scene where Harry Osbourne and his wife announce that she's pregnant. We also get a dinner date with The Black Cat and Spider-Man which is hilarious because Parker sits down and eats without taking his costume and mask off. Then we get a battle on a rooftop between The Black Cat, Spider-Man, and The Hobgoblin. Before the big fight, The Hobgoblin jumps into a tank of chemicals to transform himself into a powerful, new version of The Green Goblin. The Hobgoblin loses and flies away after the battle. Parker would've captured him but The Black Cat got in the way. The one good thing about this issue is that there's a lot of meat to it. I've said this before, but it takes awhile to read these old issues because of all the words in them. These days, most books are pretty brief and can be read in a few minutes. At $3.99, most comics now feel like a rip off. Other than that, this isn't a great issue or anything, but definitely has that old school, classic, comic book feel. **1/2


* This article was originally published here