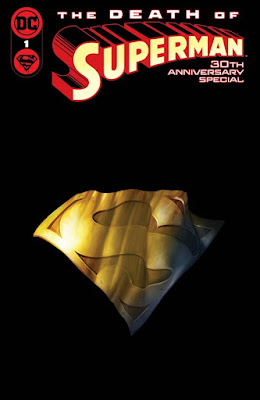 It is a wonderful book, bringing together the architects of that classic arc for several stories. The book is too big to cover all in one review so I'll be covering the first (and longest story) by writer/artist Dan Jurgens with inker Brett Breeding.

The story takes place in the recent past, recent enough that Jon is around but not recent enough for Jon to be aged. I am surprised that once more DC is giving us stories of a de-aged Jon. Perhaps they realize that a tween Jon still has story opportunities. Here Jon learns about how his father died at the hands of Doomsday. It is an excellent retelling of the classic story (it was 30 years ago, maybe people haven't read it before) while adding a new character.

But the joy here is the retelling of the story from Lois' perspective, teaching Jon about how deadly Doomsday was and how noble Superman was in sacrificing himself.

I grabbed the Franscesco Mattina cover because the punched out symbol cover is a nice riff on the similar covers introducing us to the four wannabe Supermen that emerged in The Reign of the Supermen arc.

On to the story. 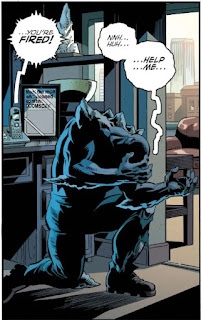 We start out in the apartment of someone named Crayton, clearly a construction worker who helped clean up after the Doomsday attack on Metropolis.

But Crayton is becoming a Doomsday-like creature, mutating in pain.

We have seen stories where people become infected with Doomsday genes before (Superman himself becoming a monster in Doomed). But this one eventually has a nice twist. 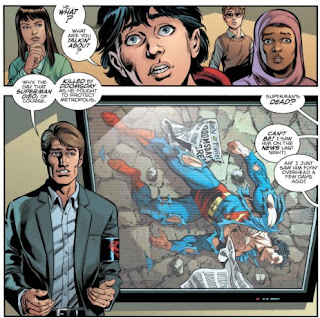 Meanwhile in school, Jon learns about the death of Superman at the hands of Doomsday.

In what will become a motif throughout the story, Jurgens and Breeding put in panels which are almost perfectly lifted from the original arc. Here we see the classic famous Jimmy Olsen photo of Superman's death. 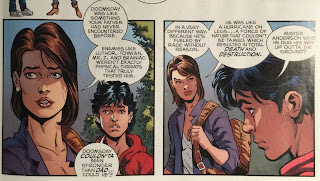 On the way home, Jon confronts his mother for hiding this story from him. I do find it a little interesting that Jon hasn't heard it before. Surely this is a story that gets revisited on the news now and then.

But his not knowing the story gives Lois (and our creators) the ability to have her retell it.

I like how even here, even talking about Doomsday, Lois looks concerned, as if the memory is shaking her.

She rattles off the names of other villains including 'Mr Z'. Do you think that was supposed to be Mr. Oz? That wouldn't make sense given the timing of this. 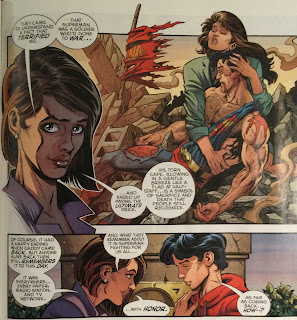 We get more retelling until Lois reaches the point where Superman is always fighting for us with honor.

But I like how Lois points out how the torn cape was a powerful symbol of Superman's sacrifice.

Really great stuff reminding us of the weight of that story and the iconic images that were born of it. But also what it meant about Superman, reminding everyone how he was a true hero. 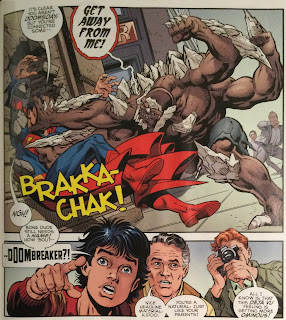 Meanwhile, Crayton's mutation continues unabated. And unlike the real Doomsday, he continues to change and gain abilities ... four arms, heat vision, even bat wings by the end. This is a truly evolving Doomsday.

And this time Jon is there to witness. He calls this new villain Doombreaker.

But remember, this is in the past. 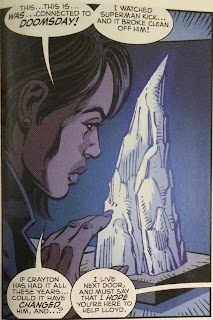 With Doombreaker screaming anti-Kryptonian threats, some bystanders say it sounds like Crayton. This leads Lois to do some investigation.

In Crayton's apartment she finds a spike of Doomsday with Superman broke off in the battle. That actually happened in the story so nice call back by Jurgens 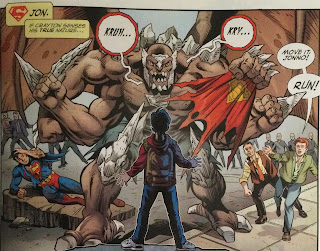 Like the original Doomsday, Doombreaker is coded with a deep hatred of Kryptonians.

Here it seems to sense Jon's make up includes something Kryptonian. This is before The Truth. Superman's identity is still a secret. I do like that this might look suspicious to some. It seems like Doombreaker is trying to label Jon as a Kryptonian.

Nice panel construction here, Jon so small in front of the monster. 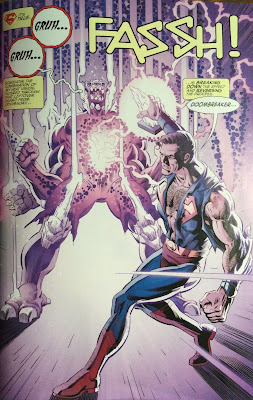 Luckily Lois arrives with the Spike which begins to glow. Through some comic book science, Superman is able to stop undo the mutations.

This story takes place in the past. We haven't seen Doombreaker before.

Is this a 'one and done' villain? Or will we be seeing Doombreaker again? 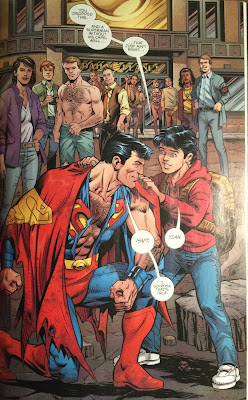 But I love this page.

Jon learned that the cape blowing in the breeze was a sign of Superman's death, his mortality. So he is more than happy to put the cape back where it belongs, on his dad's shoulders. Hopefully no one sees the family resemblance.

Anyways, this was a very fun sequel to the famous arc. The retelling was done nicely, showcasing some classic images from the story while adding Lois' commentary, looking back at it and what it all felt like.

The art is just as classic. I feel like I stepped into a time machine to read this. Jurgens and Breeding can still bring it.

I don't know if I need Doombreaker to be a recurring villain. But the power to keep adapting new powers is intriguing.

Overall grade (for this story): B+