There are very few games that you can legitimately hold up as titles that single-handedly created entire genres or subgenres, but one that has perhaps been a little unfairly overlooked over the years is Tactics Ogre. Essentially the progenitor of what has become known as the traditional turn-based isometric strategy RPG, since its SNES launch in 1995, the game never really got the kind of mainstream recognition that many others that followed in its footsteps did. The fact that its 2010 remake was a PSP exclusively didn’t exactly help matters either.

But at long last, after years of demands from a relatively small but decidedly vocal fanbase, the series is finally back. Square Enix has released Tactics Ogre: Reborn, another remastered launch for the 1995 original- and it’s fair to say that series fans will find it worth the wait, while newcomers, too, will find more than enough to fall in love with. Whether you’re looking for a captivating story with genuinely engrossing choice-and-consequence mechanics or a mechanically dense strategy RPG that gives you oodles of control over every aspect of your party, you’re likely to find it here. 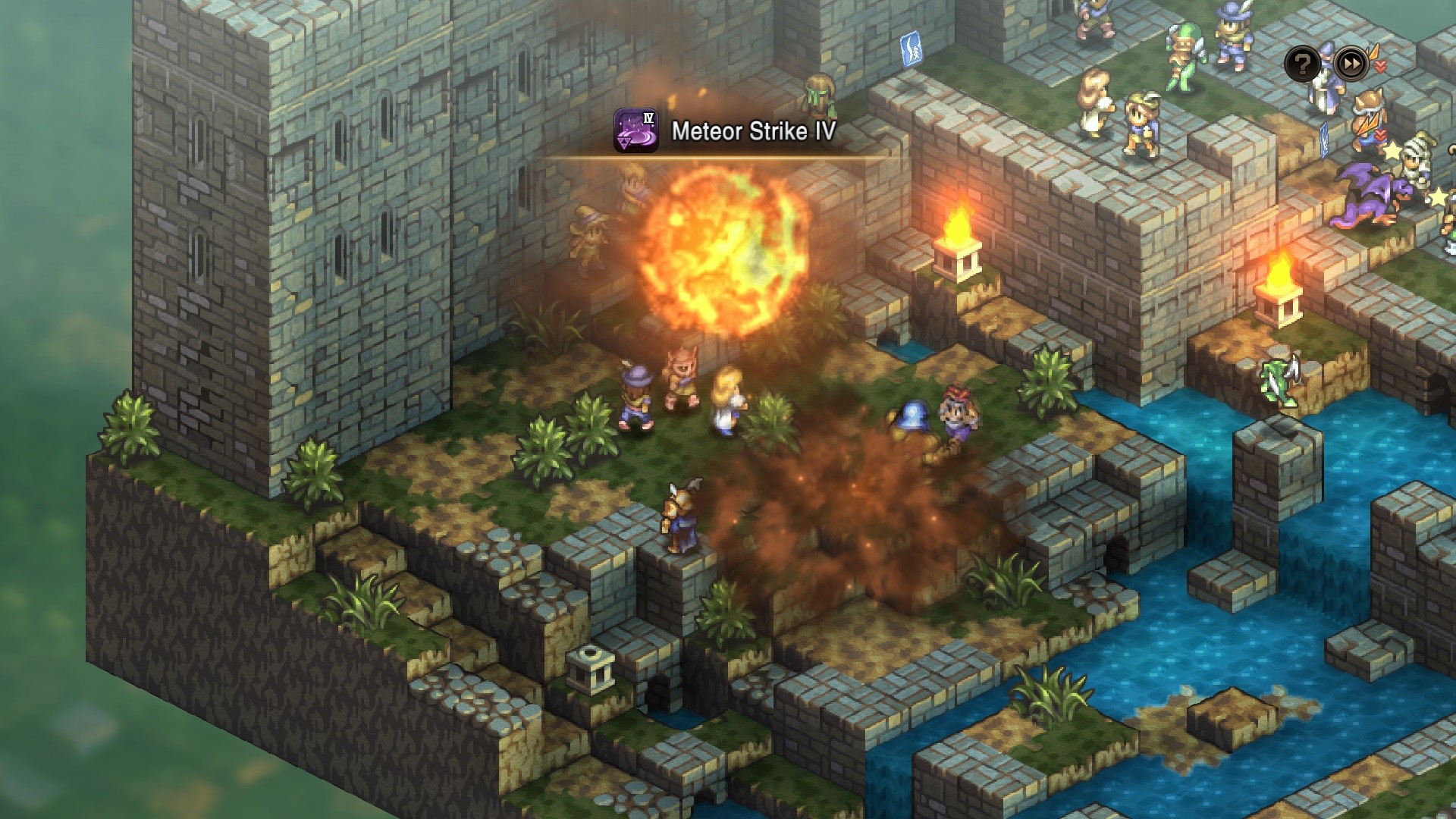 "Whether you’re looking for a captivating story with genuinely engrossing choice-and-consequence mechanics or a mechanically dense strategy RPG that gives you oodles of control over every aspect of your party, you’re likely to find it here."

The game is set in the kingdom of Valeria, a medieval fantasy world that is rife with conflict and power struggles. A young soldier named Denam serves as the protagonist, who, with his sister Catiua and their friend Vyce, is out on a mission to avenge the death of his father. But though things start out that way, they quickly find themselves embroiled in a budding rebellion, as the oppressed Walister clan begins to rise up and challenge the established power of the Galgastani. Things escalate further as the story progresses, and though the “how” of it is best experienced on your own, it’s safe to say that, as is befitting of the setting and genre, Tactics Ogre’s narrative scale is feels impressive, to say the least. Political machinations, differences in ideologies, moral quandaries, personal triumphs- the game’s story expertly juggles all of this and more. And though that’s something that is almost something of a staple for turn-based tactics games, it’s fair to say that even now, all of these years later, very few have managed to craft a world and tell a story as accomplished as nuanced as what’s on display here.

What strengthens the story even further is the amount of focus Tactics Ogre places on player choice, with a branching narrative that’ll place genuinely tough choices in front of you time and again. Your actions in the game tend to have drastic and far-reaching consequences, and will often even impact gameplay mechanics, which means that with every major choice you’re asked to make, you feel doubly invested. The game does an excellent job of lending weight to your actions.

Moving beyond the story to the actual gameplay, Tactics Ogre: Reborn shines just as the original did, and just as the PSP remake did. Given the fact that the bones of the experience are nearly 30 years old at this point, it’s not surprising that the battle system here isn’t as complex or layered as you’ll find in many other turn-based tactics RPGs, but there’s no faulting the execution. Battles are turn-based and take place on a grid, and the mechanical foundations will be familiar to you if you have any experience with the genre, but actually paying attention to things such as unit placement, classes, builds, and what have you feels far more important in Tactics Ogre than it does in most other games of its ilk. 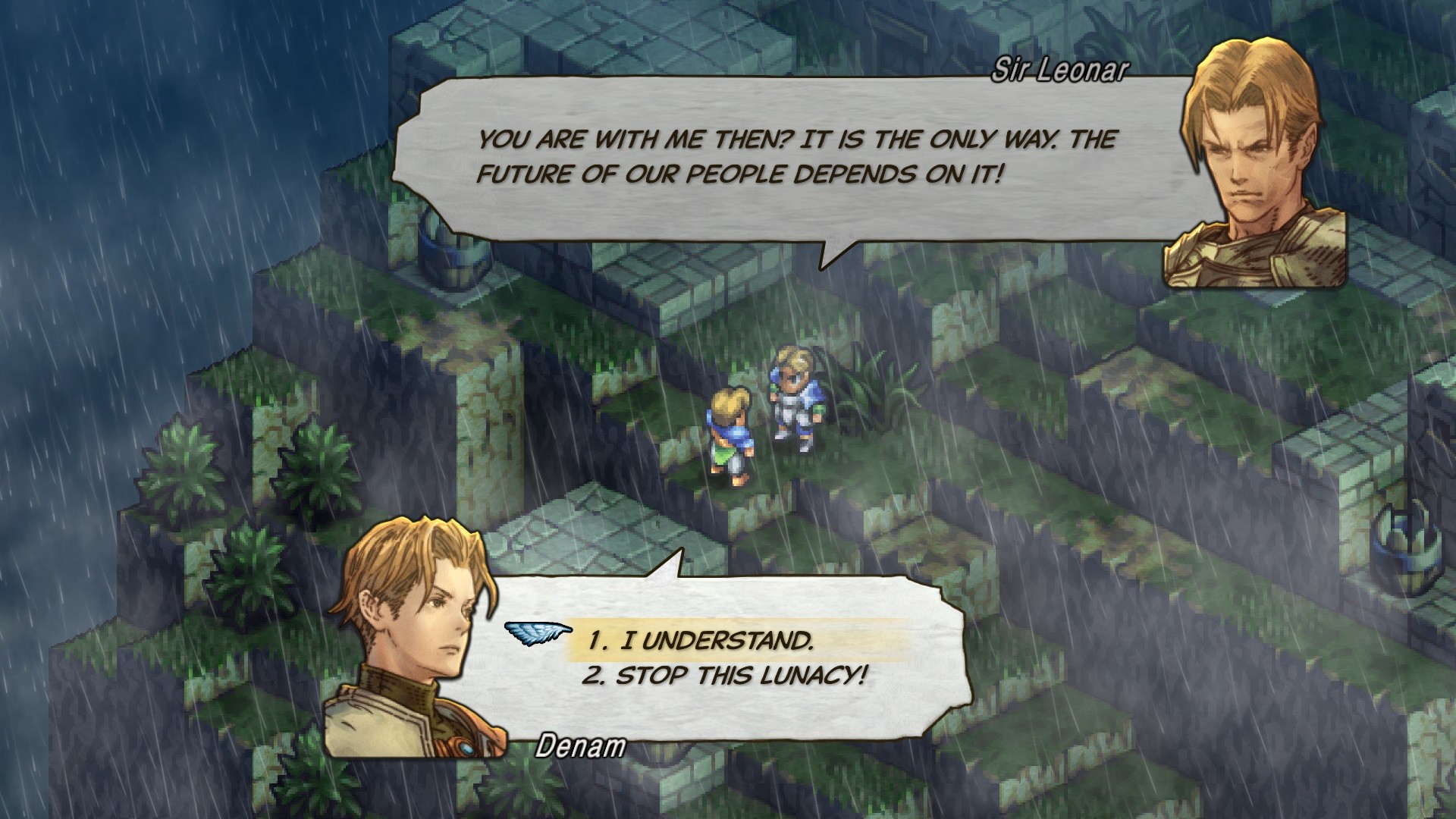 "Political machinations, differences in ideologies, moral quandaries, personal triumphs- the game’s story expertly juggles all of this and more. And though that’s something that is almost something of a staple for turn-based tactics games, it’s fair to say that even now, all of these years later, very few have managed to craft a world and tell a story as accomplished as nuanced as what’s on display here."

That’s largely down to the game’s expansive progression mechanics, which afford a great deal of control over every aspect of how you want to upgrade your characters and your part as a whole. From their equipment to their spells to their classes, there’s a lot to keep track of for each character in your company of soldiers, and you’ll be recruiting a lot of soldiers throughout the game that will belong to a variety of different classes. Each class can also equip multiple different kinds of gear and equipment, which means there’s plenty of room for experimentation and divergences even within a single class. The level of variety and freedom that the game allows for is staggering, even to this day. Fair warning though: if you’re fairly new to the genre, you might feel a little overwhelmed by the bevy of systems and mechanics the game throws at you right out the game (which is very similar to what it does with its story and worldbuilding right from the get go).

In fact, it would be fair to say that Tactics Ogre: Reborn actually improves upon the combat in some pretty meaningful ways, thanks to the various quality-of-life improvements and refinements that Square Enix has introduced with this release. For starters, there’s the Chariot Tarot system, which lets you rewind to previous moves to undo mistakes in the heat of the battle, while the PSP remake’s World Tarot system returns as well, which, once unlocks, allows players to jump straight to crucial story branches and make different choices to see how things would turn out.

Another major new improvement comes with the removal of random battles- training battles accessible via the world map grant you EXP and don’t have permadeath, which means you can easily level up characters for tougher battles should you need to. Add to that streamlined EXP and equipment mechanics, new skills, optional objectives during battles, and more, and Tactics Ogre: Reborn feels like a noticeably enhanced version of a game that’s already an all-time classic. That said, one change that’s likely to prove unpopular for many is the introduction of a party level cap. Your party level increases at certain points in the story, which is all well and good- but if your party level is, say, 9, you can’t individually level up characters past that cap until your party level increases as well. If you were hoping to do a lot of grinding and get rewarded for it by having a ridiculously overpowered party, unfortunately, the game doesn’t allow for that. 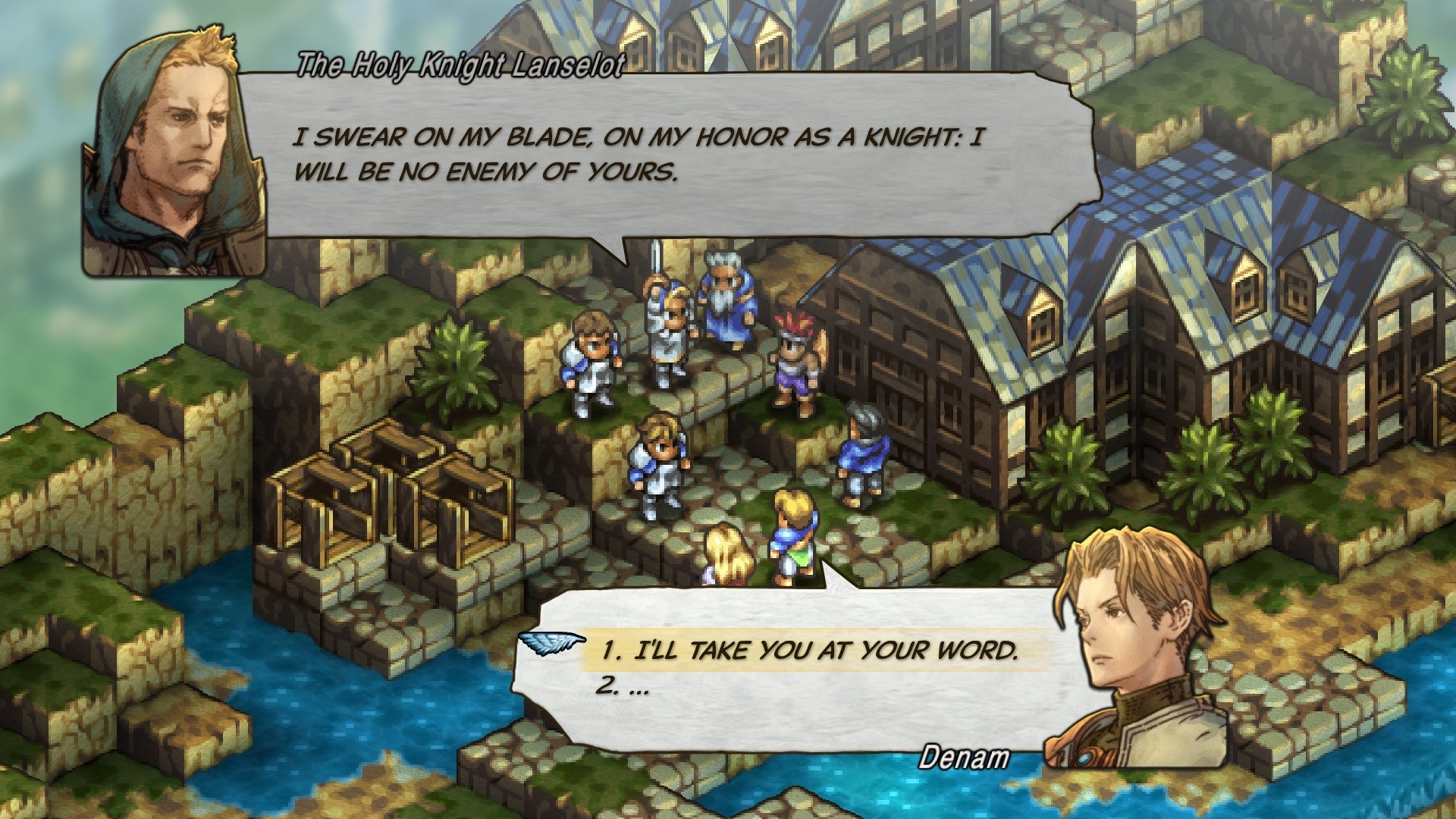 "While Tactics Ogre: Reborn does a mostly excellent job of updating and refining the original title’s gameplay and mechanics, one area where it feels like a disappointing step back is the visuals."

While Tactics Ogre: Reborn does a mostly excellent job of updating and refining the original title’s gameplay and mechanics, one area where it feels like a disappointing step back is the visuals. To put it bluntly, it feels like the visual style and personality of Tactics Ogre have been largely sucked out of this version, with character models that look too smooth and rounded and environments that are full of assets that seem to have been ripped out of a mobile game. It’s particularly disappointing to see because something like an HD-2D aesthetic would have been a particularly good fit for this game.

But though its visual update is a disappointing one, it’s not nearly enough to overcome the fact that Tactics Ogre: Reborn is still an excellently retooled and refreshed version of what is, in no vague terms, a legendary RPG. For fans of strategy RPGs, Tactics Ogre is almost required reading, but for years, circumstances have made it so that it hasn’t exactly been easily accessible to the masses. Now, Square Enix has brought a new and improved version of the game that, in spite of its visual woes, shines a bright and flattering light on it. If you have any interest in this genre, to not give Tactics Ogre: Reborn would be a big mistake.

This game was reviewed on the Nintendo Switch.