If you’re someone that enjoys watching TV series, movies, and even documentaries, then one of the best gadgets that you can get to enhance your viewing experience is an LCD projector. Now, there are many advantages of using an LCD projector to play and watch video-content in comparison to using a Smart TV. While Smart TVs do offer can display video at a relatively decent image quality, they still emit a lot of light, which can be quite straining for your eyesight. On the other hand, LCD projectors work by reflecting light, which is significantly less straining for your eyes, thus making it more comfortable to watch your video content. Moreover, while Smart TVs are limited to a specific image size that’s directly dependent on their screen size, LCD projectors are capable of producing much bigger images, which not only creates an easier viewing experience that’s less demanding for your eyes, but ultimately also makes that whole viewing experience much more immersive. Lastly, LCD projectors also don’t take up as much space as a large Smart TV would. With all that said, check out the VANKYO Leisure 470 Pro.

The VANKYO Leisure 470 Pro is a portable TFT LCD outdoor projector that can display video at a detailed 1080P Full HD quality with up to 170 ANSI lumens of brightness, featuring an adjustable projection size between 39″ all the way up to 250″ from a throw distance that can vary between 4.5 ft. to 25.26 ft., a set of powerful built-in 3W Mono Speakers that can deliver a loud, deep and resonant sound, built-in Controls, and also Universal Connectivity, as it boasts 2 HDMI ports, 1 USB port, one 3.5mm Audio Out, one AV Input port, and a Memory Card Slot, plus 5G/2.4G dual-band Wi-Fi Connectivity for both 2.4 GHz and 5 GHz networks.

Designed for outdoors use, this portable TFT LCD outdoor projector is lightweight, and compact, and perfect for watching and enjoying movies, TV shows, and any other video content outside together with family and/or friends.

Now, let’s have a more detailed look at the VANKYO Leisure 470 Pro and talk a little more about everything that this portable TFT LCD outdoor projector has to offer you. 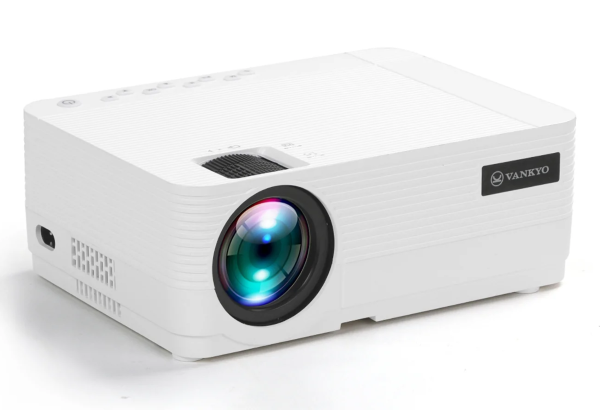 In comparison to other popular native 1080p projectors on the market, the VANKYO Leisure 470 Pro is around 40% smaller than most other models of 1080p projectors, which means that this projector barely requires any free space for its installation. 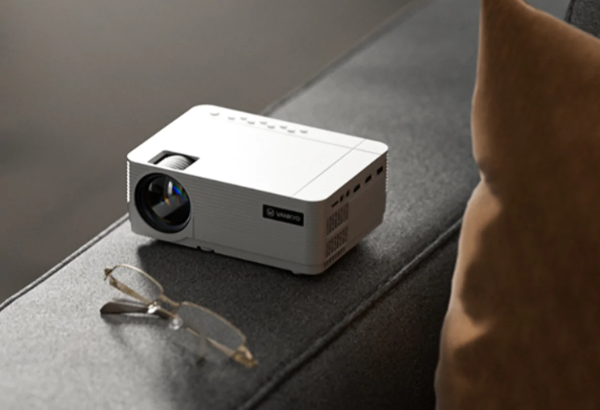 The projector also features a minimalist and modern design throughout its White body, which comes coated with a glossy finish, and also features a fairly sturdy construction.

Moving on to the projector’s image specifications. Since this is a TFT LCD home theater projector, the VANKYO Leisure 470 Pro utilizes a TFT LCD (thin-film-transistor liquid-crystal display) lens, which is powered by the latest LCD technology. 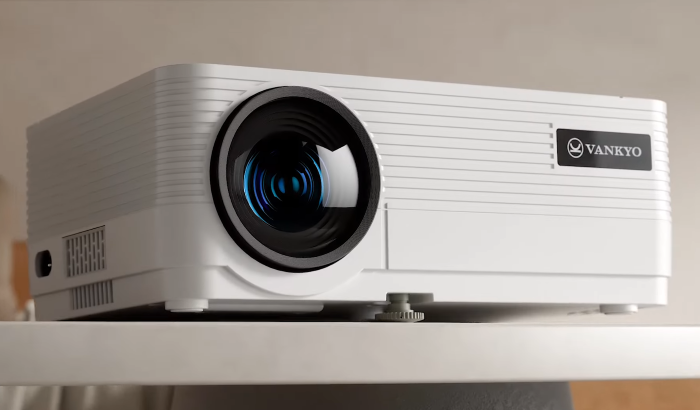 This allows it to display its video at a 1920p by 1080p native resolution, thus making it capable of delivering a detailed and authentic cinema-like image with a 1080P Full HD image-quality for a truly immersive viewing experience. 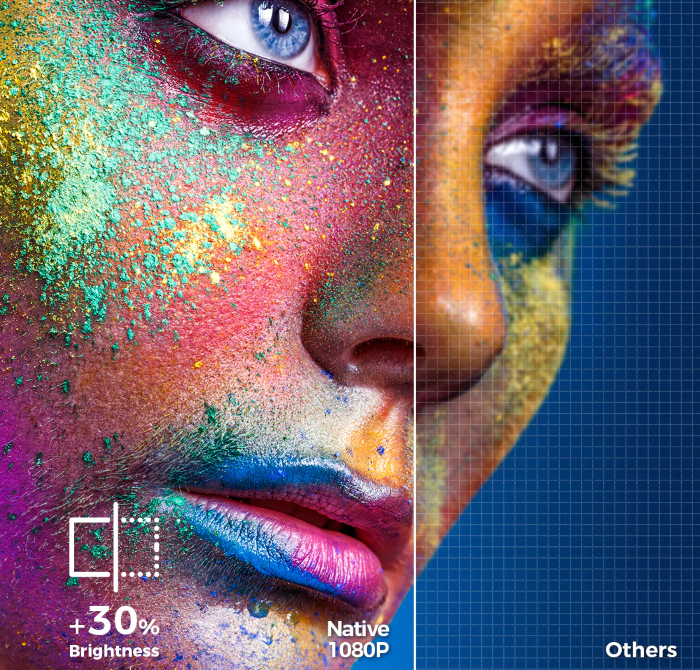 For its other video-display settings, note that the VANKYO Leisure 470 Pro boasts a 600:1 Contrast Ratio (allowing it to deliver a very detailed 1080P image-quality for ultra-sharp images), a 8-bit Color Processing that allows it to display high-colors within a broad range of colors, and a built-in LED Light (that works together with its TFT LCD lens) that features a maximum brightness-level of 170 ANSI lumens, which helps the projector deliver a very accurate image-clarity.

While the projector’s native display resolution is 1080P, note that the projector does support a total of four (x4) Input Signals (meaning Video Modes) for displaying its video in different resolutions, which include: 576i, 720P, 1080i, and 1080P (reminder that “i” stands for “interlaced” and “p” stands for “progressive scan”).

Since this projector features a Throw Ratio of 1.40:1 (D:W), it has an adjustable image projection size (i.e. its screen projection size) that can be set as low as 39″, or as high as 250″, from a throw distance that can vary between as little as 4.5 ft. all the way up to 25.26 ft. (maximum projection distance between your target wall / screen / cloth and the projector). 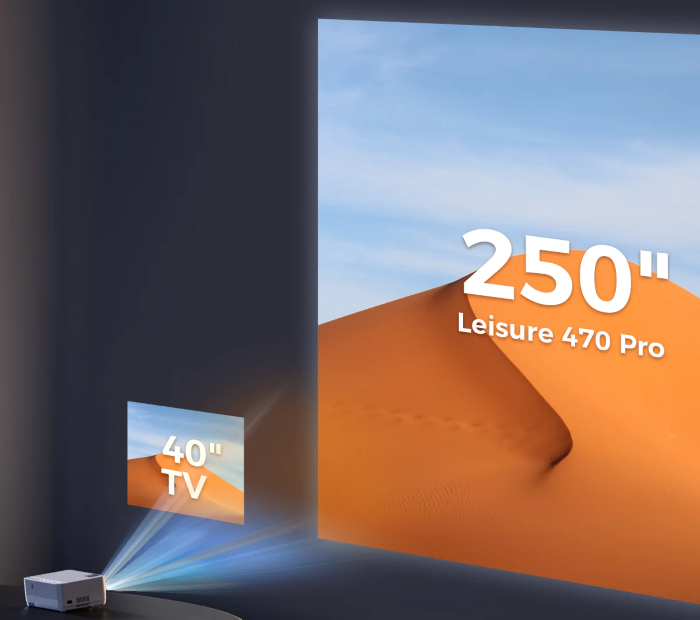 Adjustable image projection size up to 250″

Furthermore, it’s worth noting that this projector can be configured to display its video in one of three (x3) Aspect Ratio Settings, including 16:9, 4:3, or Auto (Auto-Detect).

The projector also integrates a Manual Focus System that allows you to manually perform Keystone Correction Adjustments (via a Thumb-Wheel) between ±15° (vertical only). 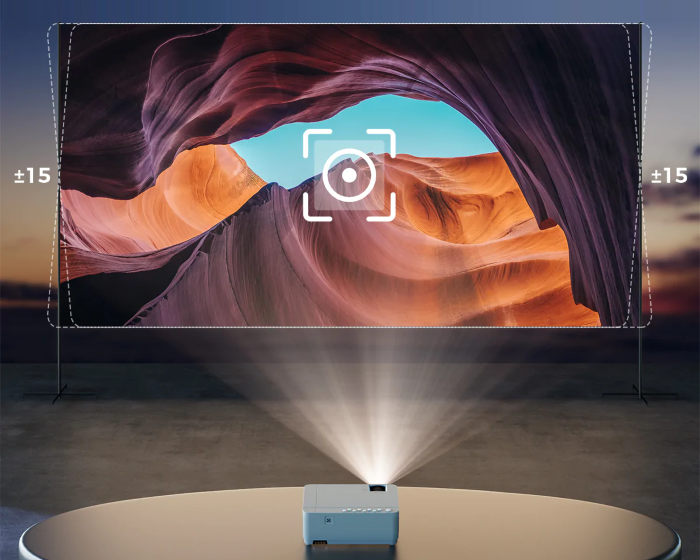 Moreover, the projector also boasts a Zoom In / Out function which can be set within a 50% to 100% zoom-variation that allows users to adjust its displayed screen size (best used when you have it mounted onto the ceiling or mounted to a wall). 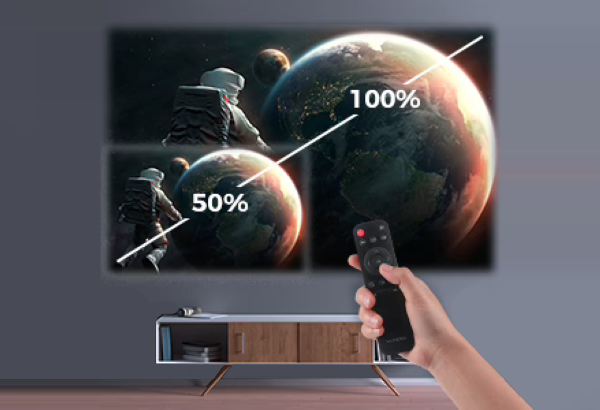 It’s also important to note that its TFT LCD lens also integrates Anti Blue Light capabilities, as it utilizes a low-blue-light emission in order to ensure that the Leisure 470 Pro is capable of diffusing blue-light reflection in order to ultimately reduce the amount of direct light entering your eyes. 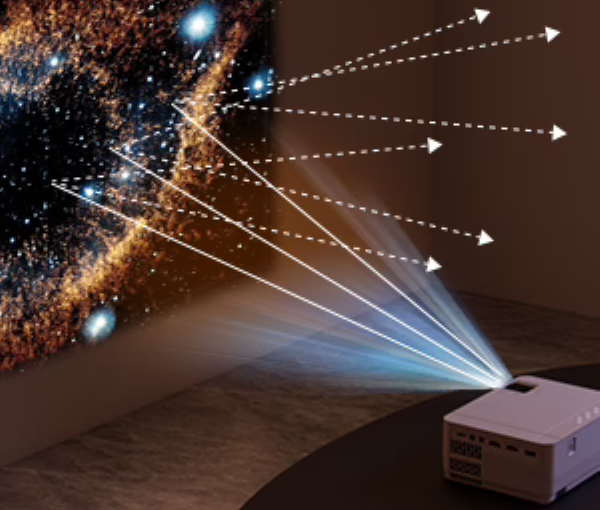 Lastly, for producing sound from your video content, the VANKYO Leisure 470 Pro also comes equipped with a set of two (x2) built-in 3W Mono Speakers (rated to have a Sound Impedance of 4 ohms), which make the projector capable of delivering a loud, deep and resonant sound for an immersive experience while watching your content. 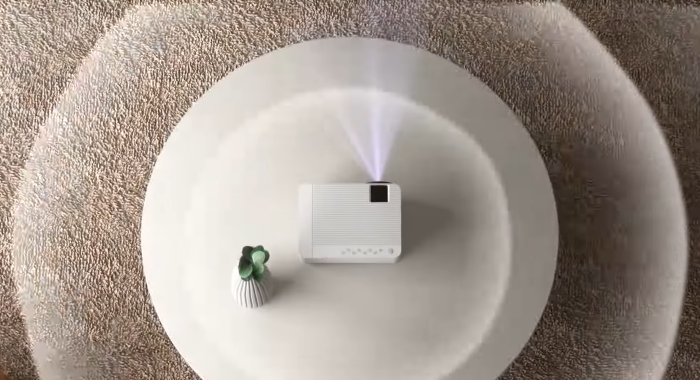 Despite its compact size, this projector comes equipped with a high-end dual fan heat dissipation cooling system that ultimately ensures none of its internal components ever overheat.

Together with this portable TFT LCD outdoor projector, users also get a Customized Carrying Bag that can be used to safely store and carry the projector when it’s not being used. 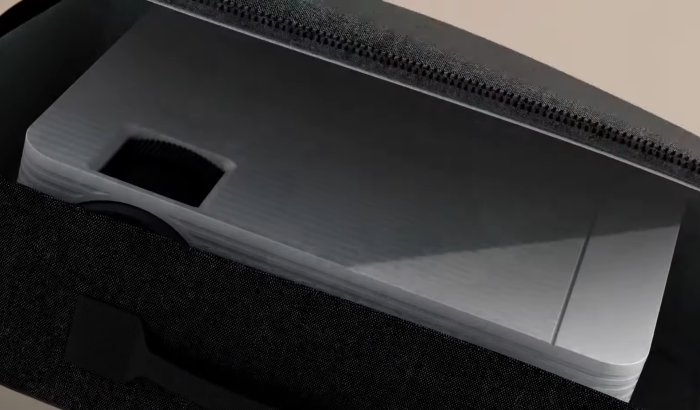 Then, when it comes to the projector’s interface, as said before, the VANKYO Leisure 470 Pro also integrates built-in Controls, which can all be found at its top-side. 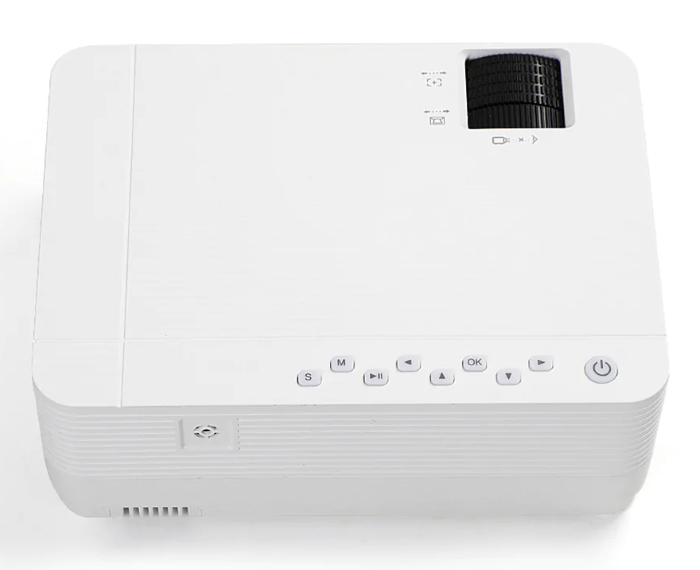 At the back-side of the projector, users can also find all of its connection ports. Going from left to right, we have a Memory Card Slot (TF slot), followed by a 3.5mm Audio Output port, then a AV (Audio/Video) Input port, which is then followed by two (x2) HDMI ports, and finally, a USB Input port. 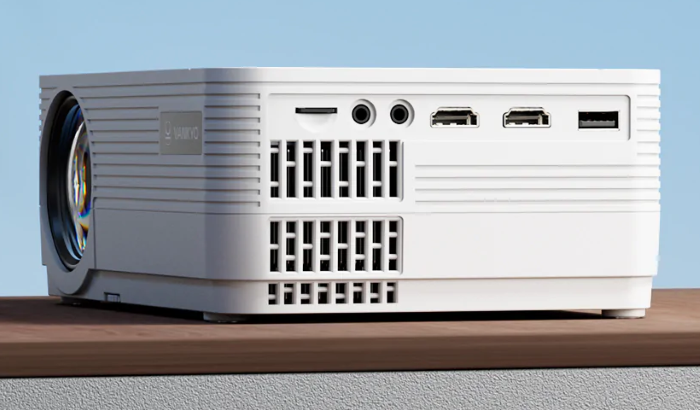 Its two HDMI ports also give this projector compatibility with any Fire TV stick, Roku stick, and more, thus making it capable of playing video from services like Netflix, Amazon Prime Video, and Hulu.

On top of its multiple connectivity options, the VANKYO Leisure 470 Pro also features 5G/2.4G dual-band Wi-Fi Connectivity for both 2.4 GHz and 5 GHz networks, which allows this projector to have a Screen Mirroring function via a wireless connection with any Wi-Fi-enabled device (such as a Smartphone, tablet, or laptop). 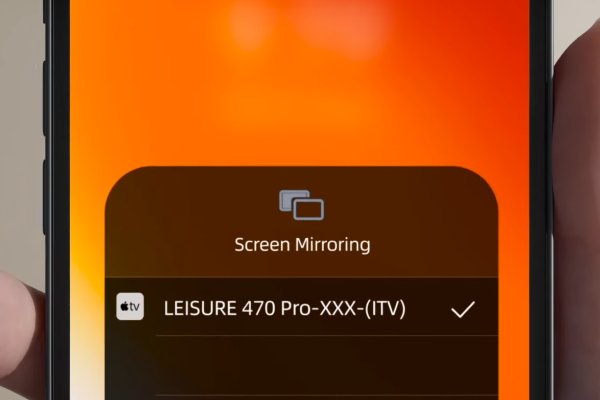 That same 5G/2.4G dual-band Wi-Fi Connectivity also allows this projector to have a Multi-Screen Interaction. 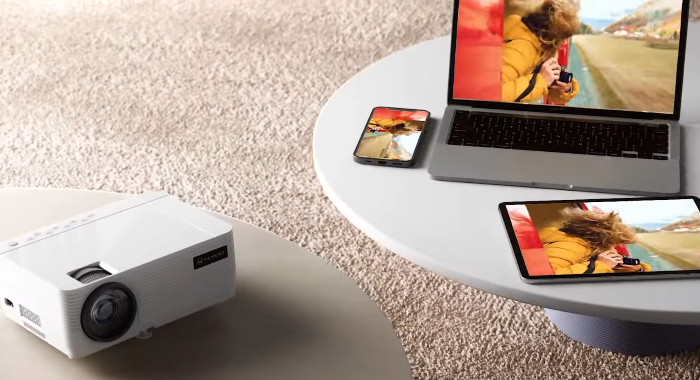 The VANKYO Leisure 470 Pro is a portable TFT LCD outdoor projector that can display video at a detailed 1080P Full HD quality with up to 170 ANSI lumens of brightness, featuring an adjustable projection size between 39″ all the way up to 250″ from a throw distance that can vary between 4.5 ft. to 25.26 ft., a set of powerful built-in 3W Mono Speakers that can deliver a loud, deep and resonant sound, built-in Controls, and also Universal Connectivity, as it boasts 2 HDMI ports, 1 USB port, one 3.5mm Audio Out, one AV Input port, and a Memory Card Slot, plus 5G/2.4G dual-band Wi-Fi Connectivity for both 2.4 GHz and 5 GHz networks. 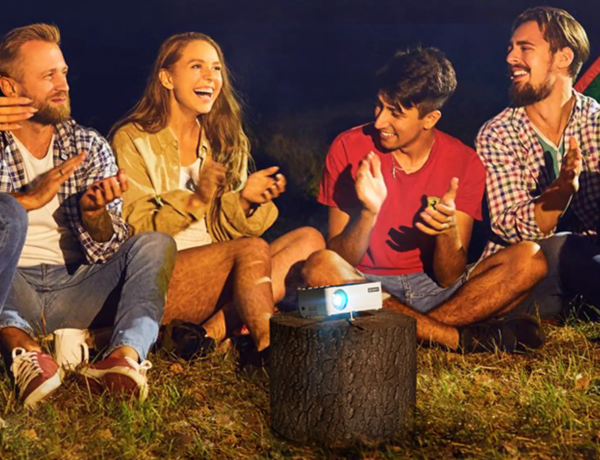 All in all, this portable TFT LCD outdoor projector is an awesome choice for you to go with if you’re looking for a projector that is capable of displaying video at a high image-quality while also being very versatile in terms of its connectivity options. All that makes it perfect for watching and enjoying movies, TV shows, and any other video content outside together with family and/or friends.

If you’re interested in buying it, each unit is currently discounted from its standard price of $249.99, and is now going for just  $169.99 (saves you $80), and each purchase also comes accompanied by a 3-Years Warranty. You can order yours online right now, directly from VANKYO’s official shopping page.