Game Over, by Mac MacLean. MacLean's comics are thoughtful and meditative, and often turn toward the topic of loss. This comic takes on death directly, mediated through MacLean's lifelong love of video games. There's an interesting scene early on when MacLean is a young child and the idea of dying in the game freaks them out. They eventually come to understand that no matter how scary a game might be, no matter how visceral their demise, no matter how difficult the action might get to win, death has no permanent consequences. Even in games designed to explore the concepts of grief and loss, they are still mission-based. Things are gamed to make you win eventually. MacLean then goes on to say that only Dungeons and Dragons, in all the games they've played, offers the possibility that their characters might not come back. Everyone processes grief differently, and finding a genuine comfort through a role-playing game makes sense. 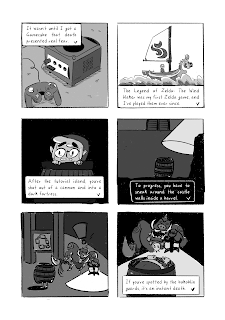 MacLean doesn't discuss this, but the reason why D&D can do this is not just that it has random elements, but that it is also profoundly collaborative and character-driven. In a good campaign, your character has a life that you give them, rather than a character determined by a video game. At the same time, when a character dies, they can be mourned by their comrades in the same way that seeking out others is so important to mourning. MacLean does note that the closed-system nature of video games that once was a comfort in the face of grief and negative emotions was having diminishing returns as they grew older and the pain became harder to comprehend. That's because a video game, like many other coping mechanisms, is usually a profoundly isolating experience. MacLean cleverly slips in and out of drawing scenes from video games and incorporates them into their narrative, but the scene where they don armor and discuss seeking legitimacy for their grief reflected in the media they consume is especially effective. They are literally trying to protect themselves and feel safe as they process these feelings. It's clever precisely because it's entirely sincere. 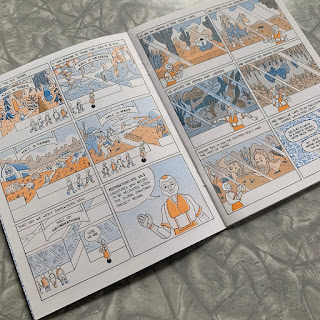 The Snowman and To Mak Patar, by Kevin Reilly. Reilly is a great example of a cartoonist who almost exclusively does genre work in a way that's consistently thought-provoking and visually exciting. In The Snowman, Reilly tells a tale of a (mostly) utopian far future in a world without disease, war, or mental illness like depression. Children are brought to museums to become educated about past practices and phenomena like farming, war, and trees. This story follows a narrator recalling a visit as a child to see the Hall of Abominations. These were creatures relocated (i.e., imprisoned) when the "global smoothing project began." It includes sandmen, mermen, footmen (literally human heads attached to feet) and others, but the creature that left an impression was the snowman. Snowmen were wild, eating cattle, bringing destruction on human villages, and sometimes singing in groups once a year. When the teacher tells him that the snowman in the display, the last remaining snowman, looks "depressed," the narrator doesn't understand what this means. The class is bummed out by this, so the teacher distracts them with musical robots, but the narrator sees the snowman rise, frost over the window, and return to what he was doing. There's no further commentary, nor is any needed. Reilly's character design and his use of color are both exquisite and delicate. He totally sells the reader on this environment before revealing the price that was paid for it. 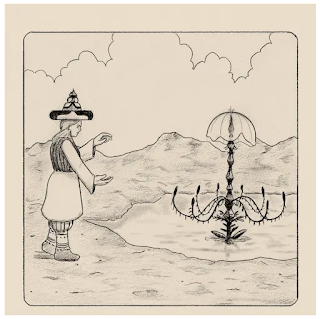 To Mak Patar is an excerpt from a larger book Reilly will be publishing; the new Parsifal Press published this mini. This is a quest story following a young woman named Corinne Jitan, undertaking a forbidden journey with a stolen box to gain the secrets of a mountain. Reilly uses a completely different approach here, with black & white art that features lots of grayscale shading and a delicate line weight. The shapes and creatures she encounters are reminiscent of Jim Woodring's Frank character and his world, but the goal here seems more linear. This portion is a kind of visual problem-solving test, as Corinne strives to use the tools available to her in order to progress, while dealing with monsters and other obstacles. I'll be curious to see it with a wider context.