Final Fantasy 7 fever has hit fever pitch again. Since the beloved RPG first took the industry by storm upon its launch for the PS1 way back in 1997, Square Enix has kept on finding ways to keep that world and story alive and kicking. Of course, nothing it’s done on that front has ever come close to the scale of what we’re seeing now- 2020 saw the launch of Final Fantasy 7 Remake, the first instalment in a trilogy that will collectively reimagine the classic RPG, while next Winter will bring its sequel, Final Fantasy 7 Rebirth.

And to make the wait until its launch a little easier, Square Enix has revived, revitalized, and re-released another game that might not be as big in stature as its precursors, but is beloved in its own right. Crisis Core: Final Fantasy 7 is a vital part of this self-contained universe, serving as a prequel to Final Fantasy 7 and telling a tale that’s bound to serve as crucial backstory for Square Enix’s ongoing FF7 Remake trilogy. Since its launch a decade and a half ago, however, it’s been stuck on the PlayStation Portable, the system it originally launched for- until now.

"Crisis Core: Final Fantasy 7 Reunion straddles the line between being a remaster and being a remake with great aplomb, making significant upgrades and refinements in a number of key areas while ensuring that in terms of actual content – both on gameplay and story fronts – is virtually unchanged."

Crisis Core: Final Fantasy 7 Reunion brings the portable action RPG to modern platforms while sprucing it up in several ways, and Square Enix has gone about it in almost the perfect way. It straddles the line between being a remaster and being a remake with great aplomb, making significant upgrades and refinements in a number of key areas while ensuring that in terms of actual content – both on gameplay and story fronts – is virtually unchanged. Square Enix calls it “more than a remaster”, and it certainly lives up to that billing. Though this is still Crisis Core at its, well, core, it’s more than just a simple upres.

The biggest improvement, and the one that players will notice right off the bat, is the visuals, to no one’s surprise. The original Crisis Core launched for incredibly weak hardware (especially by current standards) fifteen years ago, so it’s no surprise that as far as graphics are concerned, it hasn’t aged particularly well. With that in mind, the technical leap on display in Reunion is hard not to be impressed with.

Square Enix has ported the game over to Unreal Engine 4 for the purposes of this remaster, and everything from character models and environments has been completely redone and sports much greater levels of detail. While it’s obviously not on par with something like Final Fantasy 7 Remake (which wouldn’t be fair to expect of what is ultimately still a remaster anyway), it does look consistently sharp and detailed. Animations are still a little stiff and look right out of a 2007 game (which they are), but the remaster does an admirably job of overhauling the visuals by and large. It’s still a decade and a half old, but rather than looking as it really did back then, it looks like what I remember Crisis Core looked like when I first played it back in the day.

Reunion polishes up the production values of the original in other ways as well, from the music (which was already excellent) being improved to voice lines being rerecorded. In spite of the latter, however, storytelling remains as goofy and borderline laughable as it has always been in this game. Stilted and inane writing and grating voice acting frequently make for conversations between characters that make absolutely no sense, while protagonist Zack has a boisterous personality that can be a bit much at times (though he does tend to grow on you). Of course, more than a few major plot developments can also be too contrived- though that is fitting enough for a Final Fantasy 7 experience. 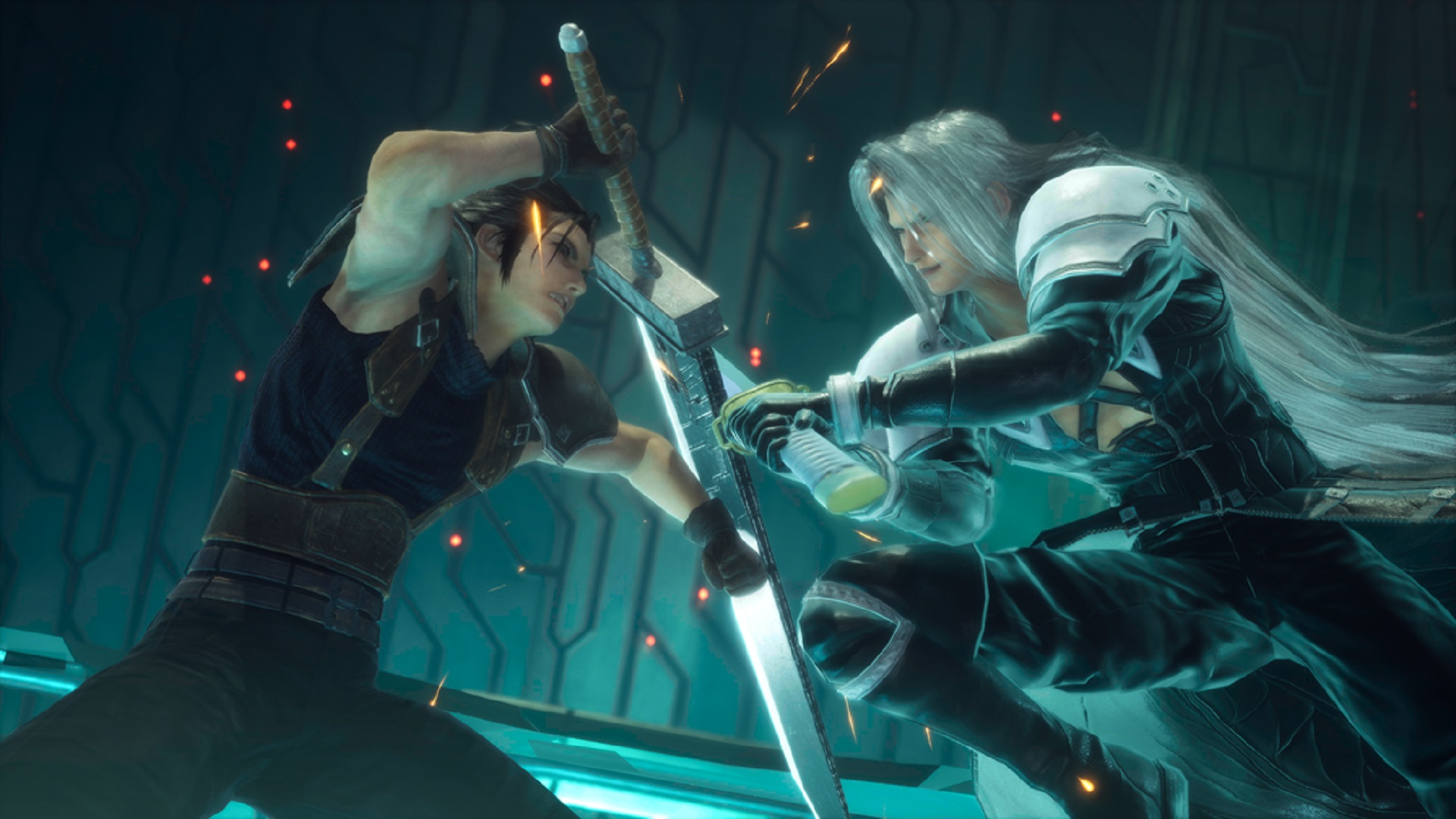 "Square Enix has ported the game over to Unreal Engine 4 for the purposes of this remaster, and everything from character models and environments has been completely redone and sports much greater levels of detail."

Of course, Crisis Core’s story and the melodramatic manner in which it often chooses to tell it are exactly what endeared the game to no few people when it first launched for the PSP, and if you were in that group, there’s a good chance that you’ll still find plenty to enjoy here- I most certainly did. Ultimately, it’s hard not to be invested in Zack Fair’s story and its tragic ending, while the way it all recontextualizes Final Fantasy 7’s story adds even more value to it, especially with the Remake trilogy currently in full swing. Just know going in that Crisis Core’s story has been brought over as is in this remaster, and it’s one of the aspects of the game that has aged the worse.

Conversely, one area where Reunion is an absolute blast, almost without any reservations, is the combat- which, of course, was very true for the original Crisis Core as well. Combat functions like an action title, with one button being dedicated to your regular attacks, and one each to blocks and dodges, both of which function with satisfying smoothness. The fact that the game runs at a crisp 60 FPS obviously helps things, and even at its core, the moment-to-moment action remains enjoyable.

Of course, things are spiced up by the introduction of other elements in the mix, such as equipping Materia orbs, which, in turn, give access to various abilities and magic skills that you can use at any time, as long as you have the MP or AP for it. Another crucial mechanic is the Digital Mind Wave, or the DMW, which is essentially a slot machine that’s always rolling on the top left corner of the screen in combat, and grants various buffs and bonuses at random, including having unlimited MP or AP for short windows, having higher stats for a short period, or even being able to call in Summons (who all have brand-new and gloriously explosive animations to gawk at). The complete randomness of the DMW might put off some players, but personally, I love how dynamic and unpredictable it can make battles, and how much it helps to stave off repetition. 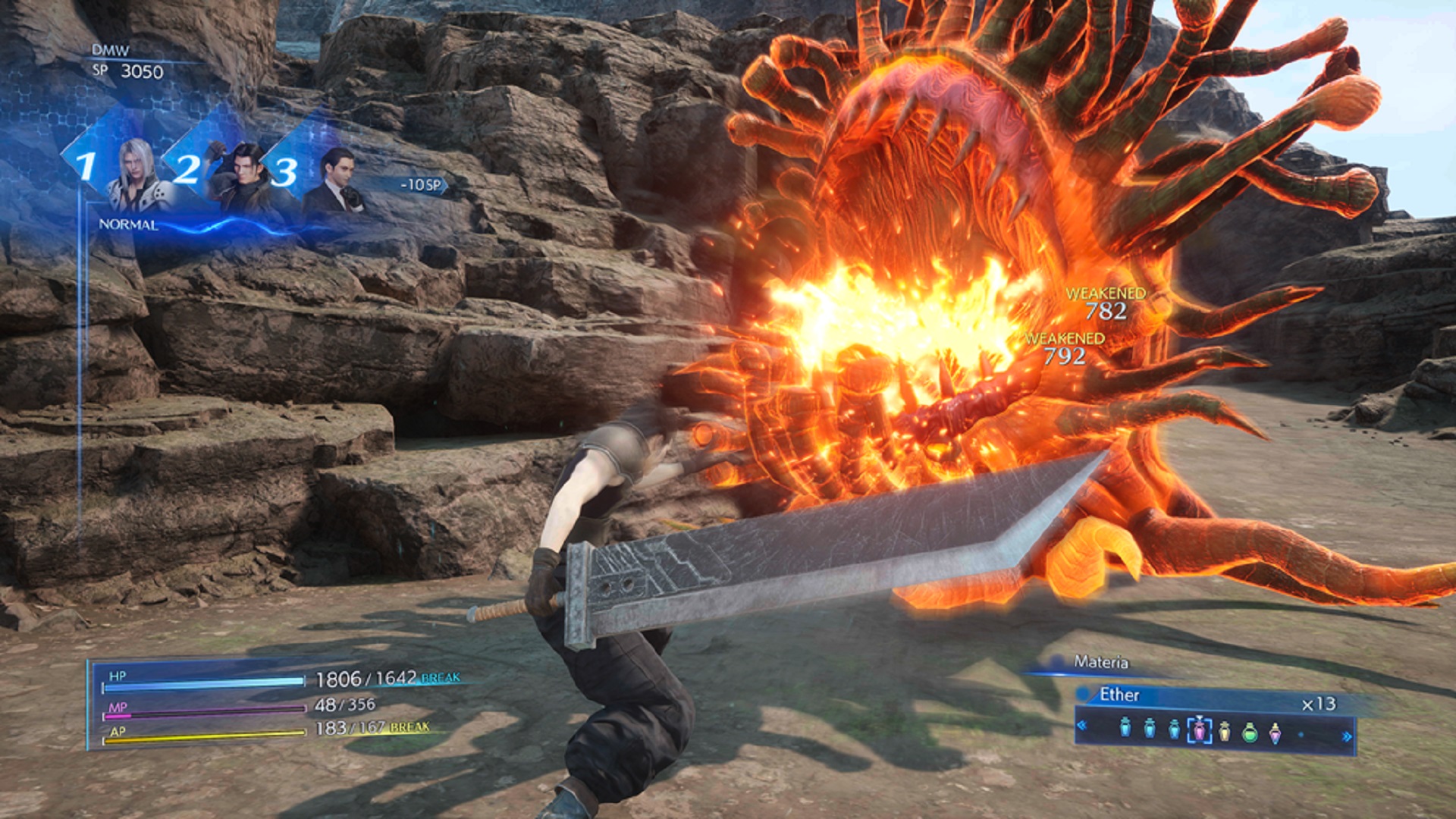 "One area where Reunion is an absolute blast, almost without any reservations, is the combat."

Don’t get me wrong, Crisis Core is still a very straightforward game- this is still a PSP title, and that shows in its design. Combat is much more straightforward than what we get in modern action RPGs, and the level design in particular is barebones at best, with little to no room for exploration and levels being comprised largely of collections of corridors. Though Reunion deserves a lot of credit for how radically it improves Crisis Core’s visuals and the several quality-of-life improvements it makes, it’s also clear that, by design, it doesn’t make much of an effort to modernize other aspects of the experience as well. Of course, that straightforward and old school nature has an undeniable charm of is own, and even though Reunion doesn’t breathe life into Crisis Core the way Final Fantasy 7 Remake did into the original FF7, it still does an awful lot more than you’d ordinarily expect from a remaster.

As long as you’re calibrating your expectations, you’re likely to have a blast with Crisis Core: Final Fantasy 7 Reunion. It looks sharp, the combat is a lot of fun, and the story, for all of its issues, has its bright spots, especially if you’re invested in the Final Fantasy 7 universe. Sure, crucial aspects of the experience have clearly not aged very well, but there’s still more than enough here to attract not only those who’ve played the original Crisis Core, but also new fans who’re looking to dive deeper into the larger FF7 story. Without a doubt, this is the best way to reunite with this underappreciated PSP classic.