During the 8-bit era, arcade sticks were a niche market. Nintendo offered up the NES Advantage, which was a solid if not workmanlike option. It was heavy, with high build quality. It offered adjustable rapid fire as well as the sometimes-effective slo-mo feature. In hindsight, it was the best option available in North America. Third party controllers were becoming a thing, but most of those were cash grabs, uninterested in longevity or quality. When Sega ushered in the 16 bit generation, the Arcade power Stick soon followed. Sega built its branding on accurate arcade ports during the early Genesis years, and the arcade stick was a necessary presence to maintain that image. It was also well built, with similar options as the NES Advantage, sans the slo-mo feature. When the Super Nintendo arrived, a sequel to the NES Advantage was released by Nintendo, unimaginatively named the "Super Advantage". Out of necessity it had more buttons, but the granular control of rapid fire rate was lost to low/hi turbo settings, which is a step back in my opinion. The sturdiness of the stick was roughly on par with the original. The Turbografx-16 had the official Turbostick, which also had switchable rapid fire as well as slo-mo. These aforementioned arcade sticks all hovered around the $50-$80 range at the time.

Meanwhile, in Japan, a little controller company named Hori was building home console arcade sticks closer to the standards of arcade machines. Arcades in Japan had joysticks with microswitches, which give tactile and audio feedback as to the registered input by the joystick. This was not the case in North America. The intent of the microswitch is to increase the accuracy of the inputs, which can be tested by using a program that detects inputs, like the 240p test suite, for example. The conductive rubber membranes that are inside most retro controllers were also used in cheap arcade sticks, and the effectiveness will eventually decrease as the rubber ages. This extra mechanical nuance of microswitches increases the longevity and cost of the joystick.

In addition to improved precision, the entire outer housing of Hori arcade sticks make an impression. They are larger and heavier than anything released stateside, with mostly steel hulls. One of the problems with the domestic options was that they were all too small to play comfortably on the lap.  The Hori sticks are all significantly larger, spanning over both legs and in general are much more comfortable. Rapid fire options are individually present on each of these, but the slo-mo feature is not present. 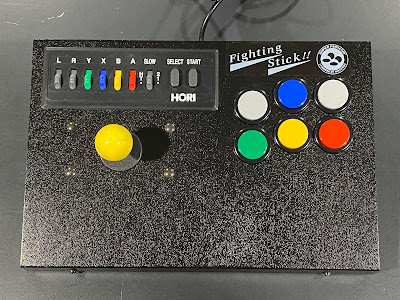 The PC Engine and Super Famicom versions have a rugged steel hull, and that adds the overall weight and presence. The two sticks are basically identical in build and form, aside from the different color schemes for buttons. Each has six action buttons, along with start (run) and select. The buttons are serviceable, if a bit "plungy". The cord length is roughly five feet, which is long for a Japanese controller, but short for North America.
There are two sticks released with multiple system capabilities, called the Fighting Stick Dual and the Fighting Stick Multi. The Dual has a diminutive footprint, and is compatible with the Genesis/Mega Drive and Super Nintendo/Famicom. The cord has controller plugs for both at the end. It does not have microswitches in the joystick nor the buttons, but the rubber membranes provide more feedback than typical controllers. There is almost a "thud", a catch point that is detected with the movement of the joystick that is hard to describe, so it is somewhere in between microswitches and membranes as far as tactile presence. 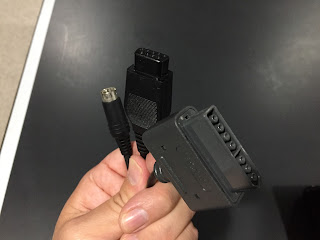 The Fighting Stick Multi is compatible with Mega Drive/Genesis, Super Famicom/Nintendo, and PC-Engine. To accommodate three different console plugs, the cords are removable. While this makes sense, it also makes them easier to loose. If you scan through eBay, most of these will be missing at least one of the three cords. The size is a on par with the steel versions mentioned earlier. The hull is plastic, and the stick has lead weights inside to give it some additional heft. The stick is micro switched, but it does not have the same short throw that the steel brethren have. The buttons have rubber membranes as well, reducing the sense of overall quality. Still, it is a very versatile and economic stick covering three major consoles, and a good choice if storage space is a concern.
The next three models are back to being system specific, called the Hori Fighting Stick Neo, Hori Fighting Stick SS (Sega Saturn), and the Hori Fighting Stick PS (Playstation). These all share the same body molding, footprint, build quality and styling, except for the button count. These sticks feel really solid, perhaps more than the PC Engine and SNES versions. Even though they are not entirely encased in steel, the joints and panel seams are very tight, making the sticks compact and dense.  The joystick is micro switched as well are the buttons.  Individual turbo switches are present for all buttons. This is a boon for the Neo, as many Neo Geo games benefit from rapid fire, and that was not a feature present on any official Neo Geo controllers.
It may be a product of its time, but all of buttons on these Hori sticks are smaller in diameter than what is standard now (30mm). Modern arcade sticks are much larger today, with a wide foot print, and the larger buttons make sense. However, with the smaller base of retro sticks, the 30mm buttons would look ridiculous.

Can you imagine if sticks with this level of quality came out here in the states back in the day? Maybe they would have sold well, maybe not. Given the prevalence of shooters in the early 16-bit days, its not too much of a stretch to think there would have been a market for them, especially considering how many trash controllers were sold during the era.

Hori continues to make arcade sticks today, and their line of Real Arcade Pro sticks are some of the most prevalent on the market. Those are all well and good, but I wanted to focus on their sticks that they released in the silver age of home video games, where arcade sticks were less prevalent.