How the now sub-tropical climbs of Southern California came to be volcanic in nature isn’t clear, although with the real-life San Andreas fault slicing its way through California itself, it isn’t a stretch to imagine a colossal earthquake has caused major seismic changes to the landscape – either via natural causes or maybe by GAIA terraforming the landscape – with lava now spewing out of cracked Earth. LA’s topographical changes are interesting too; the landscape of Burning Shores is much more undulating compared to modern day Los Angeles, with sea water submerging most of the former metropolis, creating a network of islands which Guerrilla Games are reporting as fully explorable by water as they are by air.

According to Guerrilla Games’ press release, Aloy travels to this untamed wildland south of the Tenakth Clan Lands in hot pursuit of a sinister new threat. The DLC’s story picks up where Horizon Forbidden West leaves off, with new machines, characters, and weaponry certainly set to feature in this dangerous new territory. The reveal trailer, and indeed Guerrilla’s press release, are both quite short, but there’s enough shown to gleam some insight into Burning Shores’ possible narrative directions without resorting to pure guesswork.

This is especially true when considered in tandem with a couple of key data points discoverable in Horizon Forbidden West, the principal of which is a glyph Aloy scans during the A Dam Shame side quest. It’s a note left by Oseram delver Gildun whom Aloy first encounters in Horizon Zero Dawn expansion The Frozen Wilds, with him in need of rescue after accidentally diverting the flow of water at Greycatch dam and flooding Deep Din with him inside. These exploits are referenced in the glyph left behind at the site of the old Hoover Dam alongside him describing his intent to head south to a place known as the Burning Shores. Will Gildun make an appearance in Horizon Forbidden West: Burning Shores? It seems likely, although with him neglecting to raid the Hoover Dam’s innards for loot over safety concerns perhaps Aloy will encounter a Gildun more in tune with the risks of raiding crumbling structures as opposed to the bumbling adventurer in need of help in The Frozen Wilds.

Another character speculatively returning is Brin, the wandering Banuk shaman. When first encountered by Aloy in Horizon Zero Dawn, Brin talks about incoming storms, death, and destruction, predictions we can ascribe to the events in Forbidden West and the revelation at the game’s end that malevolent AI NEMESIS is currently hurtling through space towards Earth on a mission to eradicate humanity. Like Gildun, Brin’s mention in Forbidden West is via scanned glyphs, this time left for Aloy to discover by a party of travelling Oseram. They’d witnessed Brin drinking machine fluid before exclaiming he’ll be heading to “the place of fire and brine” – this place, of fire and brine, is surely his description of the Burning Shores. Plus, Brin talks of meeting Aloy again in the Forbidden West during their conversations in Zero Dawn. 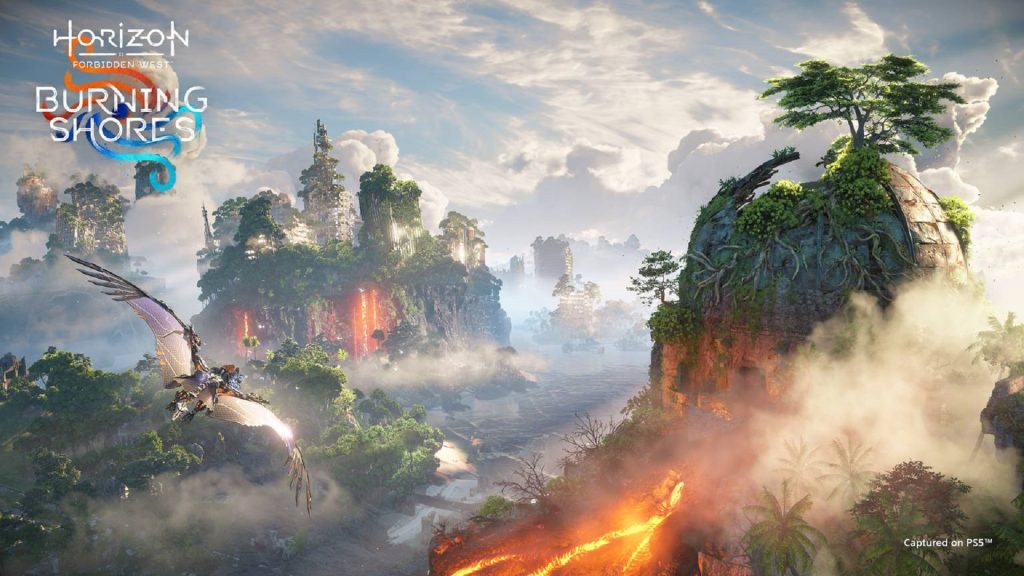 Should Gildun and Brin reappear in the Burning Shores, it’s tough to say at this stage how heavy their involvement will be in the DLC’s narrative. The impending threat of NEMESIS approaching Earth means Aloy and her allies are now tasked with figuring out a way to stop the AI before it causes widespread death and destruction to humanity. Let’s not forget NEMESIS has been responsible for every major story beat in both mainline Horizon games – it triggered HADES with the extinction signal which set the wheels in motion for Zero Dawn and destroyed the Far Zenith colony in Sirius causing them to flee back to Earth to recover GAIA to then colonise a new planet in Forbidden West. The event of NEMESIS returning to Earth, and the ensuing battle, might just be too big a story to be told in DLC. It’s possible then that Brin might hold a clue to figuring out the colossal task of stopping the destructive AI, with the actual act of battling NEMESIS reserved for a third mainline Horizon game. These clues, and indeed the knowledge to destroy NEMESIS may just lie somewhere in the Burning Shores.

That’s not to say Burning Shores will be bereft of battles. No, it’s almost a complete certainty that Aloy will finally have to take on a behemothic Metal Devil. These Horus Titans are dotted across Earth, laying in place for centuries after Project Zero Dawn was initiated and they were forcibly deactivated mid-flight. Reclaimed by the landscape just like LA’s iconic landmarks, the serviceability of the Horus Titans is largely unknown. The one in which HADES sought refuge still has a functioning computer core, whilst Aloy managing to source power from the cell of another fallen Metal Devil indicates there’s still life inside of their skeletal shells. Given their instrumentality in the destruction of Earth’s bio life during the Faro Plague, the reactivation of a Horus Titan could spell doom for the technologically primitive humans who’ve since repopulated Earth. Unfortunately for Aloy, the Horus Titan lying dormant behind the Hollywood Sign reactivates in the DLC’s trailer, no doubt confirming it’ll be a major distraction for Aloy and her allies as they seek to prepare for NEMESIS’ arrival. 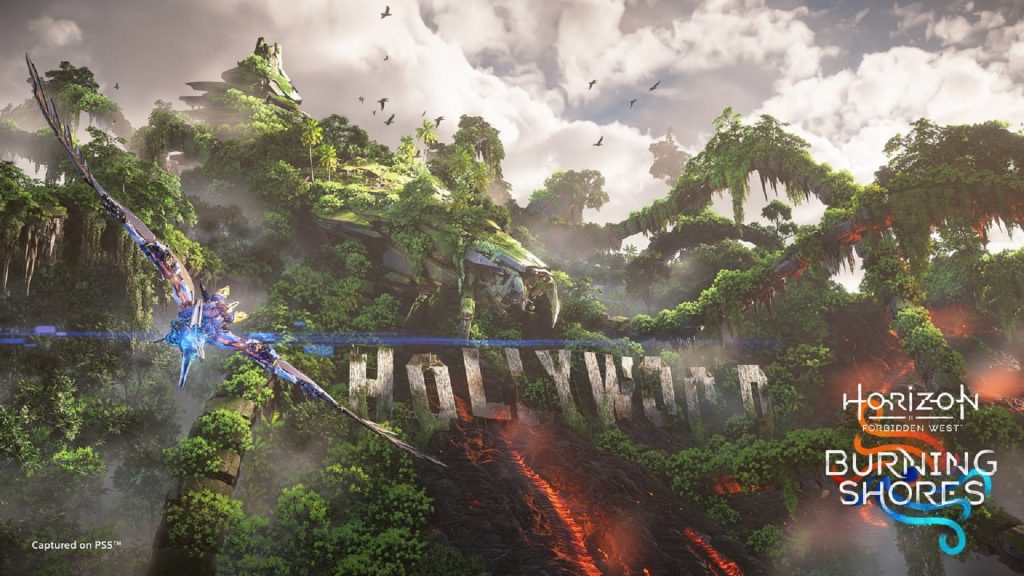 Also, in the trailer we see Aloy is donning a Quen outfit, indicating it’ll most certainly be featured as new gear which Aloy can upgrade. With de facto Quen commander Bohai heading back West across the Pacific Ocean to petition his emperor for assistance in defeating NEMESIS at the end of Forbidden West, it’s entirely plausible Alva and the few remaining Quen will abandon Legacy’s Landfall in the Isle of Spires and instead accompany Aloy on her journey southwards to the Burning Shores, lending their assistance in solving the enigma on how to defeat NEMESIS whilst battling the awakened Horus Titan. Of course, a unification of tribes hellbent on defending Earth from NEMESIS was a key takeaway from the end of Forbidden West, so the Quen being heavily involved in Aloy’s trek through the Burning Shores isn’t too much of a stretch.

Most controversially though, Guerrilla Games have opted to develop and subsequently release the Burning Shores DLC exclusively for PS5. Of course, this decision is likely Sony’s as they look to move their first-party studios away from developing for the almost decade old PlayStation 4, but it does indicate Burning Shores will be an ambitious expansion, with the fight between Aloy and the massive Horus Titan machine likely too much of a challenge to portray as strongly as the developers would want if it were created for both PS4 and PS5.