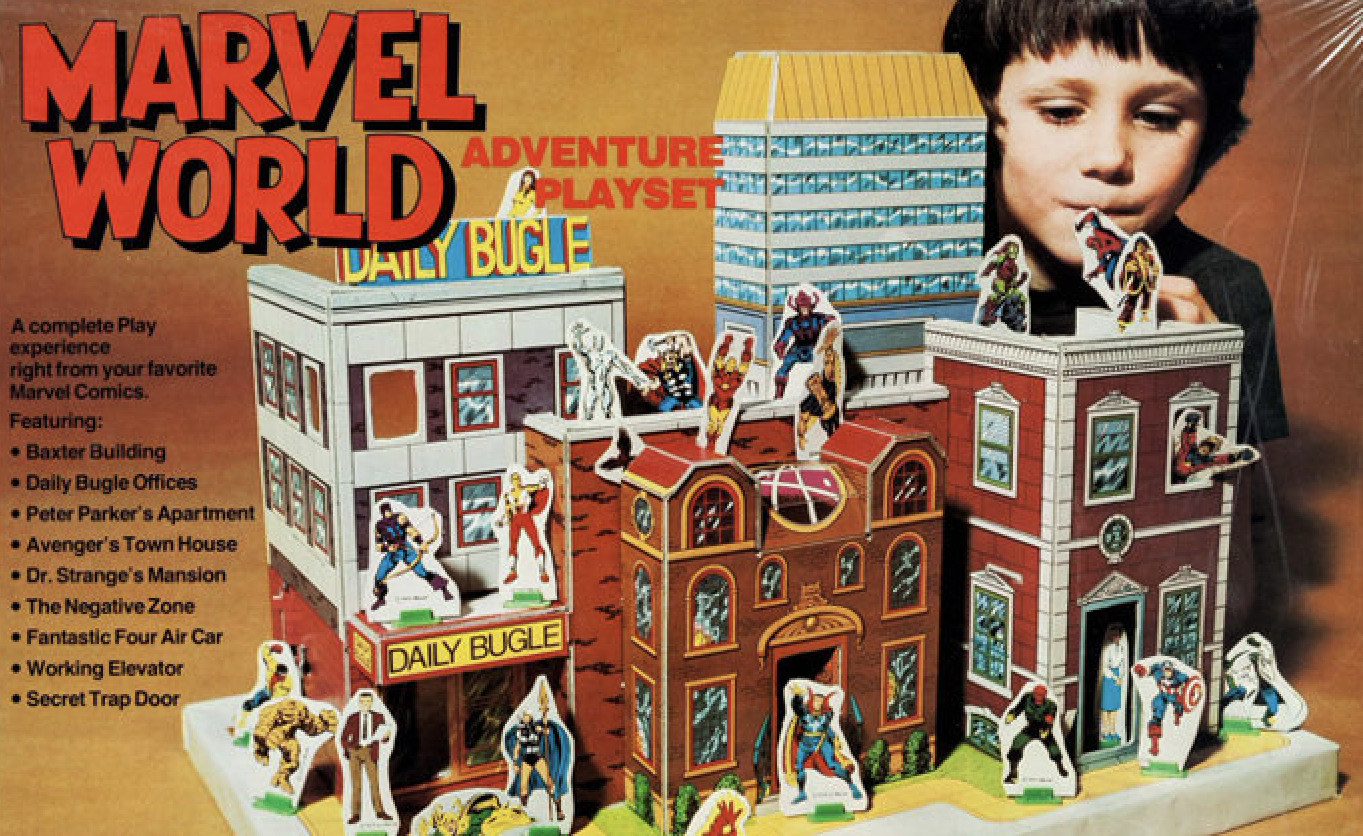 TOYHEM! Artist Ryan Dunlavey’s entrance to the House of Ideas…

Welcome to TOYHEM! For the fourth straight holiday season, we’re bringing you a series of features and columns celebrating the toys of our youth, which often made for the best memories this time of year. Click here to check out the complete index of stories — and have a Merry Christmas, a Happy Chanukah and Happy Holidays! — Dan

Ryan’s set met an untimely demise — but before that it opened a whole new universe of creativity and possibility. 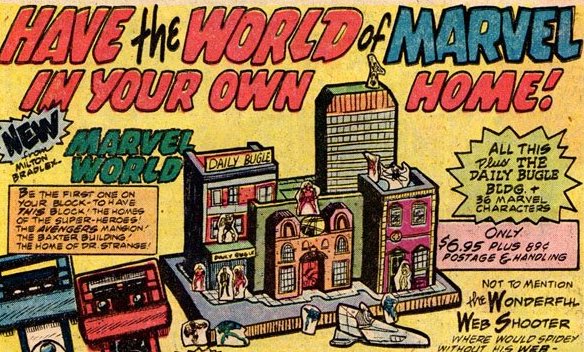 “This was a mistake.”

I had nice parents, but for my entire childhood they NEVER bought toys spontaneously for me or my brother — toys were for birthdays, Christmas, sometimes Easter and that was it. If we wanted toys we had to save our money and buy them ourselves, even when we were little. There were three times that I can remember this rule being breached:

— Once I went home sick from school and we stopped at the drug store on the drive: My mom bought me a large stuffed mouse dressed as a farmer to cheer me up (I held onto it for years until it fell apart).

— The first time my brother and I saw Star Wars toys in a store (JCPenney, spring 1978) we had an uncharacteristic synchronized meltdown and BEGGED our parents to buy us just ONE. They caved and let us each pick a figure (Luke for me, Vader for my brother). 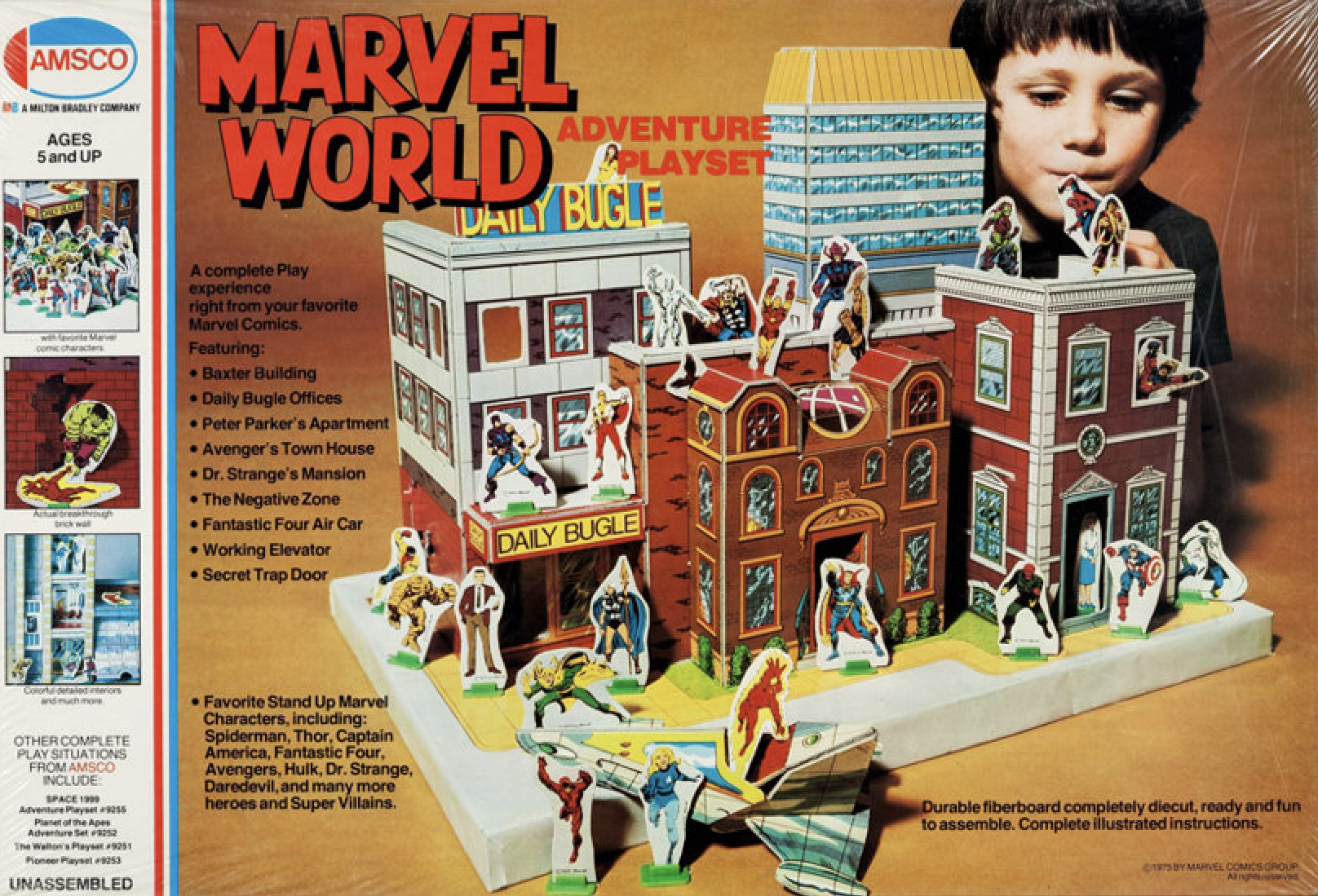 Photos are examples found around the internet.

Imagine my shock when my dad came home from a business trip early with THIS GIANT BOX OF AWESOME tucked under his arm, put out by a company named Amsco.

Now my dad worked for ANOTHER company that was ALSO called Amsco, which was short for American Sterilizer Corporation — his company made medical and surgical appliances, NOT toys. I’m sure the fact that that this box had AMSCO on the front had something to do with him buying this set — maybe some kind of trademark investigation? Who knows. (Both companies are now long-defunct: My dad’s Amsco got absorbed into a bigger company and the toy company was a sub-brand of Miltion Bradley that looks like it only existed in the ’70s.)

So he came home from work with the toy and his exact words were  “this was a mistake” and then handed me the box. Ya know, it might have just been a birthday gift that he tried to sneak into the house but got caught? It’s a mystery I will never solve. 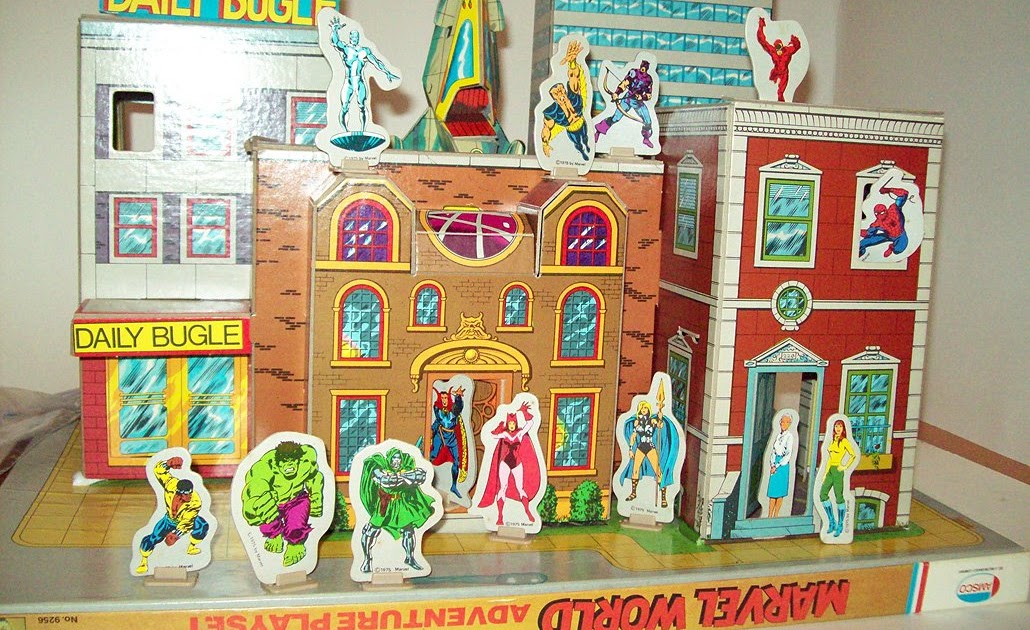 Anyway, we were so excited by the picture on the front, a full comic book super hero world! But then we opened it up. Wait — you have to put this together? Also, my brother and I were habitual watchers of Super Friends so other than Spider-Man and the Hulk I didn’t know any of these “Marvel” characters at ALL.

What’s with the kung-fu guy? A lizard man? Why is Green Arrow PURPLE?  Some salesman looking guy with a mustache?! OH NO – an old lady!!! Where’s Batman and Robin?! In my brother’s words: “Superman’s blonde and he doesn’t have a cape!” Who ARE all these weirdos?!!

So we just punched out a few figures and put them in their stands and left the rest in the box on the living room floor.

A few days later I came home from grade school to see the fully-assembled Marvel World in our living room — built courtesy of my mom at my younger brother’s request. I’m sure it was only about 2 feet high but in my memories it reached all the way up to the ceiling. 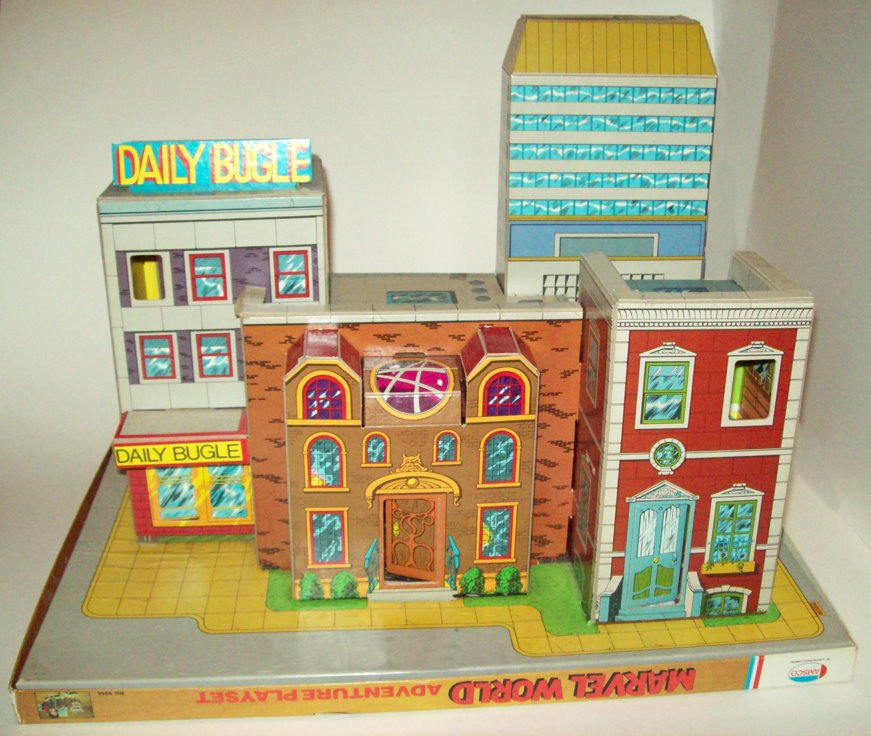 Mom had to run an errand, so our tween neighbor and a couple of his pals came over to watch us and they were even MORE excited about Marvel World than we were. They knew all the characters and places and told us their names, powers and back stories: characters with dangerous names like Power Man, the Silver Surfer, Valkyrie, Namor the Sub-Mariner and the Red Skull. We divided them into good guy and bad guy factions (most of them looked like bad guys to me and my brother) and staged them all over the cardboard landscape — smashing through the breakaway wall and tossing the little cardboard guys into the Negative Zone.

It fired up our imaginations. Soon enough we had abandoned the playset entirely and were tearing around the house pretending to be all these characters ourselves. Someone found a pack of paper plates and we all started flinging them at each other like Captain America — one of the older boys picked up two couch pillows, declared himself “DOCTOR DOOM” and my brother and I rushed at him as he swatted us away effortlessly into the couch as we all giggled like idiots. I picked up a full couch cushion and flung it back at him like the Hulk – he dodged…

…and the cushion smashed square into the chipboard Marvel Adventure World, absolutely DEMOLISHING it. Whoops. 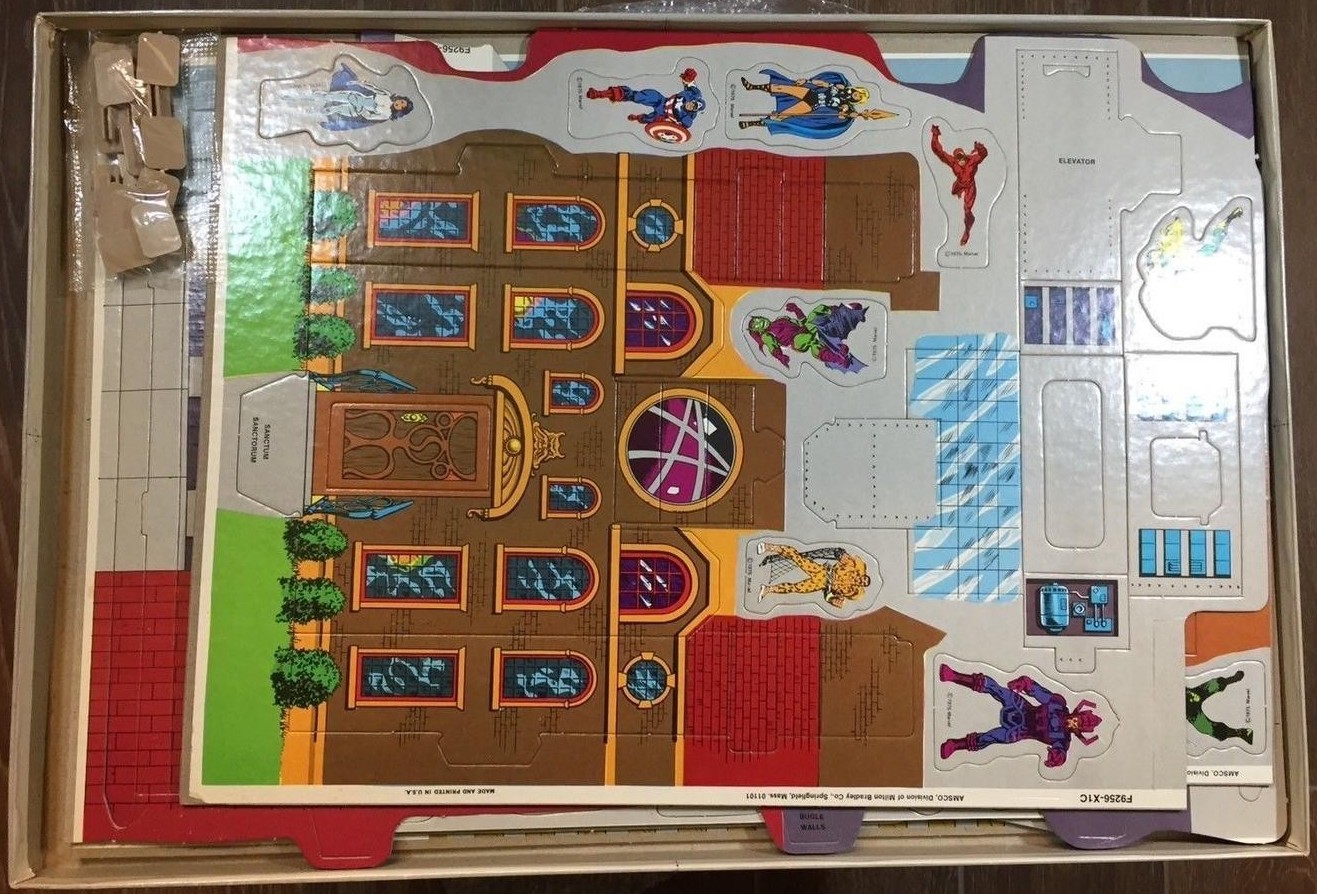 Fresh out of the box.

We tried to piece it back together but it was a losing battle. The buildings weren’t too bad but the corners of the foundation were all ripped and the tape we had wasn’t strong enough to maintain its integrity so we were just left with the loose cardboard buildings. But those soon fell apart too one by one, after a few more play sessions and I’m sure my mom just tossed them in the trash during a house cleaning.

The Fantasticar only lasted until the next bath night, where it disintegrated into paste. The cardboard figures met a similar fate when they were forgotten in pants pockets and sent through the wash. Those little plastic stands haunted our household for years – turning up in board games, the bottoms of junk drawers and Lego collections. 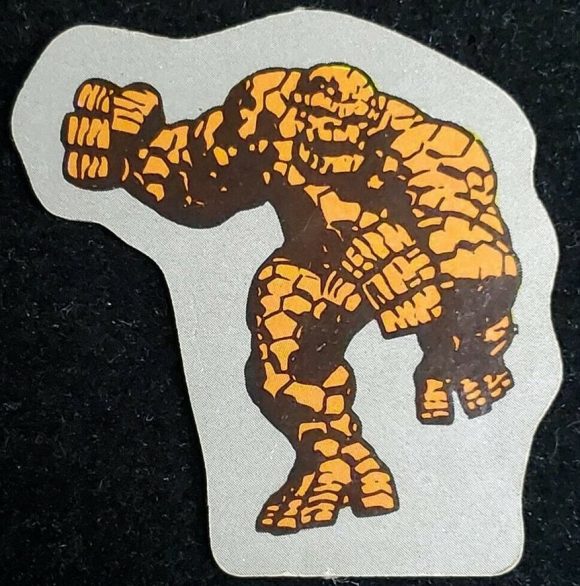 But for the few hours it existed that afternoon, the Marvel Adventure World Playset was my introduction to a whole universe of super heroes.

And it was pretty sweet.

NOTE: Ryan’s got two other great TOYHEM! memories headed your way this season — plus he’s involved with a hush-hush 13th Dimension project that will launch in a couple weeks. Much more on that to come.

— The Complete TOYHEM! Index of Features and Columns. Click here.