Raft Engine Guide: How to Find, Build and Use an Engine

Raft is one of those games that I’ve personally played since its early access in 2018. And I don’t think there are any words that would describe the process of watching this game grow other than calling this the fantastical effect of the speedy arrow of time.

The game grew from the bare concept of trying to expand a raft with nothing but a plastic hook and handmade tools to fight the occasionally approaching sharks. Now, the game is multiplayer and has more options than ever. Effectively expanding the craftable items to include tools that would help navigate the ocean, like an engine.

However, if you’re a newcomer, you might have some difficulties in your journey to find the blueprint of an engine. And If I had to guess, you’re probably also looking for a way to craft it.

Where to Find the Raft Engine Blueprint? Image via: The Official Raft Wiki

First, to craft the engine, you need to have the blueprint for it. The blueprint you’re looking for is called “Blueprint: Engine.” You can find this blueprint exclusively on a particular island called Vasagatan. And since you’re on a raft with no means of navigation in a vast ocean, you’ll need to craft a receiver first to find the closest radio tower.

How to craft a receiver?

According to the official Raft wiki, for you to be able to craft a receiver, you’ll need to collect the following materials:

How to use a receiver? Image via: The Official Raft Wiki

However, before collecting these materials, you’ll need to finish researching the battery on the research table. Keep in mind that the research will require at least one copper ingot. The battery is required to power a wide array of electrical items. So make sure to craft enough.

After turning on the receiver for the first time, the game will automatically give you the first four digits of the radio tower. Consequentially, you will find the four-digit code of the first story-connected island, Vasagatan. There you will find the “Blueprint: Engine.”

Nevertheless, to navigate further. You’ll need to change the numbers in the receiver. Once the small light beside the number screen turns green, that means you found an island connected to the story. The first one is the one we mentioned before, which is called Vasagatan.

How to Build a Raft Engine? 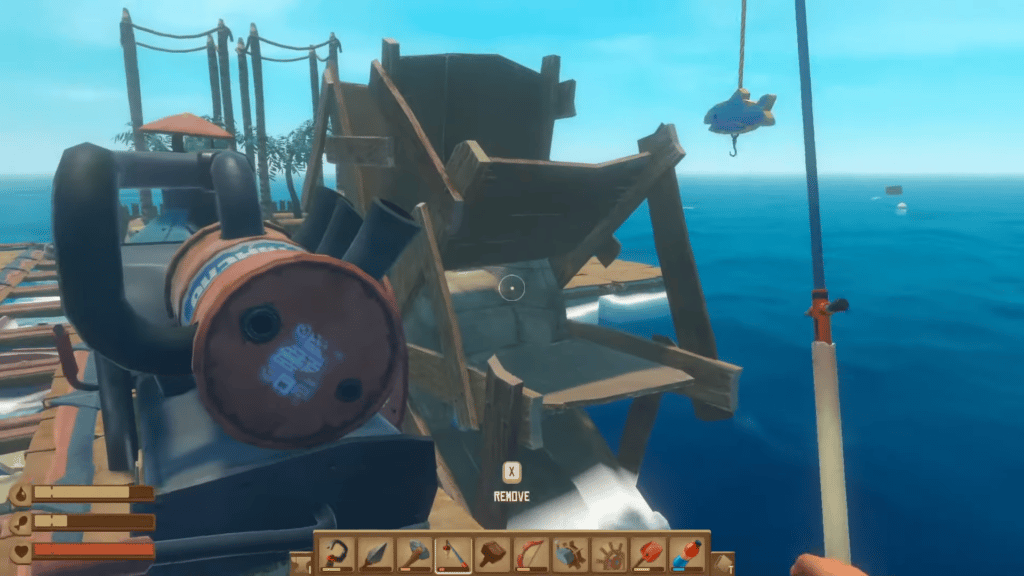 So, you have found Vasagatan. From here, things get pretty easy. You will need to locate the Shipwreck, which is not that difficult to locate; it’s pretty monumental. You will need to enter the shipwreck and investigate for any items that you can loot. Correspondingly, you’ll most likely stumble upon Blueprint: Steering Wheel, likewise the needed blueprint to craft an engine for your raft.

After that, you can craft an Engine in Raft once you have collected the following materials:

You can place the engine anywhere on the raft as long as it is placed next to the water. To turn on / turn off the engine, press the button “E” on your keyboard. Furthermore, to be able to navigate more precisely rather than just mindlessly sailing in foreign water, you can use the sail to direct where the engine is thrusting.

On a final note, you will need fuel to keep the engine running, so make sure to put some planks in reserve. Just in case you run out of fuel, so you don’t have to rely on the wind. There are a couple of resources that you can choose as a fuel for the engine, Biofuel would be the best option, but wood planks are the most common.

For you to have a full fuel tank in the engine relying on planks only, you would need about 17 of those. I most certainly rarely use the planks as a method to fuel the engines on the raft. However, your decision is not exactly up to me. I would be more than happy to know which fuel you use for your raft engine.

Also, do tell us, did the guide help you? Did you encounter any problems trying to work with the guide? Your feedback is always appreciated.

The post Raft Engine Guide: How to Find, Build and Use an Engine appeared first on WhatIfGaming.