Doraemon Story of Seasons: Friends of the Great Kingdom is a farming simulation game for the Nintendo Switch. It’s somehow both a spin-off and a sequel, bringing the second quirky tale of a robot cat and his friends into the farming world of Story of Seasons.

For those unfamiliar with Doraemon, he’s a popular Japanese manga and anime icon. In fact, he’s been around since 1969. And if you’ve never played Story of Seasons, simply put, it’s a farming management sim akin to Animal Crossing or Harvest Moon (which is actually how the Story of Seasons series came to be .. but that’s another tale). 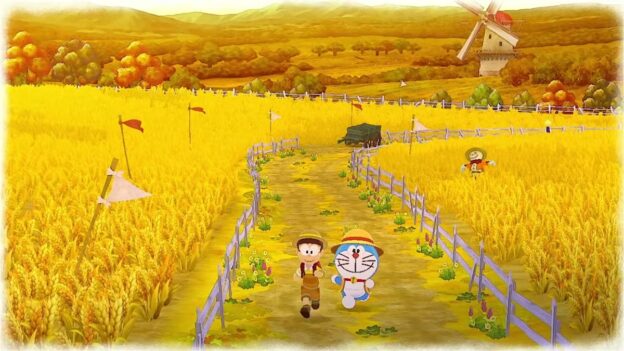 The plot involves Doraemon the blue robo-cat and his posse of pre-teens, who unintentionally travel to another world to escape their summer chores back home. They somehow find themselves running a farm (which seems like way more work than their mums and dads had planned for them back in suburban Japan). Still, they take on the task with some newfound relish to help out the locals. There’s probably a lesson in there somewhere.

What makes Story of Seasons interesting is the seasons part of the title. Gameplay revolves around the passing of time, with the hours, days, weeks, and months flitting by quite quickly. This leads to a change in season, bringing new seeds to sow, creatures to catch, and scenery to enjoy. While Animal Crossing also sports a lovely seasonal change, it reflects our real-world seasons based on where you live. Story of Seasons continually moves through time as you play, so you can whip through an entire year in a matter of real-life hours. 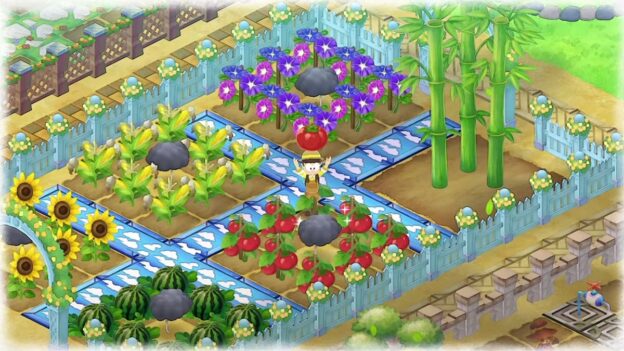 In Animal Crossing, you create your own town, encouraging new neighbors to move in as it progressively develops around you. While there are some building elements to Story of Seasons, it’s more about tending your farm. Literally. There are trees, rocks and weeds to clear, seeds to plant and water, crops to yield and sell, and a property to maintain. It’s a fun routine. One aspect I enjoyed is that your character grows tired after performing chores. In these cases, you need to nap or eat to regain energy. There’s a sense of time management at play, since there are only so many hours in one day; if you don’t get to bed on time, you’ll sleep late the next morning and waste many hours of sunlight.

There’s also a solid narrative embedded. This is both a positive and a negative aspect of Doraemon’s second farming sim. On the plus side, the story makes for a fun single-player adventure as you learn more about the characters around you and work together to grow your farm into something special. On the other hand, this isn’t a visual novel, and the lengthy dialogue often interrupts the flow of the gameplay. 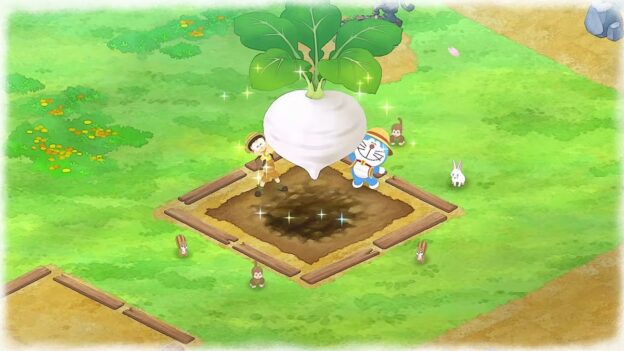 Yes, the plot may be interesting, light-hearted, and even emotional at times, but sometimes it’s too much. A prolonged introduction and multiple cutscenes might be just what Doraemon fans clamor for, but it drastically slows the pace of the game. The cast is entirely voice acted – a nice touch – however it’s also entirely in Japanese. While this feels authentic for the subject matter, it means there’s a lot of on-screen text to read. I love a good visual novel, yet I found myself frustrated by the constant interruptions when I just wanted to tend to my plants before the sun went down.

Graphically, there’s a lot to like about this title. Doraemon and company are well designed, with anime-authentic sprites that look and move well. The environment is also a treat to behold, with detailed surroundings that leap off the screen. As mentioned, the seasons change to bring new elements to enjoy; no matter which season, it’s always visually striking.

As gorgeous as these visuals are, the map is another source of frustration. It’s not intuitive and, although it becomes easier to navigate with practice, the pathways aren’t obvious. Coupled with the plot-based interruptions, it works against itself to slow down the pace of the game, making trekking between locales a chore.

Overall, Doraemon Story of Seasons: Friends of the Great Kingdom is a crossover title that’s likely to appeal to fans of Doraemon and Story of Seasons. If you don’t fall into both camps, I’d stick with a more generic farm-sim outing. It looks fantastic and has a deep narrative, although it often gets in the way of the actual farming.