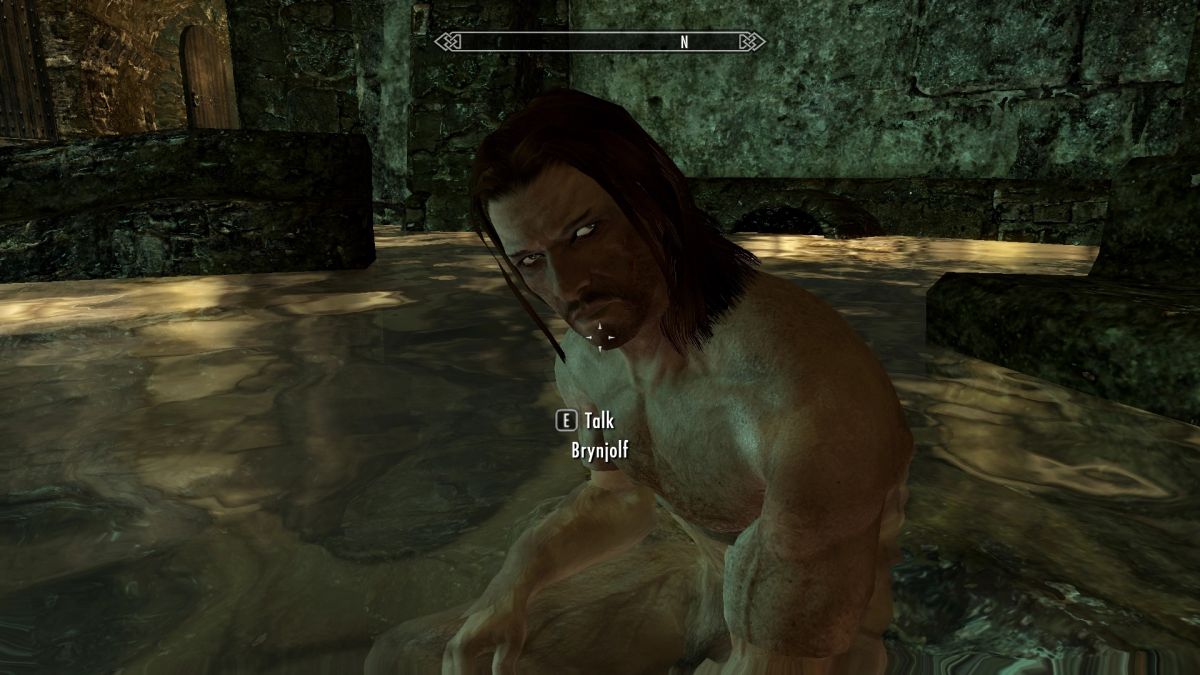 Normally you slog through Skyrim's underwhelming Thieves Guild questline, inevitably replace the guildmaster, and feel a hit of ennui strong enough to make you question the hundreds of hours you spent playing Bethesda's RPG. Or maybe that's just me.

You do score a suit of armor, a magic amulet, and the key to a tribute chest that occasionally fills up with loot, but your life as a crime lord just sort of tapers off. Even your second-in-command Brynjolf, who recruited you back in the Riften Marketplace at the start of the questline, apologizes and says, "I've got important things to do," when you try to interact with him from then on. The rude wanker.

That wasn't good enough for Elizabeth Jackson Hall, who created a mod called Brynjolf Has Time For You to insure the business-like criminal would still want to talk once you replace his boss. That was four years ago, and I guess it still wasn't enough for Hall, who has now released a more significant, fully voiced quest mod called Brynjolf and the Riften Guild – Birthright to expand the expansion even further.

This mod includes four dungeons, thousands of lines of additional dialogue (including over 2,000 lines for Brynjolf alone made by editing his existing dialogue, plus seven brand new NPCs voiced by volunteers), and multiple quests. Yes, one of those quests lets you romance Brynjolf.

Brynjolf and the Riften Guild – Birthright also includes a questline to let you finally figure out what's going on with Rune, an amnesiac member of the guild who survived a shipwreck but lost his memories. Previously you could promise Rune that you'd "keep an eye out" for things related to his past, but the plot thread never went anywhere. Now it does. You can also unlock the guild's Vault, make Brynjolf your follower, bathe in the waters of the guild's hideout, give Brynjolf some soap to encourage him to join you, and explore some extra forsworn crypts and dwemer ruins.

To install the mod you'll first need to install the Skyrim Script Extender if you haven't already, then grab the file from Nexus Mods where it's available to download for both Skyrim Special Edition and Oldrim. To begin the mod you'll need to have done the Thieves Guild storyline up to completing the climactic Darkness Returns quest, then check out the red journal that's been added on a bookshelf near the entrance to the guild's Cistern headquarters.

To start the questline involving Rune you'll need to chat to Vekel, the bartender of secret thief pub, the Ragged Flagon. To open the Vault talk to your regular questgiver Delvin, and if you want to be more than just friends with Brynjolf you'll need to wear an Amulet of Mara, one of the necklaces that signal your eligibility for marriage in Skyrim.

Here are more of the best Skyrim mods and the best Skyrim Special Edition mods. Have a look at Sneak Tools to add thiefy options like water arrows, throat-slitting, and blackjacking, as well as Ars Metallica – Smithing Enhancement if you'd like to be able to craft your own lockpicks and arrows.