The celebrated Mr. K pays a BIRTHDAY SALUTE to the fan-favorite artist, who turns 75… 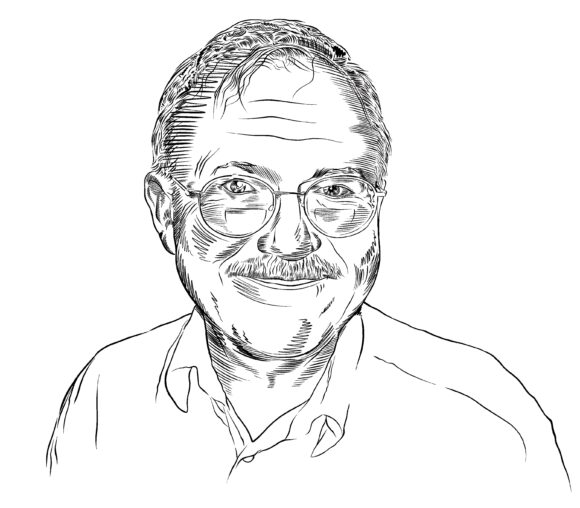 Joe Staton (born January 19, 1948) and I go way back to the very dawn of time. Or at least the 1970s when editor Paul Levitz teamed us up for the newly revived Doom Patrol feature in the also newly revived Showcase title.

I was already a fan of Joe’s work from his years at Charlton Comics, where he drew dozens of stories as well as co-created E-Man with Nick Cuti, and his run with the aforementioned Paul on the Justice Society in All-Star Comics. Joe could draw just about anything, from the most outrageous of superheroics to the sublime silliness of talking cars in the animation style of Charlton’s Wheelie and the Chopper Bunch. 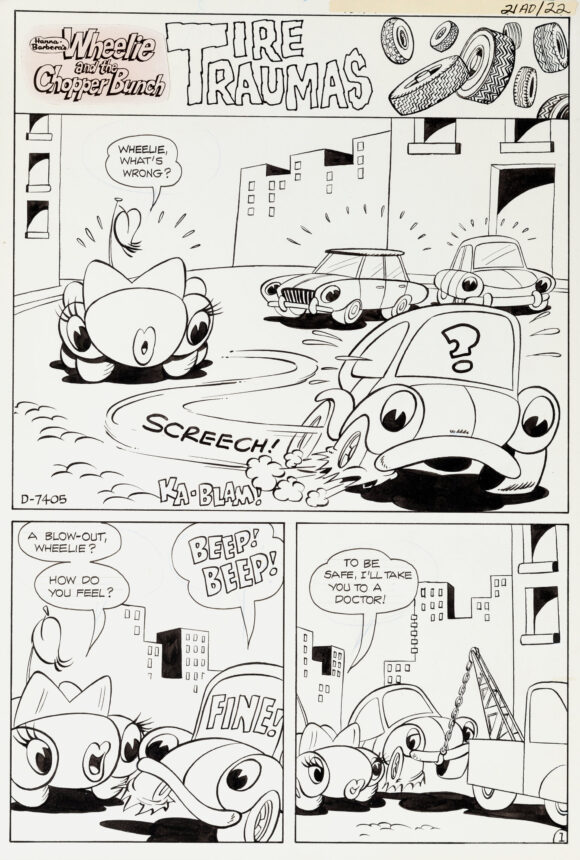 Joe has had a long and successful career in comics, the beginnings of which we discuss at some length in my new Direct Conversations: Talks with Fellow DC Comics Bronze Age Creators (now available on Amazon, thank you for asking!) and I have been fortunate enough to get to work with him any number of times across five of the six decades in which he’s been in the business. When I needed someone to write the introduction to Paul Kupperberg’s Illustrated Guide to Writing Comics, I asked Joe if he would do the honor, figuring he may not be the artist I’ve worked with most in my career, but he’s definitely the one I’ve worked with over the longest period of time. I don’t think Joe and I have done anything together yet in the current decade, but the 2020s are still young. 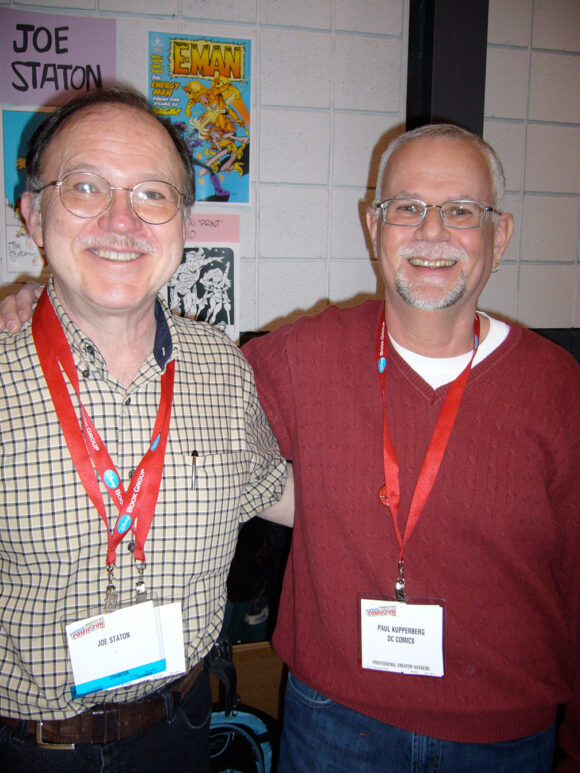 Here then, and with my sincerest wishes for a happy birthday, are MY 13 FAVORITE COLLABORATIONS WITH JOE STATON:

Showcase #94–96 (Aug./Sept. 1977–Dec. 1977/Jan. 1978), DC. Two titles back from the dead in one: Showcase and the Doom Patrol, the super team that readers had watched die years earlier in the last issue of their own book. But nothing stays dead in comics, and this was the start of a beautiful friendship between Joe and myself… as long as I promised to never again write anything for him that involved his having to draw horses. Showcase #100 (May 1978), DC. An epic, all-star tale that an artist would have had to have been crazy to want to draw. “There Shall Come a Gathering” was a tale concocted by Paul Levitz and myself that featured every character that had successfully spun out of the first 99 issues… but it was Joe who took it on himself to add the ones we’d left out in the belief we were going easy on him. Crazy, right? 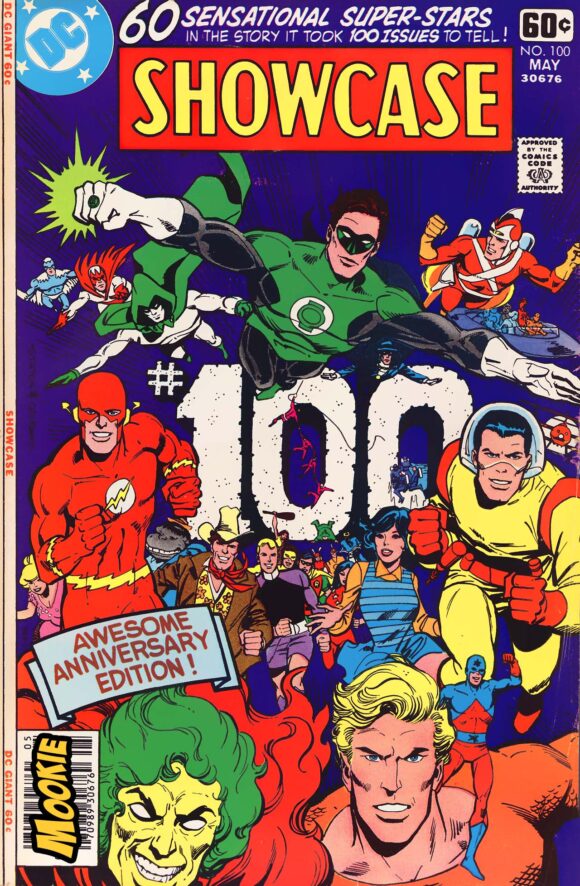 Superboy and the Legion of Super-Heroes #249 (March 1979), DC. “The Arctoraan Jewel Case,” a bit of 30th century fluff featuring Reep (Chameleon Boy) Daggle of the Legion, which Joe handles beautifully despite it containing such dialogue as “Carp City, here I come!” 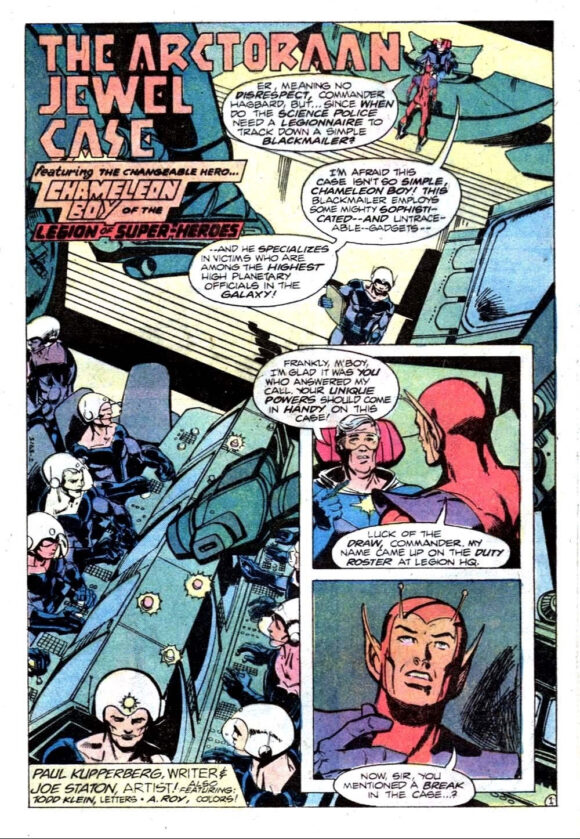 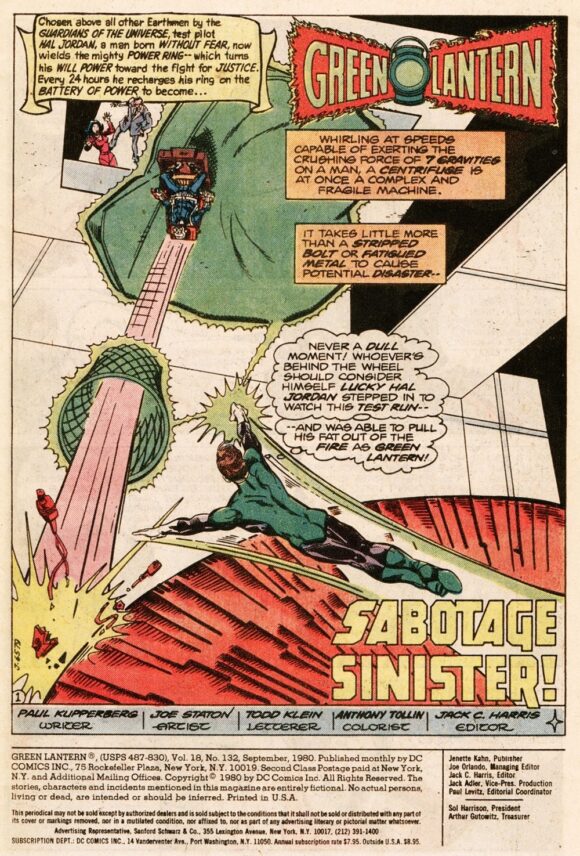 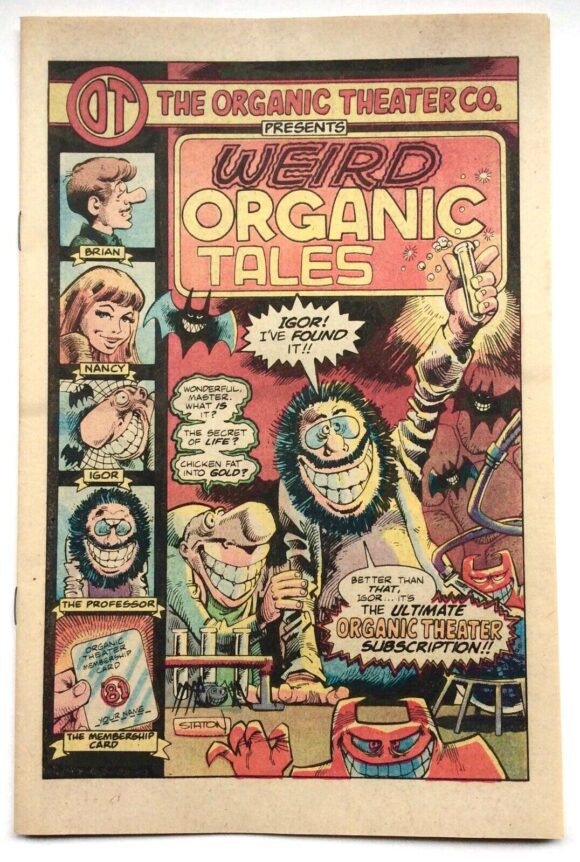 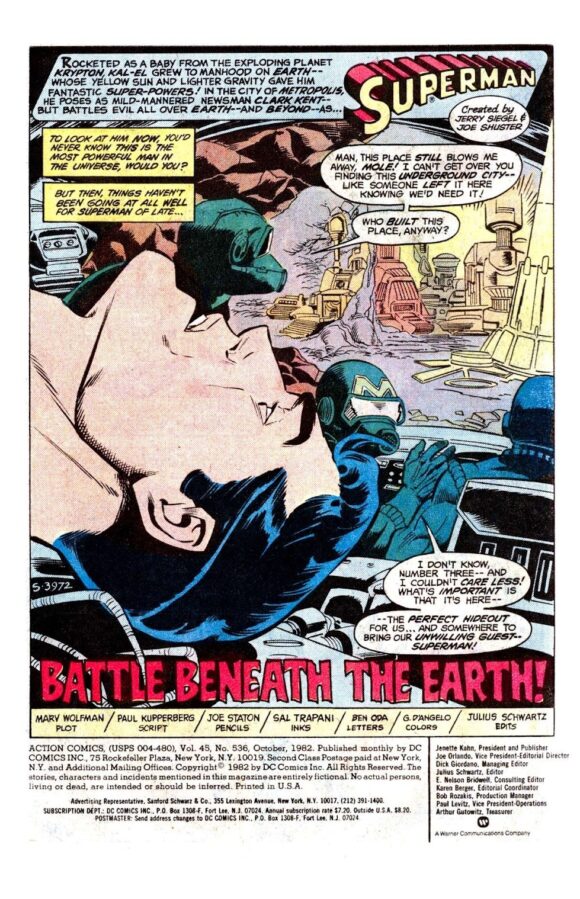 E-Man #8 (Nov. 1983), #10-11 (Jan. 1983–Feb. 1984), First Comics. Another dialogue job, this time for First Comics over a plot by my good friend Marty Pasko and, of course, featuring art by E-Man co-creator Joe Staton. Sure, “Love Means Never Having to Say You’re Larry”… but sometimes it’s getting to say you got to write a favorite character like E-Man with the guy who created him. 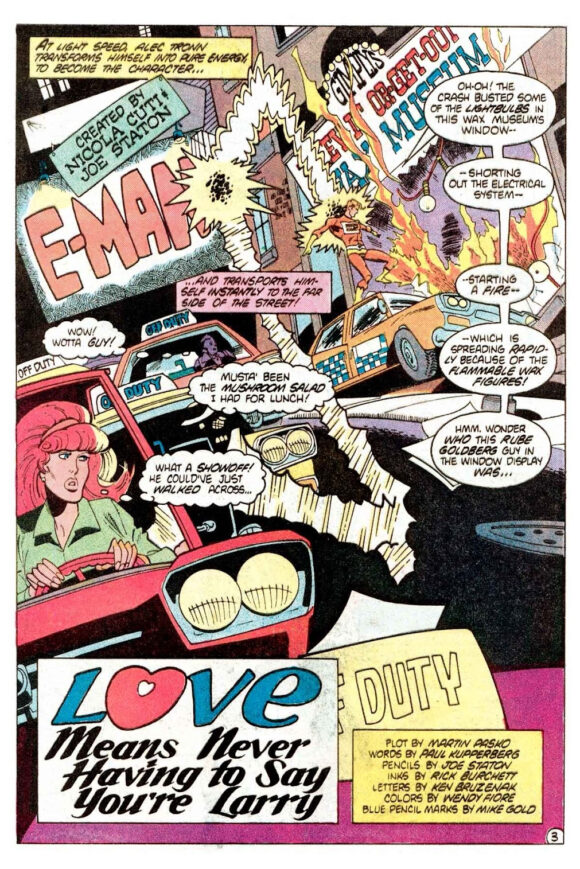 DC Challenge #7 (May 1986), DC. I didn’t know what was going on then and I still haven’t figured it out, but that didn’t stop me contributing my chapter to that ongoing, round robin fan-favorite DC Challenge. The “challenge” being to make sense of any of it. But as ever, Joe went along with the gag (whatever it was) and drew the hell out of my nonsense… which was lovingly inked, I might mention, by Steve Mitchell, another old friend with whom I spoke for Direct Conversations: Talks with Fellow DC Comics Bronze Age Creators (still available on Amazon, by the way!) 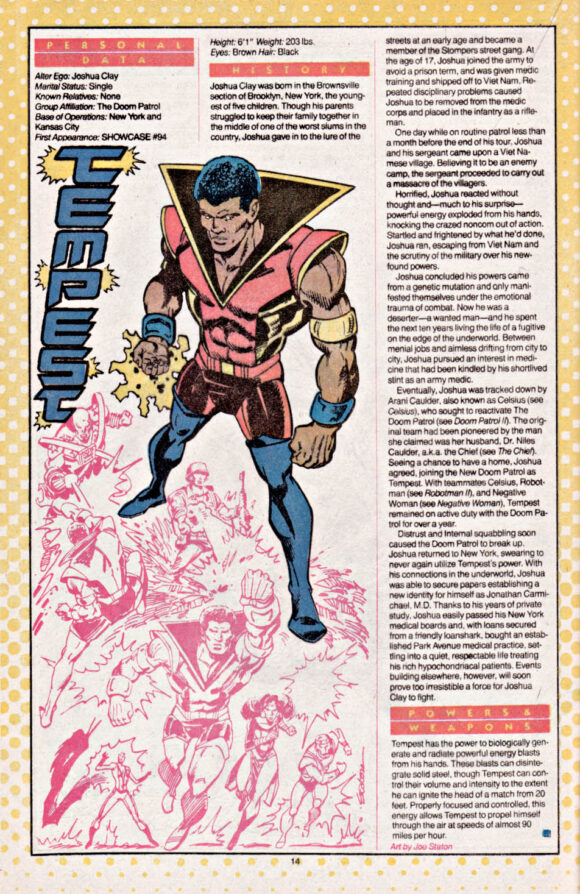 Gross Point #6 (Dec. 1997), DC. I reunited with not only Joe but Marty Pasko as well for “You Can’t Get There From Here,” this time with Marty as editor and me writing the full script for this bizarre but brief entry in the DC catalogue. 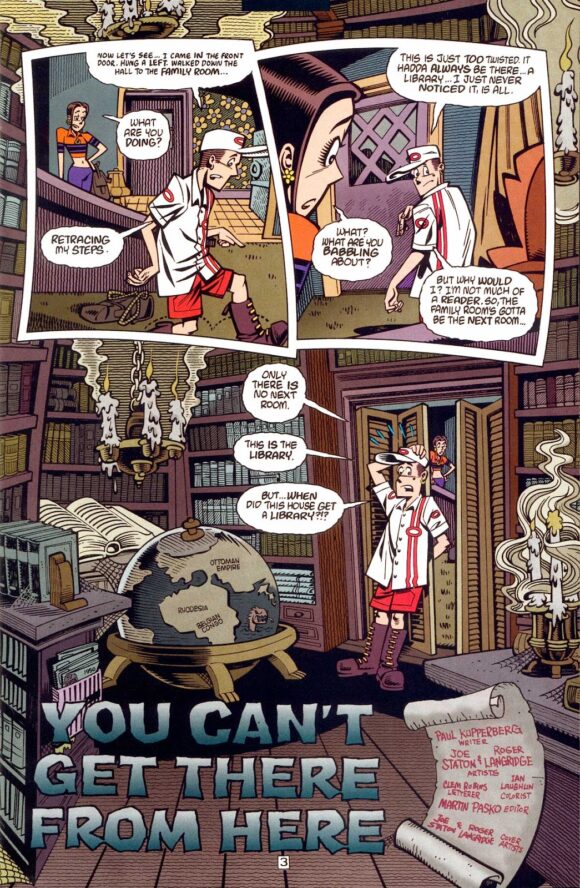 WWE Kids Magazine #1 (2008), WWE. During my (very!) brief tenure as an editor on this kids’ magazine for World Wrestling Entertainment, I tried to class up the art in the comics section with such names as John Byrne, Steve Lightle, and, yes, Joe Staton. Only the initial, single installments of the features I wrote for these gentlemen ever made it to print, including Joe’s “Turnbuckle and Tag,” a dog and hedgehog with a strange S&M relationship. 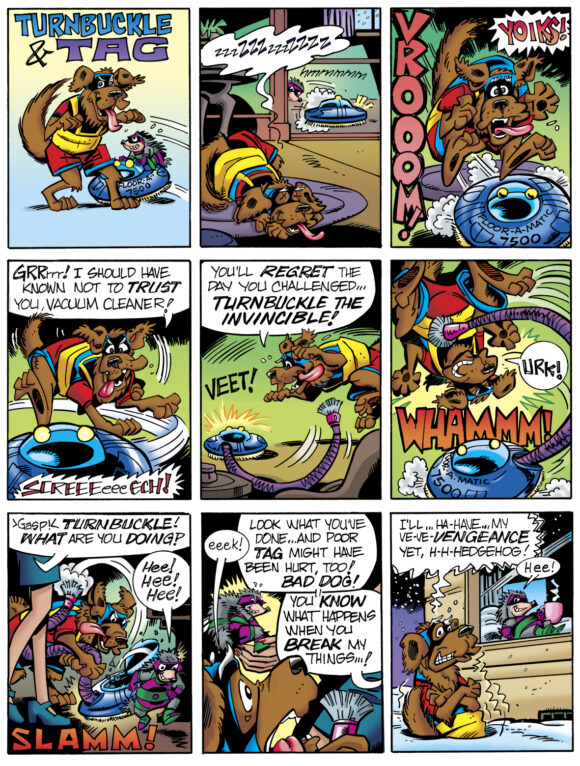