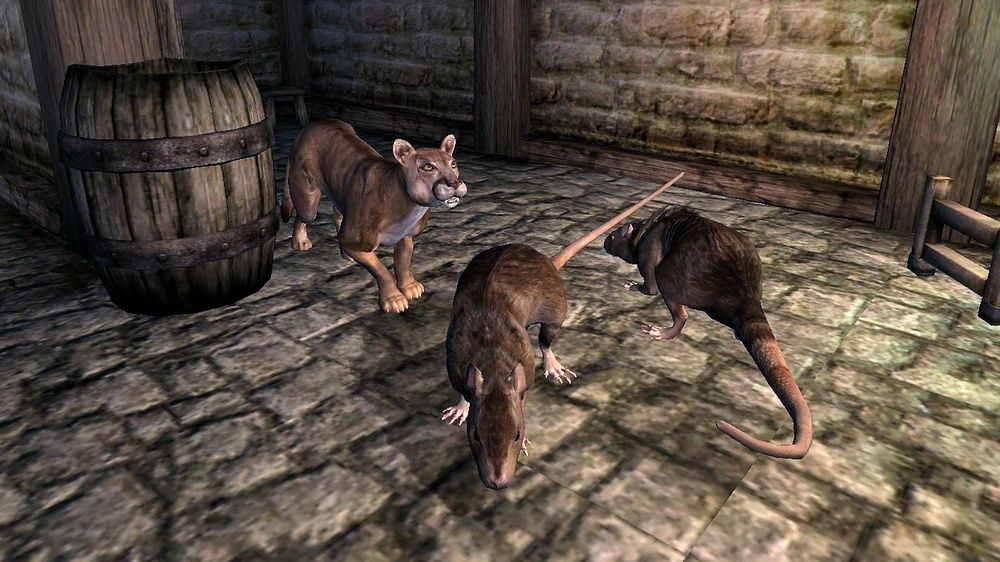 Oblivion's rats are now as uncouth as they are unclean, thanks to a mod from creator DavaScript that imbues the game's rodents with all the unbridled rage of early 2000s internet. The Swearing Rats mod uses clips from an infamous (and ancient) Ventrilo user meltdown to turn their squeaks and yelps into a barrage of inventive invective. There is no reason for it to exist and we should all be very thankful it does.

The mod is scarily effective. Hearing Oblivion's rats—probably the weakest enemies in the whole game—threaten to tear off various of my appendages and find new homes for them in other parts of my body really does make them quite a bit more intimidating than they usually are. It's like being pursued by a hundred four-legged versions of Malcolm Tucker; I can't think of anything more terrifying.

I refuse to believe that there is anyone old enough to read this website who does not also remember Ventrilo, but just in case: It was pretty much an early-2000s Discord, enabling you to voice-chat with friends while you played games like DotA (no, the other one). It was engraved in the annals of human memory for eternity by a Basshunter song, for reasons anthropologists haven't been able to explain, and now lives on in the form of this strange, wonderful mod.

The Ventrilo meltdown in question is attributed to a thankfully-pseudonymous user known as Miss Peggy, who has hopefully mellowed out a bit in the years between then and now. Miss Peggy fell victim to a common Ventrilo prank at the time: Someone used a Duke Nukem soundboard to work them up into an increasingly-violent tizz, until it reached the point where they were threatening Duke with physical violence. It was, to be honest, pretty immature, but it did produce the incredible phrase "Get off Vent or I'll have you bent," so it's impossible to say if it was bad or not.

It's not DavaScript's only mod, but it's probably the one most likely to take off. Most of the rest consists of things like Decreased Torchlight Radius and Death Notifications. I guess there is the Sounds of Defecation mod, but I refuse to try that one for the sake of what's left of my dignity.