Want to see a voxel engine running on Dreamcast? 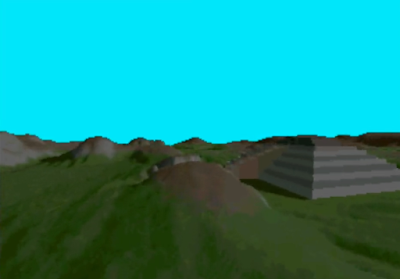 Again I ask: want to see a voxel engine running on Dreamcast? Of course you do. And now you can. See, programmer Luiz Gustavo (aka NaReeZ) has been working on a Dreamcast voxel engine for the past few weeks and has already produced something rather special:

As you can see, this short clip shows the disembodied camera roving across a rather nice landscape of lush green valleys, rolling hills, temples and rivers. It's all very tranquil, I'm sure you'll agree.

I first heard about this while browsing Dreamcast-Talk, and there's some interesting discussion in the thread about voxel-based games such as Outcast, which was rumoured to be coming to the Dreamcast at one point but then fell off release schedules as time went by.

I guess it shouldn't really come as a surprise that the Dreamcast can handle a voxel engine, especially since the Sega Saturn did it in commercially released title Amok (or A+M+O+K as the game refers to itself); but it is very encouraging that an independent developer is able to squeeze such an impressive looking and fluid engine out of the Dreamcast in a relatively short period of development time.

Voxel Space Engine Dreamcast with fixed resolution, Software Double Buffer and transferring data from RAM to VRAM using Store Queue Transfer(similar to DMA). It loses 15 to 20 FPS but it runs smoothly. Is there any way to implement double buffering without losing FPS?@sseraphini pic.twitter.com/f3ZhBhbBRm

As it is, the engine - titled 'Voxel Space Engine Dreamcast' - is quite bare bones and is clearly in the 'tech demo' stage at the time of writing, but who knows where this could lead? A homebrew port of Outcast on Dreamcast, anyone? A Dreamcast port of Amok that runs above 8 frames per second? We can but dream...!

We'll be keeping a close eye on Luiz's progress, and if any helpful programmers can assist please do follow him on Twitter or get involved over at Dreamcast-Talk.